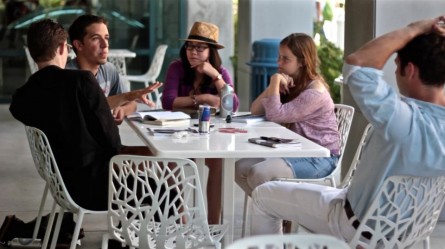 Wheatstone’s summer conference just ended. We had a week of great seminars, workshops, cultural events, and (maybe most importantly) small group discussions. It’s incredible to walk around a conference campus and see clusters of students or educators discussing hard ideas with a Wheatstone mentor. Intent faces. Wild hand gestures. “But what does it mean to be noble?”

By the end of the week Wheatstone mentors are completely exhausted, but even at our staff party–with interns and managers and mentors sprawled asleep on every horizontal surface–they keep on discussing. And then, well, they discuss some more. Last night, a few of us spent another four hours talking about education. Again. Tomorrow, I’ll be discussing Coriolanus with them. Again. Why? Because we really, truly believe in it. We see it as essential to our own growth–essential to a life characterized by imitating Christ and pursuing truth.

Discussions are, admittedly, a little bit crazy. Especially the kinds of discussions that we have with students at Wheatstone, where hand-picked high-quality mentors try to find truth with a group of high school students–most of whom have never had long discussions before, have just read Plato for the first time, aren’t used to hearing open questions, and, in many ways, are simply young.

Every mentor comes into those discussions, not with performance goals for the students, not with expected outcomes, not with pre-arranged intellectual tracks, but rather with a sincere belief that, together, their group might find the answer to a question that’s bigger than they are. They don’t believe this because they’re interacting with experts, or with exceptional human beings. They believe it because real discussion with other humans is maybe the most deep and meaningful way to find God’s truth. No matter who those humans are. No matter what.

You probably caught my loophole. I managed a sweep into inspiring generalities because of that lovely little adjective: real discussion. Just talking doesn’t make that cut, and neither do plenty of other things that we think of as discussions.

I could say a lot about what makes a discussion “real.”

And, in fact, I just did. But what I want to dive into deeply here is how real discussion relies on three key virtues without which it cannot keep going. “Real” discussion requires faith, hope, and love. 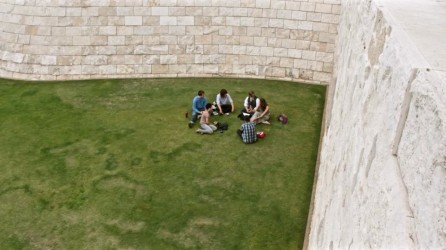 One of the biggest impediments to real discussion is a group’s inability to walk along the same intellectual path together. One person accepts one set of ideas and starts tinkering with them, while another person accepts a different set and tinkers with those, while a third person mopes about the fact that the first two’s sets are different, and a fourth decides that, well, everyone must be wrong. Everyone is in the room, everyone’s thinking, and everyone may even be talking, but no one is really discussing. You aren’t really discussing until you’re together. And being together like that requires faith. It requires that the whole group find things to affirm together and use together in their pursuit of truth.

For that reason, an insistence on continuous certainty by any discussion group member is absolutely fatal to the discussion’s progress. In order to think together, discussants must be willing to say “well, okay,” to ideas they don’t definitively know, discussants must remember the ideas so they can return to them critically should it turn out they aren’t helpful, and discussants must use the ideas, moving boldly forward.

Augustine prescribed the intellectual orientation “faith seeking understanding” as an eminently Christian one, but it’s not a Christian prescription because we need it in order to justify our faith’s irrational bits. Our faith doesn’t have any of those. No, it’s an eminently Christian intellectual prescription because it’s essential to humble, communal thought of any kind. Intellectual activity without faith must be solitary, must be expert, and must be systematized. That kind of intellectual activity isn’t bad; it’s very, very good. But it isn’t discussion. Discussion requires faith, because it only happens when people are walking along a single intellectual path together. 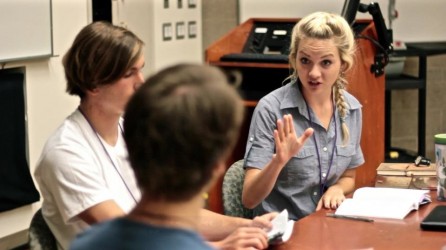 Since discussions don’t necessarily build off of a system of certainty that’s pushing them forward, they need a different motive force. They need to be pulled from ahead. If you’re engaging in discussion as a method for finding truth, you’re acting on the off chance that truth is the sort of thing that humans are made to find together, and that it’s somewhere just up ahead. You’re hoping.

Without a hope that reality’s out there waiting to be apprehended by bands of companions who help each other out, the whole process is simply inefficient, or else merely good for people who aren’t good enough on their own. Without hope, discussion depends on expertise. And as soon as discussion depends on expertise, it’s susceptible to the accusation of slowing experts down. “Why should I spend the time to explain this to you?”

On the contrary, real discussion is a practice in a kind of humility: a self-submission to an up-ahead goal that you don’t yet see. Since you don’t yet see it, and since humans are the sorts of things that are for finding reality, you can look to any discussion partner and say, “Maybe they’re about to say truth! Maybe, in the very next moment, the Spirit of God will speak through them!” You never know, and that’s why it’s wonderful. If you begin operating with that hope, really expecting your discussion partners to reveal God’s truths, you’ll be amazed how frequently you’re rewarded, and how frequently it comes from sources you might have otherwise dismissed. “Out of the mouths of babes” (and high schoolers…), as they say. 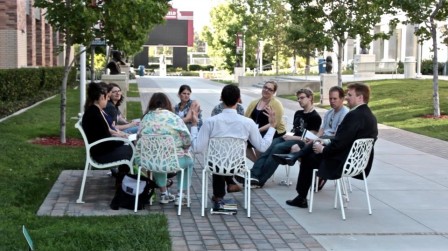 Seriously. How will you persist in attentively, humbly listening to anyone without loving them? I mean, it’s just so hard to understand what people mean/feel/wish/do! And when you spend as much time with a person as a thorough discussion requires, you’ll pretty much inevitably find things about them that rub you the wrong way. You’re not going to keep going, or start going, or finish well, unless you love the people around you in spite of their seeming flaws.

Of course, if you insist on loving the people with whom you discuss, you’ll end up discovering that they’re lovely. Flaws may present themselves first or flashingly, but the image of God is deepest and truest. In discussion, you really get to glimpse it.

And (everyone knows this) you won’t get anywhere in discussion (or anywhere more than a therapy circle would) unless you decide to love the thing you’re looking for together. Some people poorly rephrase this idea as “You’ve got to care about it,” or “You need to want to discuss.” Those are close, but too little and too light. You have to throw your love out ahead of you into the thick of your question and risk getting no response, or you’ll not search honestly, piercingly, and constantly.

I cannot say beautifully, quietly, or powerfully enough what the love that discussion produces is like. My deepest friends are often the ones with whom I’ve discussed the most because I’ve seen them, and they’ve seen me, and we’ve shared the world between us. And my abiding wonder at the world was built up, facet by facet, by struggling to see it with those friends. Because I’ve discussed, this world gets lit constantly for me by the memory of shared labor with good women and men, and by the deep order inside things that our labor helps me to see. I pray more fluently, and I worship more freely–impetuously, even–because of this love that discussion produces.