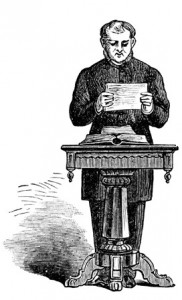 The Evangelical Theological Society is having its annual meeting next week. As a veteran of a dozen ETS conferences and a bunch of other scholarly gatherings, I offer here a few tips about how to present a paper. I have heard, and I have delivered, some bad presentations, and have learned from trial and error. But I’ve also seen some great presentations, and have tried to name and describe what I saw, in hopes of seeing more of that kind of thing.

1. Write the kind of paper you wish somebody would give. This is a sort of geeky application of the golden rule. But especially for a group like the ETS, there can be a tendency to look through the bulletin and say, “Why doesn’t anybody ever give papers on ________?” Stop complaining, and be the anybody. So Czech ontotheology is under-represented by the small-minded nabobs of evangelicalism? Septuagintal hiphop is neglected by these stuffed shirt perfessers? Left-handed cuneiform scribes are misunderstood by the dextronormativity of the tweedmonkey mafia? Or maybe something actually important isn’t being said by anybody currently giving papers. Seriously, propose a paper on it. Give your paper a luminously clear title, so everybody knows what you’re going to talk about. The right kind of people will show up. Then you can be friends with them. This is how little scholarly networks get going.

2. Read, but read well. The conference paper is its own weird genre of public speaking. There’s a sweet spot of perfect delivery, and it involves following your script (thus guaranteeing that you’re not up there just, you know, saying stuff). But it also includes some eye contact, the ability to speak long phrases without looking down, and to make a few gestures now and then. Take the script you’re going to read from, and mark it up for oral delivery. Underline words you want to emphasize; gather natural groups of words together in parentheses so you can say them as a unit; and choose a couple of places per page to slow down on purpose (you’re almost certainly talking too fast for too long at a stretch). Finally, plan some spontaneity. That is, if you’ve got a short narrative or illustrative bit that doesn’t require such precious scripting, plan to deliver that section without teleprompter. But don’t go too long that way. An academic audience usually wants some symbolic assurance that you wrote this all down very carefully in advance, and that you’re not just, you know, saying stuff (JYKSS).

3. Keep to your time. Unless you’ve got a lot of experience reading papers, and just know you can stick the landing, you should do a read-through with a stopwatch to practice your timing. And if you have to cut a big section, cut it in such a way that you don’t have to say, “I cut a big section here.” Even if you’ve written a massive study, you should respect your audience by producing a new, derivative work of art: a conference paper. It’s a parergon, a by-work, a thing you cared enough to make for this audience.

4. Q&A Is Your Friend. Leave the recommended time for questions and answers, and don’t dread it. If you’re nervous, you’ll have a tendency to think that questions are signs of failure, and you’ll attempt to fix questions by shooting them down prematurely. One temptation is to swat them all aside with “this paper only studied one tiny part of the problem; I have no idea how it applies to your question, sorry, anybody else? No, okay then.” Here’s one strategy for handling Q&A: gather up about a half dozen things you wanted to say in the paper, but didn’t. When somebody asks a question, no matter what the question is, find a way to connect it to one of those points you wanted to say anyway. I swear this works. You’ve probably seen politicians do it poorly (“Your tough question reminds me of my slick talking point which I will now robotically repeat.”), but I’ve seen great communicators like Os Guinness rock the mic this way (“That’s a great question. There are three things involved in the answer. First…”), to everybody’s benefit.

5. Use teh internets to distribute full copies. Scholarly conferences predate the web, and some of the things we do at them only make sense if you pretend it’s 1980. Handouts are great (and they allow people to swing by your session, grab a document, and sneak away to hear somebody whose work they value more than yours, just saying). But consider producing a one-page summary that includes your e-mail address. This reduces paper waste, which of course SAVES THE PLANET EARTH. And the people who e-mail you actually want to read the whole thing, unlike the drive-bys who snag your paper and then throw it away at the N.T. Wright session.

6. Try out new ideas. Let’s say you’ve got an idea that you’ve thought hard about, but you’re not ready to put it in print so it lives on your CV forever, or you’re not confident that it should be taught to normal people. Well, an ETS conference is full of not normal people. Hone that argument the best you can, and present it carefully, but let your audience know that you are saying it at a conference because you’d actually like feedback from informed hearers. Don’t you wish there were an evangelical gathering of scholars that was a safe place to get some intellectual accountability? A community that cared so deeply about the truth that they got together and tested each other’s ideas before publication? A place where we listened to each other’s arguments critically, generously, honestly, encouragingly, and with the intent to warn each other about muddles and dangers? Let’s build a community like that, one session at a time.