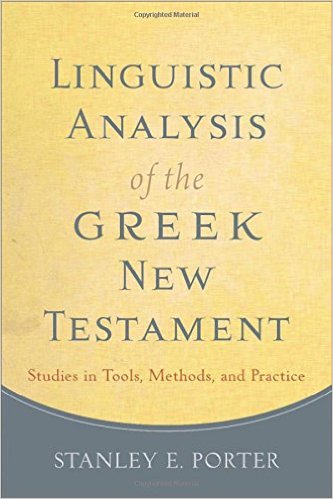 You don’t expect to find a lot of trinitarian theology in texts on linguistics –at least I don’t.

But there it is, nestled in (or nestle-alanded in, amiright) at the end of Stanley Porter’s new collection of essays, Linguistic Analysis of the Greek New Testament: Studies in Tools, Methods, and Practice (Baker Academic, 2015). Hiding there behind remarks on the Louw-Nida lexicon, sociolinguistics, discourse analysis, and heaps of verbal aspect you’ll find it: a chapter on “Hyponymy and the Trinity.”

What, you may ask, is hyponymy? Good question.

Hyponymy is a relationship between the semantic fields of two words, where the field of one is included within the field of another. Porter gives the example that “tulip,” “rose,” and “violet” are all included in “flower,” which makes the first three terms hyponyms and “flower” the superordinate term that comprehends them all.

You could call the superordinate term a hypernym, which makes a nice matching pair with hyponym, but then you have to lecture like this: “‘Army’ and ‘navy’ are hypOnyms of the hypERnym ‘military.'” And nobody wants to see the expressions you make while you’re talking that way, prof. So Porter uses the pair hyponym-superordinate. “‘Flower’ is the superordinate term with respect to its various hyponyms.”

In this chapter, Porter applies hyponymy to the question of how the New Testament uses names for God, which includes names of trinitarian persons, in order to “open up new interpretive possibilities.” He suggests “that the linguistic model of hyponymy provides a working model that can appreciate the complex and developing relationships of divine epithets employed in New Testament writings.”

Porter begins by raising the question: “are speakers aware of something for which they do not have a simple term in their vocabulary?”  He points to situations where numerous hyponymous terms are used by people who have no available superordinate term to gather them under. Possible examples of this situation include the Greek use of demiourgos to cover workers like doctors, flautists, and carpenters; in English we have all the same hyponymous terms, but somehow we get by without a good English word to group those under. German, Porter says, apparently lacks a word for “vegetable” that has the same range as our English word.

The situation in the New Testament –take Paul as an example– is a habit of naming Father, Son, and Holy Spirit sequentially and in close proximity . Since Paul uses these triads, Porter says,

it is worth considering that Paul was aware of some type of close relations (what we might even call ontological) among what are now called the three persons, though he did not have a superordinate term at his immediate disposal.

How would somebody talk if they lacked a superordinate term? They would likely select one of the hyponymous terms and press it into service as also a kind of umbrella over the other hyponyms, while still letting it do double duty as one hyponym among others. In English we do this with “duck,” which means both the species that includes (male) drakes and (female) ducks, and also the female of the species. We have to provide some context clues to clarify how we are using “duck,” but otherwise we rarely feel the tension of lacking a dedicated superordinate term.

And this is exactly what we see Paul doing when he uses the word “God” to refer sometimes to the Father of Jesus Christ, and other times as the triune God. “Theos… is used both as one of the hyponymous terms and as the superordinate term.” John also does it, most famously in John 1:1. The usage there –“the word was with God and the word was God”–

makes sense if ‘the Word was with God’ is a formulation about two hyponyms as individual members of the Trinity, while ‘the Word was God’ is a formulation that includes both a hyponym, ‘Word,’ and its superordinate term, ‘God,’ or what would later be called the Triune God, whose status (as well as label) encompasses all of its hyponyms as individual members. (p. 383)

What are the benefits of viewing this usage as an instance of hyponymy? It clears up some strange biblical usage:

It can serve as an instructive interpretive device, providing a hermeneutical framework for understanding a body of data –the biblical data– often seen as unwieldy and intractable, as an explainable whole. ..It becomes clear that most instances of New Testament usage employ the hyponymous terms, often without a superordinate term in view or mind.

And it can help us perceive trinitarian commitment in texts at a much earlier date than we may otherwise have been inclined to. Most straightforwardly, we will be more flexible about finding trinitarianism in texts that don’t use the word, because we can recognize when the writer is expressing something without using what seems to us the obvious superordinate term:

It is entirely plausible that Paul himself may well have deeply understood what is now called the Trinity, as evidenced through his conscious use of tripartite formulas that conform to the superordinate and hyponomous lexical pattern. This, then, places the concept of the Trinity early in Christian understanding, much earlier than often posited, even if there was not a specific or single term for it.