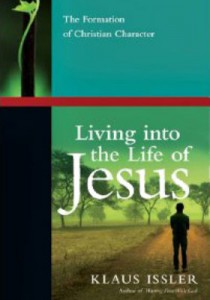 Klaus Issler‘s new book Living into the Life of Jesus: The Formation of Christian Character (IVP, 2012) is a  unique product. It looks like a spiritual formation book, and it is. From its green cover with a picture of a lone figure walking down a path into a gauzy landscape, you can tell it’s going to be in the genre of spiritual writing, with the soft touch and gentle approach that is customary for books in that field. A tender little vine winds its way up the top corner of the book. A Dallas Willard blurb floats hauntingly beside that: “A vital resource.”

And then when you flip through the book, you see key points bulleted, a big round PAUSE button that you should hit when you need to stop and reflect, discussion questions geared toward self-examination, quiet little poetic compositions by the author, and lists of practical suggestions for application. Some pages of the book look almost like a workbook, minus only the blank lines for writing out responses.

It’s axiomatic that you shouldn’t judge a book by its cover, but if the publisher has designed the book well, surely you can tell something about it from all these visual clues. This is in fact a spiritual formation book, a resource, a tool to be used by disciples for their formation.

But here’s something unique about Issler’s book. Tucked away in its logical place in the fifth chapter, Issler makes a set of claims and recommendations that come straight from a robust and deeply considered trinitarian theology. Right there in a spiritual formation book!

No Christian should be surprised to find something about the Trinity in a book about the Christian life; after all, if we want to know God and to be transformed by that knowledge, we would expect to hear some truth about our God, who is the Father, Son, and Holy Spirit. But Issler has brought in the Trinity not only as the truth of our spiritual life, but as the way to that life. And he has done so in a way that doesn’t distract us by changing the subject, but by focusing our attention more resolutely on Jesus Christ, who is of course the way, the truth, and the life.

Though he uses a light touch, Issler makes several related Trinitarian moves in chapter 5, and they really are foundational for the rest of the spiritual formation insights he gives in Living into the Life of Jesus.

The key move is that, in a book that is concerned to point us to Jesus Christ as the pattern for our sanctification, Issler argues vigorously for a deeper appreciation of the full humanity of Jesus, so that we can really view him as a role model, a hero, and someone who we can imitate. He keenly notices how often we resort to playing the God card to put Jesus out of reach as a pattern:

How could Jesus know the thoughts of others? Because he was God.

How could Jesus resist temptation and live without sin? Because he was God.

How could Jesus forgive his enemies while being tortured on the cross? Because he was God.

Et cetera. The problem Issler sees is that this is sort of a Superman version of Christology: We can’t really consider imitating Clark Kent if Clark Kent is really solving all his problems by being Superman.

Instead, Issler argues that “Jesus predominantly relied on the divine resources of the Father and the Holy Spirit to accomplish his messianic mission.” (p. 110) That is, Jesus’ life of obedience, righteousness, teaching, and even working miracles, was not primarily a matter of him flexing his deity muscles, but was predominantly a matter of him living a human life that was in obedience to his eternal Father, and empowered by the eternal Spirit.

Just laying out the options is helpful. But Issler argues through them, eliminating some and complicating others, until option D is the best one left.

And why?  “Such dependence by Jesus would be then the norm of his life on earth.  This option permits sufficient human experience for Jesus qualify as a sympathetic high priest and a genuinely human sinless sacrifice.” The evidence that Issler sifts in making his case is not just an attempt to win a disputed point. Remember that this book is primarily a spiritual formation tool. Issler’s evidence requires him to do a rich study of the interaction of Jesus with the Father and the Holy Spirit. And that study is what puts the reader within reach of the great, triune work of grace that is the life of Jesus.

In this section, Issler takes the reader into an analysis of the network of divine relationships that is the life of God, the life that the Son lived with the Father and the Spirit for our salvation. It encourages us to be Christ centered without being Father-forgetful or Spirit- ignoring. And throughout, the whole movement is one of grace. Most books about imitating Jesus as a role model break down into some kind of performance-based legalism. In contrast, evangelical books about Jesus often so emphasize the grace of his death for us that they shun any notion of imitation. But Issler has some new tricks here, and for some people, I think this book will point them beyond the impasse. Evangelicals can confess Jesus as savior without having to neglect Jesus as pattern.

You remember those bracelets that asked WWJD, What Would Jesus Do? They were asking the right question. But even more important, as Issler’s project reminds us, is to answer with the right answer: Jesus would do the will of the Father, in the power of the Spirit, for us and our salvation.