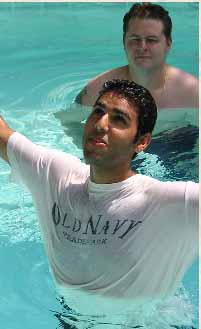 Before he gives his testimony of conversion to Christ, Nabeel Qureshi makes it clear that he was perfectly satisfied with Islam as he experienced it. He tells about his upbringing in a devout, peaceful, and intellectual Muslim family, where he was a role model for other Muslim children because he had read the Qur’an in Arabic by age 5.

Islam was not just my religion, it was the whole structure of my life. Born into and raised in Islam, it was my heart’s blood. Laying the foundation for how a youth should live, Islam was the framework and the blueprint of my life. Edified by apologetics, I challenged its opponents and called everyone else to it. It was here, standing atop the minaret of Islamic life, that Christ called out to me.

Eventually his interest in Muslim apologetics would lead him to follow the evidence where he saw it leading him, into accepting Christianity and rejecting Islam. His writing shows how passionate he is about the persuasive power which Christianity has. He is obviously edified by studying the evidence for the core Christian claims, and since his conversion has continued to dig deeper into the deep things of Christian doctrine.

What started him on the road to conversion? What was the first thing that put Christianity on his radar as a serious faith worth investigating at all? He caught somebody reading the Bible. He met David Wood and caught him in the act:

Although he was a Christian and I a Muslim, we quickly became close companions due to our common set of morals. One evening I found him reading the Bible. This was very surprising. As a Muslim, I had read the Qur’an every day for most of my life, but I had never seen a Christian seriously reading a Bible in his free time. My interest piqued by this chance encounter, I decided to see how much he really knew about the Bible. … Unbeknownst to me, David was not just a Bible-reading Christian, but a Christian with every intention of becoming a devoted apologist.

“I had never seen a Christian seriously reading a Bible in his free time.” Small wonder that Christianity didn’t even seem like a remotely plausible religion to this devout reader of the Qur’an. Once Nabeel started asking his new friend some hard questions, he discovered that this “Bible-reading Christian” and “devoted apologist” had answers, and counter-questions, and more answers and more questions, and a real case to present (read some of it here).

David and Nabeel are now partners in an apologetics ministry, Anastasis Apologetics, named for the resurrection of Jesus which is the cornerstone of the case they argue for their faith. This Saturday August 5 they’ll be debating two Muslim apologists on the subjects “Jesus: Mortal Prophet or Divine Son of God?” and “God: Trinity or Tawheed?” If you’re in the Norfolk, VA area, check it out.

And try to get caught reading your Bible seriously, outside of church. Not so you can feel proud about doing your religious duty in public, but so that somebody might imagine that Christianity is the kind of respectable religion whose members read its holy book. If you’re looking into the Bible, it gives the impression that the Bible’s a book that might be worth looking into.