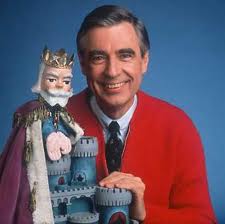 Today is the birthday of Fred Rogers (March 20, 1928-2003), whose first name was not Mister, but whose middle name actually was McFeely, and who actually wrote the line, “It’s a neighborly day in this beauty wood.”

Mister Rogers cranked out that sweater-wearing, sneakers-changing, trolley-riding show of his for 33 years. It was so slow-paced, so gentle, and so affirming that it just boggles the mind. Rogers was ordained in the Presbyterian Church (PCUSA), having worked his way through seminary during eight years of sneaking a few classes into his lunch hours. He never pastored a church, but was specifically charged to keep doing all the good he could in children’s television programs.

I think it’s fair to call the show bland, without intending it as an insult. It was soft, unstimulating, moderate, smooth, free of any jarring elements, and e v e r. s o. s l o o o o w. It didn’t so much entertain as soothe and reassure. In fact, Rogers sometimes seemed to go out of his way to keep from entertaining his audience: This is clear right from the famous opening scene where he enters a room, turns his back on the audience (!) and changes into something softer. He wasn’t afraid to sit down in the floor and play with a Tonka truck, showing viewers how the levers worked. And these other levers. And this one over here. And how about this one? Let’s try that one again.

Mister Rogers the Presbyterian minister on Public television had a very clear idea of what he wanted to accomplish. He wanted to act out a friendly neighborhood where a responsible adult accepted everybody, had lots of friends, and made time to talk with kids. His show rode a big cultural wave of affirmation and self-esteem programming that has now swamped most of the shows aimed at kids. Based on his published interviews and habitual phraseology when talking about theological topics, Fred Rogers seemed to be comfortable with a soft, liberal version of mainline Protestant religion. That message happened to fit his medium pretty well: you can hardly get the rough edges and the hard ideas of Christian theology into a daily kid’s show on public TV. It was actually a perfect match: mainline preaching usually boils down to “you are accepted” and “all is forgiven,” which is something that can be communicated successfully in that laid-back, friendly, winning way that Mister Rogers had. It’s not the word of truth. But it was decades of gentle programming by a man whose broadcast persona was so bland that he may paradoxically prove to be unforgettable in the long run.