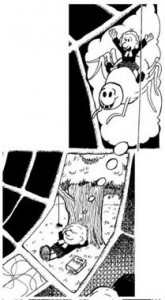 Jonathan Edwards (1703-1758) is widely recognized as the greatest theologian America has yet produced. He wrote epochal books and preached sermons that still echo in our cultural memory from the Great Awakening. One of the least important things he ever wrote is a fun bit of juvenilia known as “The Spider Letter,” a descriptive essay about spiders which can be seen soaring through the air. Recent scholarship has established the date of this letter as 1723, when Edwards was 20. But for generations, readers believed Edwards’ biographer (and great-grandson) Sereno Dwight who reported that the letter had been written when Edwards was only 12! The image of a pre-teen Jonathan Edwards roving the woods of colonial New England solving The Mystery of the Flying Spider, like some kind of Puritan Encyclopedia Brown, struck me right in the funny bone. So a long time ago I did a cartoon adaptation of the Spider Letter, which I now present for your amusement and edification. This version is edited down, but you can read the full text here.