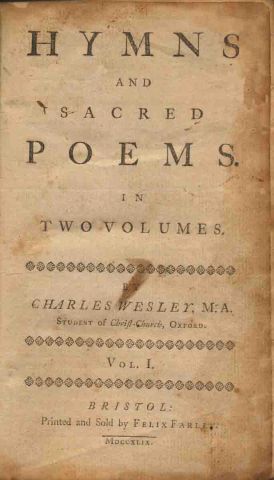 The hymns of Charles Wesley are incredibly good. He wrote thousands of them, in a variety of styles and a vast range of topics. Lord Bernard Manning (1892-1941), a historian of religion, once wrote an appreciation of Wesley’s work in words which it would be difficult to improve on. The text of Manning’s little book is online at CCEL. Along with humorous reminiscences of his childhood church-going (you know the kind: “What would happen if I put both of my hands on the bald head of the man in front of me?”), he does a great job of assessing the value of those Wesley hymns, their place in English literature, and their place in the history of the church.

Here are a couple of the best passages:

It was Charles Wesley’s good fortune, or (if you like) it was in the providence of God, that he was set to express the Catholic faith as it was being newly received in the Evangelical movement at a moment when prevailing taste and prevailing literary habits combined to give him a perfect literary instrument for hymnâ€“writing.

Before we look at the hymns themselves, then, I want to emphasize to you the unique possession of your Church in this book which you hardly know today. You talk much, and you talk rightly, of the work Methodism does for the world and for the universal Church; but your greatest â€” incomparably your greatest â€” contribution to the common heritage of Christendom is in Wesley’s hymns. All the other things which you do, others have done and can do as well, better, or less well. But in Wesley’s hymns you have something unique, no one else could have done it, and unless you preserve it for the use of all the faithful, till that day when we are all one, we shall all lose some of the best gifts of God. I implore you then, in these days when you are tempted to look at other parts of the Church and to dwell on your likeness to them and on the great things that we all have in common, keep that good thing committed peculiarly to your charge. This is your vineyard: do not come one day saying, â€˜Whatever I have done elsewhere, mine own vineyard have I not keptâ€™. In Wesley’s hymns, not divorced from the great tunes of the Handel tradition, you have what only you understand and what (I sometimes fear) you no longer think it worth while to understand.

You may think my language about the hymns extravagant: therefore I repeat it in stronger terms. This little book â€” some 750 hymns {Wesley’s Collection of 1780 has only 525 hymns.} â€” ranks in Christian literature with the Psalms, the Book of Common Prayer, the Canon of the Mass. In its own way, it is perfect, unapproachable, elemental in its perfection. You cannot alter it except to mar it; â€” it is a work of supreme devotional art by a religious genius. You may compare it with Leonardo’s â€˜Last Supperâ€™ or King’s Chapel; and, as Blackstone said of the English Constitution, the proper attitude to take to it is this: we must venerate where we are not able presently to comprehend.

And finally, a true insight into the qualities which Wesley’s hymns combine in an almost miraculous manner:

These three qualities, among others, give such a life to the hymns that they can never grow old while Christians experience God’s grace.