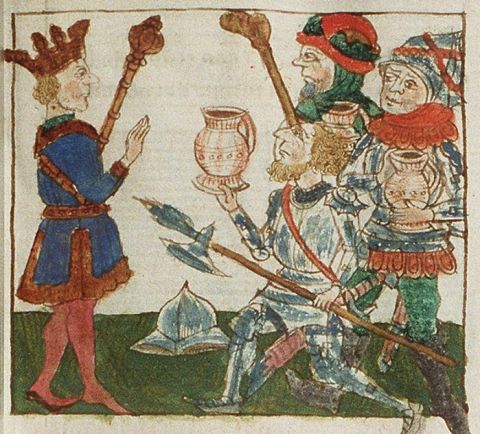 I figure King David was an ENFP. If David had taken the Myers-Briggs personality type indicator, he would have scored as an extrovert who thrives on contact with others, an intuitive person who sees meanings in everything, a heart-person who makes decisions based on feelings, and the kind of person who doesn’t have to resolve everything right away.

I could be wrong about some of that, but it is clear that David had a strong and particular personality. Consider the story about his three mighty men (II Samuel 23):

13 And three of the thirty chief men went down and came about harvest time to David at the cave of Adullam, when a band of Philistines was encamped in the Valley of Rephaim. 14 David was then in the stronghold, and the garrison of the Philistines was then at Bethlehem. 15 And David said longingly, “Oh, that someone would give me water to drink from the well of Bethlehem that is by the gate!” 16 Then the three mighty men broke through the camp of the Philistines and drew water out of the well of Bethlehem that was by the gate and carried and brought it to David. But he would not drink of it. He poured it out to the Lord 17 and said, “Far be it from me, O Lord, that I should do this. Shall I drink the blood of the men who went at the risk of their lives?” Therefore he would not drink it. These things the three mighty men did.

He poured it out, on the ground, to the Lord. That is a symbolic action that you either understand instantly, or you just don’t get. We’re not told whether the three mighty men “got it” or not. The whole story illustrates their incredible loyalty to David, so they probably weren’t upset at the wasteful, symbolic use he made of the water they’d worked so hard for. It’s easy to imagine them being interviewed by the news crew: “What was going through your mind when King David poured out that water?” “Well, ma’am, we were there to do a job, and we did the job. It doesn’t matter to us what the commander does with the water; he said he wanted it, so we went in and got it. We had a job to do, and we did the job.”

They were obviously men of action, and probably not deep thinkers or poets. David, of course, didn’t actually mean he wanted that water. What he really meant was that he wished Bethlehem were not under Philistine control. But, being the type of guy he was –again, I’m guessing ENFP– he didn’t just say, “I wish Bethlehem weren’t under Philistine control.” No, he said it poetically, laced with associative meaning: “Oh, that someone would give me water to drink from the well of Bethlehem that is by the gate!” Can you blame the mighty men –I’m guessing ISTJs– for taking him at his word? And could David have expressed himself any differently than in this poetic, emotional, allusive, indirect way? He was being himself when he spoke like that.

Reading the Bible through the grid of personality types can be a trifle silly, and I don’t recommend it as an end in itself or as the basis of any solid conclusions. That way lies unbridled speculation — HEY I HEARD KING DAVID HAS THE SAME PERSONALITY TYPE AS BARACK OBAMA!!!

But getting a clear picture of the particular personality of David can be a big help in reading the parts of the Old Testament that are connected to David: all the messianic threads of the OT, for example. Pondering David’s personality is especially helpful for cluing in on the characteristic patterns of the Psalms. Wherever David speaks prophetically, I find it arresting that he speaks the words of God in a voice distinctively Davidic, colored by all his own human personality. Evangelical theories of Biblical inspiration have almost always recognized that divine inspiration does not obliterate the personal and cultural traits of the human authors of Scripture, but it’s intriguing to see it in action in those passages which are so clearly the word of God and so clearly the voice of David. David, the ENFP.