In January, I had the privilege of taking twenty Torrey Honors Institute students to Rome, Italy for two weeks. Not only was I impressed by these studentsâ€™ attention, interest and appreciation for great art and architecture, but I was also impressed by their appreciation for an opportunity to travel and learn. Though there were many highlights to this trip, one of the aspects that I liked the most was a side trip that my wife and I, along with two students, took to the Benedictine monastery in Subiaco.

The current monastery is the result of 1500 years of Christian presence, begun when Benedict of Nursia retreated to a cave on the mountainside to live the life of a monastic hermit about the year 500. Though Benedict himself lived here on and off again for the next twenty-five or so years, monks have remained on this site through the centuries and the 13th-15th centuries frescoes are beyond compare and are worth viewing in person whether one has an interest in monasticism or not. One element in particular about the monastery caught my attention.

On the way down a set of steps toward the Madonna Chapel and, ultimately, to a chapel that is used for the funeral of monks and their original crypt, are two frescoes on either side of the steps. 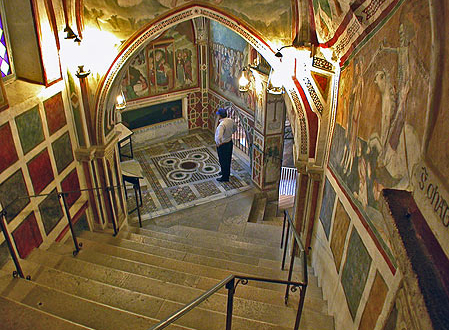 On the right is a fresco picturing Death on a horse. The horse appears to either be riding over a group of individuals who have already died or, in fact, is killing them by riding over them. Regardless, oneâ€™s focus is drawn to Deathâ€™s sword, striking down two noblemen having a conversation. The message is clear: death will find you. 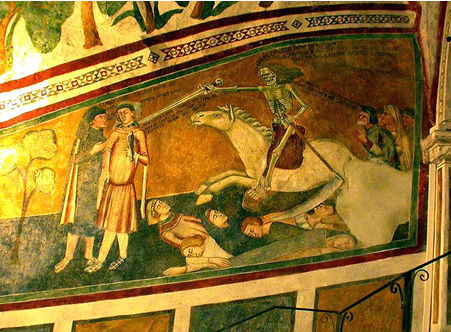 The image on your left as you descend the steps is also a reminder that regardless of you station in life, you will die and, in time, decompose. In this picture, a man (likely a monk) is speaking towards three people of the nobility. Though two are more interested in talking to one another, one is listening to the monk. Before the monk is an image of a deceased nobleman in three different stages of death: â€œfreshlyâ€ dead, beginning stages of decomposition and, finally, skeletal. The fact that two of the three listeners are paying no attention to the preacher indicate that they likely think that they are above death, or at least that death will not visit them soon. The message, however, in this painting is similar to that across that stairs: everyone dies and, in this image, everyone rots. Therefore, lay aside your worldly pleasures (notice the birds) and live a holy life (perhaps even becoming a Benedictine monk at Subiaco!). 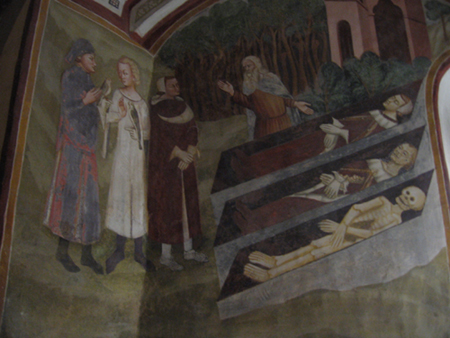 Remembering that these pictures adorn the walls on the stairs that lead to the chapel where monastic burials occurred as well as the crypt, that is, where the monks were buried, the paintings are speaking clearly to the monks: death is inevitable so be prepared to die. Ancient philosophers often understood life as a preparation for death. The Stoic philosopher Epictetus in his Manual writes, â€œWhen you see anyone weeping in grief because his son has gone abroad, or is dead, or because he has suffered in his affairs, be careful that the appearance may not misdirect you. Instead, distinguish within your own mind, and be prepared to say, â€˜Itâ€™s not the accident that distresses this person, because it doesnâ€™t distress another person; it is the judgment which he makes about it.â€™ As far as words go, however, donâ€™t reduce yourself to his level, and certainly do not moan with him. Do not moan inwardly either.â€ For Epictetus, death happens and one should respond appropriately, which is not to moan inwardly or outwardly, for people die and this should not surprise us. It appears that the message along the walls of Subiaco want to say something similar, live you monastic life well since you will die. Or as one singer recently said, â€œLive like you were dying.â€

This past weekend we remembered the death (and resurrection) of the Savior, Jesus Christ. Based on Jesusâ€™ prayer in the Garden of Gethsemane on the night he was betrayed, it would appear that Jesus would have taken a pass on death had his heavenly Father decided that this was possible: â€œAnd he went a little farther, and fell on his face, and prayed, saying, O my Father, if it be possible, let this cup pass from me: nevertheless not as I will, but as you willâ€ (Matt. 26:39). Yet, other passages from the Gospels make it clear that Jesus knew that he would die: â€œAnd they were in the way going up to Jerusalem; and Jesus went before them: and they were amazed; and as they followed, they were afraid. And he took again the twelve, and began to tell them what things should happen unto him, saying, ‘Behold, we go up to Jerusalem; and the Son of man shall be delivered unto the chief priests, and unto the scribes; and they shall condemn him to death, and shall deliver him to the Gentiles: And they shall mock him, and shall scourge him, and shall spit upon him, and shall kill him’â€ (Mark 10:32-34a). Jesus knew that he would die yet he continued to live his life as he always had, by healing, teaching and loving humankind. In a sense, knowing that his death was imminent, Jesus lived life to the fullest, in a way that only God incarnate could do. The lesson for us? Like the frescoes as Subiaco â€œsay,â€ we too will die so we should live in light of this truth. For Christians, this means living a holy, devout and God-fearing life. Just as Jesus was resurrected and now lives, so shall we live. Think upon your death, O Christian, and live a holy life.