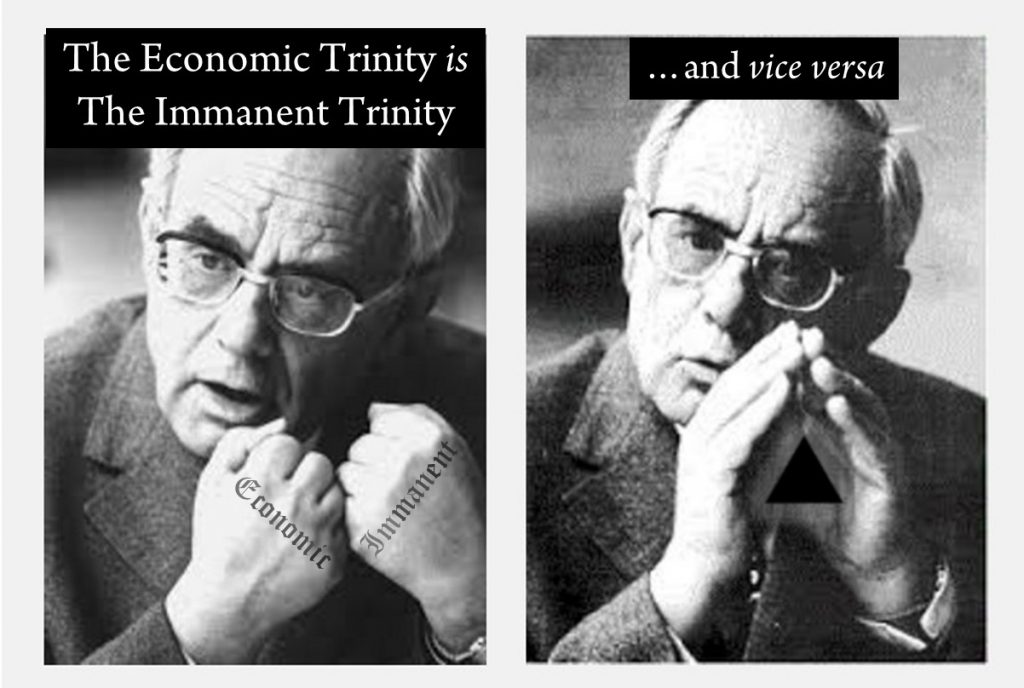 Once upon a time, Karl Rahner wrote a phrase that launched a thousand theological ships: “The economic Trinity is the immanent Trinity and vice versa.” Those ten words (nine in German, where “vice versa” is just “umgekehrt”) provoked thousands of pages of discussion in the great rush of publishing which was the twentieth-century revival of interest in Trinitarianism by academic theologians.

I even added my own two cents to the discussion in my first book back in 2004 (though it’ll cost you considerably more than two cents to read it, I’m afraid), which was sub-titled Rahner’s Rule and the Theological Interpretation of Scripture. In that project, I surveyed what all the major interpreters had said about this phrase, which he called his Grundaxiom, but which many have since called Rahner’s Rule. My idea was that you could pretty much sort the most ambitious projects in recent Trinitarian theology by how they interpreted Rahner’s Rule. After all that review of the literature, I also attempted to put the very modern discussion of Rahner’s Rule into a larger context of the history of reading the Bible Trinitarianly. Did this claim, that the economic Trinity simply is, reversibly, the immanent Trinity, help us as modern theologians to join in with the entire history of construing Scripture as the vehicle of true knowledge of God the Trinity?

That question, I still think, is the right question to ask. So, does Rahner’s Rule help us read the Bible for the Trinity?

The typical answer in most theology books, I think, has been yes. The story goes like this: We learn of the Trinity from Jesus Christ, who speaks about the Father who sent him and the Spirit they send. This is the economic Trinity, the Trinity of the history of salvation (oikonomia/economy). But when we ask about God’s own eternal life without reference to the sending of the Son and the Spirit, we are talking about the immanent Trinity, and much traditional theology constructed its notion of that immanent Trinity on some sort of speculative basis. Rahner said what he said as part of an argument to put back together what he thought had come apart in the course of theological history. That eternal Trinity which simply is the immanent being of God, and that temporal Trinity which simply is Jesus and his Father and their Spirit, asked Rahner? Same Trinity.

This identification provided a lot of the impetus for the modern Trinitarian revival, which prided itself on being more historical than traditional Trinitarianism, and therefore more Biblical. If the historical construal is accurate (things fell apart), then the proposed solution (put them back together by identifying them as the same thing) must be beneficial, right? Surely it would equip modern theologians to read the Bible and find the Trinity itself in action there, since the Trinity in action there just is the Trinity immanent to God’s own being.

But problems came up along the way. No doubt Rahner’s Rule helped a certain generation of academic theologians to re-center their theology on the course of salvation history. But the more it did so, the more it tended to collapse God’s very identity into the course of events in world history. Furthermore, during the decades when Rahner’s Rule was most influential, there was a remarkable shift of attention away from the doctrine of God’s own unity, and toward this new doctrine of the unity of the Trinity with the economy. Bruce Marshall puts this point more sharply, noting that theologians are so preoccupied with the economic-immanent unity that they simply don’t write treatises on the unity of the one God at all anymore (“The Unity of the Triune God: Reviving an Ancient Question,”  The Thomist 74 (2010): 1-32). And finally, the more a theologian invests in the economic-immanent conceptuality, the less there is to say about the eternal processions in God and how they are extended to us in the missions of the Son and the Spirit. Some recent theologians (I’m thinking especially of Gilles Emery) have done good work showing that the new language (economic and immanent) can in fact be used to say some of the same things as the ancient tradition (missions and processions). Even so, the economic-immanent schema all but displaced the missions-processions schema in modern theology. That is a great loss, especially since “economic Trinity and immanent Trinity” is such a jargony mouthful to spray at theology students, whereas anyone using the old missions-processions language was constantly finding themselves saying Johannine and Pauline things, practically in the very words of Scripture (duly acknowledging that some metaphysical specificities had been layered onto the schema).

This is where the story takes an intriguing turn, in my opinion. “I do not know exactly when and by whom this theological axiom was formulated for the first time,” Rahner once remarked. But I think we’ve since chased it down to a fairly likely source: an eighteenth-century theologian named Johann August Urlsperger (1728 – 1806) was the first to begin talking in these terms, distinguishing between a Trinity of being and a Trinity of revelation. Urlsperger was a complex and strange figure, but for our purposes the bottom line is that he made a distinction between the three in eternity (which he believed in) and the three in the economy (which he also believed in). But he didn’t think they were two separate Trinities (dreadful word, that). He believed that God was eternally three, but that the threeness in God was of a different character from the threeness in salvation history. Up there, God is three in an absolutely equal and equilateral manner; but down here, the three decided who would stand in a relation of sending to whom, so that the three took on all those generating, spirating, and sending relationships we hear about in Scripture.

It’s a strange set of ideas, and probably nobody but Urlsperger ever believed anything quite this convoluted about the Trinity. And since at this distance, almost nobody has so much as heard of Urlsperger, why would I bring him up at all?

The reason is this: the economic-immanent conceptuality was invented precisely to block the idea that missions reveal processions. Urlsperger did not want to say what the tradition said about the Father’s sending of the Son revealing that there was an eternal relation of generation in the being of God. He invented the two-level Trinity schema in order to keep all generative language downstairs but still keep a robust threeness upstairs. The economic-immanent schema was a containment strategy for keeping relations of origin out of the Godhead.

When Rahner later came along and used that same terminology to insist instead on the unity of the two levels, he did not simply restore Trinitarianism to the state it had been in before the Urlspergerian split. Instead, he opened up a new path in theology that was free to go its way without taking its bearings from the missions-processions schema. One way of reading the modern revival of Trinitarianism in academic theology is that it is a tangential development that makes contact with the central tradition of the doctrine of the Trinity at one point, glancing off of it and headed in its own direction.

In my opinion, the participants in the modern revival hit on lots of true and helpful observations, and contributed much to the church’s legacy of Trinitarian thought. But it now seems to me that they did so in a rather ad hoc and sometimes accidental way, just because of the richness of the subject matter and the investigative energy they brought to it. And they gained insight into the Trinity in spite of Rahner’s Rule rather than because of it.

Having spent a lot of time and thought on Rahner’s Rule, I am currently viewing it as merely a phase of modern Trinitarianism, and am increasingly hopeful about theological life after its terms and presuppositions are set aside. The habitual ways of talking that it has introduced into modern Trinitarian theology have a distorting and distracting effect on the doctrine, and I am eager to propagate other, more adequate ways of thinking about, speaking about, and teaching, the doctrine of the Trinity.

My apologies if this conclusion sounds flip, glib, or dismissive. I know that assertions like these need to be backed up with some more extended analysis, tested by critical disagreement, and tied down with footnotes. To see all of that (and now, apologies if this conclusion sounds like an ad), check out chapter 5 of my forthcoming book (available now for pre-order), The Triune God.