The artist known as Phoebe Age Nine submits an anatomical study. Or does she?

A skeletal study is a foundational beginner’s exercise in many life drawing courses, but an artist as original and accomplished as PA9 is not likely to publish a simple exercise in representation. What’s going on in this drawing is not really the depicting of bone structure. What’s really on display is linework itself. PA9 is investigating line.

“There is at the basis of every picture,” wrote Harold Speed (1872-1957), “a structure of lines and masses. They may not be very obvious, and may be hidden under the most broken of techniques, but they will always be found underlying the planning of any painting.”

What PA9 is doing here is showing nothing but the structure of lines. Sure, at the top of the image, the iconic skull grabs the viewer’s eye, making a strong and direct statement of representation: “This is a skull.” But follow the image down the spine, and see what happens to the vertebrae. Just below the rib cage, each vertebra is exquisitely constructed by the negative space between the two lines. The line running down the left side jogs out a bit, and precisely opposite it, the line running up the right side jogs out in symmetrical correspondence. But at the fourth vertebra beneath the rib cage, the symmetry is frustrated. First it is simply flouted: a right vertebral bulge is met by no corresponding bulge on the left. 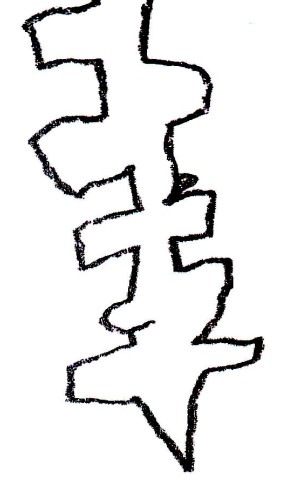 And once the rule has been broken, the lines beneath are liberated to do anything they want, and what they want to do has little to do with looking like a lumbar, a coccyx, or a sacrum. Instead of an anatomical study, we have a perfect fantasia of linearity: rectilinear right angles pivot and jag into swooping curvilinear arcs; one bit of line stops and starts sketchily, while another scumbles along and then doubles around on itself to conjure a bit of black space. All of this, of course, balances on a very satisfying v-shaped terminus.

Not spine, but line. That bounded shape running down the center of the composition is a masterpiece of pure line. It’s a skeleton, all right, but not the skeleton of the human body. It is the skeletal structure of art itself.

Speed, in his discussion of the rhythm of line, wrote, “There are particular emotional qualities analogous to music that affect us in lines and line arrangements…and any power a picture may have to move us will be largely due to the rhythmic significance of the original planning.” He goes on to point out the abstractness of the effects: “These qualities…affect us quite apart from any association they may have with natural things: arrangements of mere geometrical lines are sufficient to suggest them. But of course other associations connected with the objects represented will largely augment the impression, when the line and tone arrangements and the sentiment of the object are in sympathy.” PA9 has associated the rhythmic significance of her pure, abstract lines with the object of a human skeleton. The two are, in fact, quite in sympathy. Spine and line are both associated with an understanding of the fundamental basis of structure.

The ribs, then, are revealed for what they really are: parentheses, emanating out to frame the great central line. And finally we can revisit the iconic skull, no longer a face but a bravura display of diversity of mark-making. Black circles, a blobby smudge, and a “mouth” made of four vertical chop-lines (no two alike) crossed by a horizontal slash and bounded by a rectangle of such exuberance that it repays closer study than we can put into words: 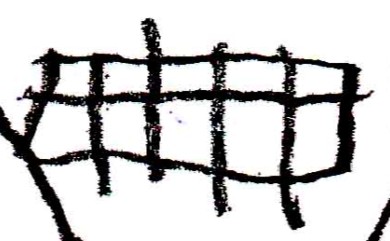 And at the top of the skull, PA9 provides the great clue that she knows what she is about. Having traced an undulating line around the face, she serenely declines to close the form with any tidiness. She lets the tip of the line fly on beyond its rendezvous point to dangle in the void.

Obey the command of the ribs: Look at the line.