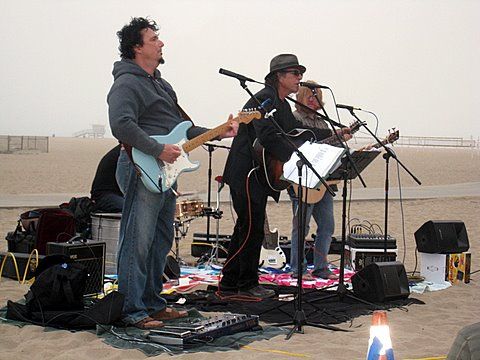 My favorite band, The Lost Dogs, just finished up a Route 66 road trip with a beach party concert in Santa Monica. It may not quite count as The American Dream, but winding from Chicago to L.A. on what is now the nostalgic back road of the nation is pretty cool. The Lost Dogs did it right: they loaded the whole band in a modest-sized motor-home and took their time, making plenty of stops and filming their escapades for an upcoming documentary.

The grand finale was the Saturday night concert on the beach about a mile from the Santa Monica Pier. The Dogs didn’t play any new music from the road trip, but with a catalog of nearly two decades to draw from, they had ample material for a good show. Even for the loyal fans who know all the lyrics by heart, though, it was surprising how many of their old songs take on new meanings when they’re performed at the Western extreme of Route 66. It turns out Terry Taylor, the main lyricist, has been writing like a traveler through Americana for all these years after all. Line after line of the Dogs’ repertoire is revealed to be a celebration of the little stories of ordinary people on a journey through great things. The Lost Dogs are a band that just keep making great, rootsy music year after year, with a high standard of craftsmanship, a deep sense of vocation, and an instinct for fun.

Bullet Train: A muscular, bluesy lament on gun violence in America’s political and personal history. By this second number, anybody who didn’t know that Mike Roe is a certified guitar genius has been given ample evidence. “There’s a lot of poor souls on the bullet train, but Lord knows they got more room”

If You Want To: One of Terry Taylor’s signature songs, it traces the contours of freewill and desire with deceptively simple lines and the occasional poetic twist: “We’re gazing from a distance at our own resurrection.” Sweet-voiced Derri Daugherty sends this song over the top: I don’t know what key Mercy sings in, but its voice must be very like this.

Devil’s Elbow: A rollicking, playful number that makes a pretty unremarkable small town sound like something from a tall tale. “The only escape is in known’ this truth: You’re lost in Devil’s Elbow”

Glory Road: This song has been around awhile, but now it’s transfigured by Mike Roe’s guitar antics and a completely re-imagined vocal delivery. A hymn on Route 66 as a metaphor for life, it’s pretty much the theme song for the road trip. “We’ve explored the patchwork of Americana / The curios and the burger plates / We got a blessing from the Queen of the Highway, / Paid attention to a sign that said “Jesus Saves”

Tumblin’ Tumbleweeds/Cool Water: A medley of two tunes covered from the Sons of the Pioneers. Nice to see percussionist Steve Hindalong leave his drumkit and come to the mic to deliver the haunting “water” line.

Route 66: Another cover, a rocking version of this standard.

I Guess It All Depends: Another song about freedom that nicely shows off the band’s expressive range, from funny to poignant and soft to loud. “Some say death is a doornail / some say death is a door /and that itâ€™s all just beginning / when the fat lady sings / I suppose it all depends / how you look at these things.”

Get Me Ready: A straight-ahead rocker that uses insider religious language in startling ways, but succeeds in stirring us up to prepare for whatever God brings to us: “Get me ready for the signs and wonders / For the absence and the silence”

Broken Like Brooklyn: One of the best pieces of Terry Taylor song-writing to date, “Broken” looks from New York to Los Angeles, drops cultural references at a rate of two per line, and yet somehow speaks a universal language of yearning. “So together we packed up the Airstream / with Pepsis, Pall Malls and Moon Pies / and we lassoed the San Joaquin River, / kicked back, went along for the ride.”

No Room for Us: Dedicated to the late Gene Eugene, a much-missed founding member of the band, this eerie little piece seems to have as much silence as sound in its cavernous atmosphere. Steve Hindalong pulls out all manner of odd percussive tricks along the way. “Christ comes / Fill the empty places / To breathe / We must find the spaces.”

That’s Where Jesus Is: An anthemic romp that was written a few years ago but sounds perfectly up to date with its declarations about “yer big debate,” Wall street, bombing, and tree-hugging. “Thatâ€™s Jesus with the drunks and in the lonely places / The rest homes and prison cells / Thatâ€™s where Jesus is: Where we ought to be.”

Eleanor, It’s Raining Now: “Long time ago / The form of God was knocking / At our door…” This uncanny, Buechner-influenced re-imagining of the fall of man is also a platform for a scorching electric guitar solo, and Mike Roe was obviously warming up for it a couple of verses into the song.

But as the song built up to its full volume, the fuses on the mobile home blew, the amps shut down, and the electrical show ended abruptly.

Unflappable showmen all, the Lost Dogs reconfigured within about one minute around an acoustic guitar and ended the concert with a cover of Bob Dylan’s Knockin’ on Heaven’s Door. Well, actually, they ended with the longest, most deranged version of Kum Ba Ya that I’ve ever heard, but that really was one of those things you had to have been there for. Unless it makes it to the DVD documentary about this great musical event, the journey of the Lost Dogs along Route 66 in the Fall of 2008. 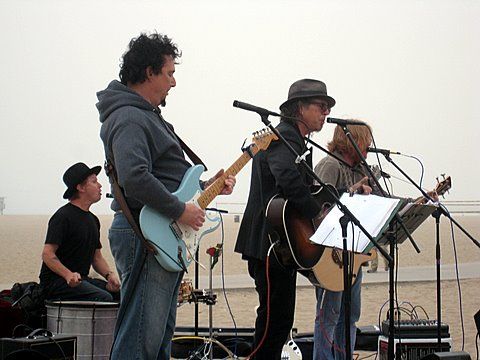 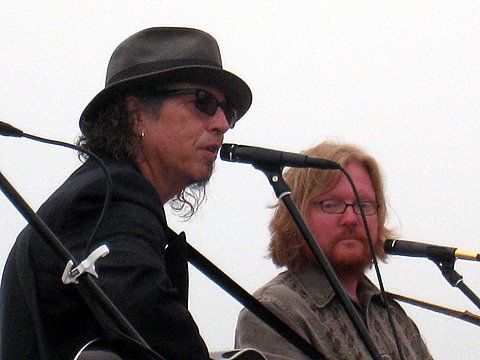 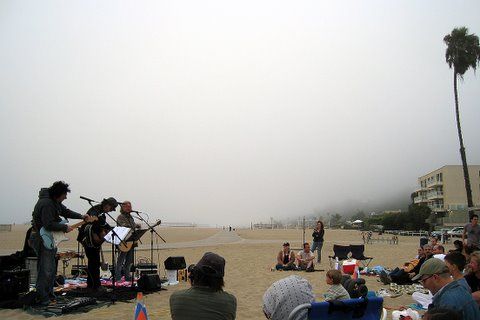