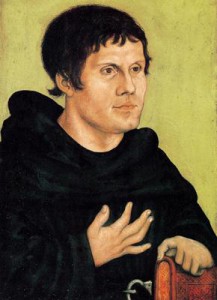 Today (April 26) in 1518, Martin Luther engaged in a public debate now famous as the Heidelberg Disputation. The occasion was the General Chapter meeting of the Augustinian monastic order in Germany. It would have been just another meeting, but in late 1517, Luther had posted the 95 Theses for debate. The general meeting in 1518 was the first opportunity for Dr. Luther to explain his views to his brother monks. So the event is famous because of its place in Luther’s early career as a reformer, right between the 95 Theses of 1517 and the Leipzig Debate of 1519 with Johannes Eck.

Luther’s text, the Theses for the Heidelberg Disputation, however, is justly famous not just as a glimpse into the past, but as a classic theological statement.  Of course it profits from being read in context. But it also jumps out and grabs the reader with remarkable directness.

Here we have Luther at his everything-you-know-is-wrong best, churning out mind-blowing, attention-getting, system-disrupting claims fast enough to make G.K. Chesterton say “now hold on, let’s take it easy with the paradoxes, buddy.” The law of God is the most salutary doctrine of life, but it hinders us from righteousness. The works of righteous men are mortal sins, unless they are feared to be mortal sins, in which case they are righteous. In God’s sight, sins are only venial when they are feared to be mortal. Someone who studies the invisible things of God through God’s works in the world does not deserve to be called a theologian. The love of God does not find, but creates, that which is pleasing to it.  Desire is not cured by satisfying it, but by extinguishing it. Aristotle is stupid, Plato was better.

The theses themselves, read one after another, seem like a series of bombs. In his explanations of the theses, Luther clarifies, connects, and explains quite a bit. His paradoxical way of talking is not just a verbal tic or a contrarian posture. He was out to clear some ground and establish a new way of thinking that would make it possible to hear the word of God anew. As Karl Barth observed about Luther, “he would clearly have liked to say everything much more simply, but with great embarrassment he constantly ventured paradoxes.” The Heidelberg Disputation is the best place to see him at work.