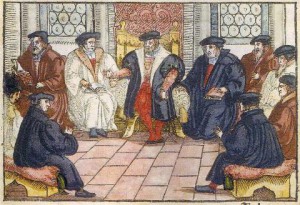 Today (October 1) was the first day of the Marburg Colloquy, a 1529 conference that attempted to bring together two streams of the brand-new Protestant movement. On one side were the Germans, led by Luther and his right-hand man Melanchthon, and on the other side were the Swiss, led by Zwingli and supported by others like Oecolampadius.

The need for unity was as much political as it was theological: the Reformation was on shaky legal ground, as far as international law went, and Emperor Charles V was showing signs that he was ready to use military force to unify the church. Indeed, the Swiss were about to be involved in a civil war, and Zwingli himself would die on the battlefield a couple of years later. So even though Luther and Zwingli had been carrying on an argument with each other for some time, they agreed to get together and see if they could unite the two movements to form a single Protestant front.

Politically, Marburg may have been foredoomed. The German Protestants, even if they had come to a complete meeting of the minds with the Swiss, were never going to come to their aid in the military way the Swiss must have been hoping for. The two sides were developing very different notions of church and state: Zwingli died with a sword in his hand, which would be all but unthinkable for Luther.

But theologically, Marburg came very close to unity. The colloquists brought 15 points to discuss, and reached agreement on 14 of them: From the Trinity to original sin, from justification to sanctification, they agreed. It was that fifteenth point that shut things down: the Lord’s supper. This was no surprise, since Luther and Zwingli had been publishing attacks against each other’s views of the Supper in the years leading up to the Colloquy.

For Zwingli, the Lord’s Supper was a public symbol, representing the death of Christ and our participation in that death. Christ is present when we take communion, not in any physical manner in the bread and wine, but spiritually. Furthermore, Zwingli thought that the only way to root Roman Catholic error out of Christian practice was to separate these outward observances as clearly as possible from the thing that mattered most, faith in God’s promise. Though Zwingli could affirm a whole host of great things about the power of the Supper, he refused to condone fancy language about “real presence,” because even if it was so carefully described as to avoid actual theological error, still it left open too wide a door for the old errors to return.

For Luther, Christ is present in the Lord’s Supper in a much thicker way. In the Supper, the bread and wine fulfill Christ’s pledge, “this is my body, this is my blood,” and believers partake of Christ in reality. For Luther, the Roman Catholic error was best combatted by rejecting the idea that it was a sacrifice or a good work that merited anything in God’s eyes. He also rejected transubstantiation, the Roman theology that said the bread and wine turned into the body and blood of Christ (though they retained their own physical characteristics). How was the body of Christ present in the supper? Not as the bread, but in it, and with it, and under it.

Luther and Zwingli had already hashed this out on the road to Marburg, and if anything, their face-to-face discussion just let them be clearer about their disagreement. They did, however, determine to shut up about it in public, and stop publishing pamphlets against each other, given the political situation and the need for Christian peace among believers who agreed on so much.

In the next generation of the Reformation, cooler and more systematic heads would prevail, and international Protestant unity was a little more evident. Luther vs. Zwingli is one thing, but Melanchthon vs. Calvin is another. As the two traditions developed, they simultaneously became clearer about their disagreements (it’s actually a fascinating Christological argument underlying all of this, as Luther correctly noted) and closer together in terms of cooperation and fellowship. The Reformation was happening fast, so it was too late for later agreements to accomplish the political goals imagined by Marburg. But it was a good theology conference, with a score of 14 out of 15 on unity, and even an agreement to play nice on the fifteenth point.