Here is a little two-minute video presentation of the story of Elijah and the widow of Zarephath (1 Kings 17:8-16). The team at my church’s media ministry put it together, and it features drawings by my kids, accompanying narration by our friend Anna.

This video features a child’s voice and children’s drawings, but it’s not exactly a story for children. In fact, it’s a story that hits you hardest if you’ve got children or other dependents. It’s only when you feel the widow’s extra grief at being unable to provide for her son that you grasp the significance of what God asks of her.

There’s no reason to think that the widow at Zarephath was anything but a good provider. There was a recession drought decimating the region (it would last three and a half years), and she was being as resourceful as a single mother could be. She was no money-grubber, but when we meet her she is out there grubbing, for firewood if not for money. People with kids will do almost anything to keep food on the table, and rightly so: Paul says “if anyone does not provide for …members of his household, he has denied the faith and is worse than an unbeliever.” Stooped over gathering sticks? That’s a posture of responsibility.

But the problem with shouldering that burden of responsibility is that it so easily slips into an attitude of clutching, clinging, clasping, controlling, and closing off our daily affairs from any contact with God. Nothing, except maybe pain, is as effective as poverty at painting the skylight black. This woman was keeping a precise budget in her mind: This many sticks, that much flour, this much oil. She had managed her resources down to the last bits. She was at the end of a long and depressing trail of financial planning. She knew her household economy perfectly, and that economy was exhausted.

That’s when Elijah appears, and says, essentially, “Me first.” She’s about to make the last possible loaf of bread that she and her son will ever eat, and Elijah lays claim to the first helping. No human has the right to do that. But Elijah is a prophet, and he is not speaking from human initiative. He was told to ask for the food, and furthermore he was told that the woman had been told to feed him. All of this is under the authority of God’s word. And it ends miraculously.

The word of God through Elijah gave her everything: Not just more food, but food that was now the vehicle and the medium of a relationship with God. Her cramped personal economy opened up to God’s presence, and in sharing her food with the prophet she found her family sharing their daily bread with God. And make no mistake, this was daily bread: Every single day until the drought ended, that widow reached back into the jar and scooped out the last handful of flour. Day after day after day, she poured out the last drops of oil. And every time she reached into that dark jar, God took her hand and filled it.

I don’t know if this story is the background of Jesus’ instruction to pray for “our daily bread,” but I can’t think of a more striking instance of bread that is daily. I do know it was among Jesus’ favorite stories from the Old Testament, which he cited to show God’s surprising care for Gentiles, and a model of responding in faith to the word of God.

And it’s clearly a story about giving that comes from need more than from fullness. The widow of Zarephath had a desperate need for resources, and an even deeper need for God’s presence. Both needs were met when she gave to the prophet. It’s tempting to hold back on generosity and on church giving when times are tough and we have families to worry about. But clutching the daily bread is not the answer. For one thing, when it runs out it runs out, and there we are. But more importantly, what we really need is fellowship with God.

God doesn’t need the money, nor do his prophets: If God wanted to get bread to Elijah, he could have had ravens drop it on him from the clear blue sky again. God had a plan in place for Elijah, for the widow, and for her son, to transform their meager holdings into treasures in heaven, and their daily bread into communion with God. 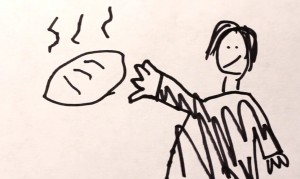