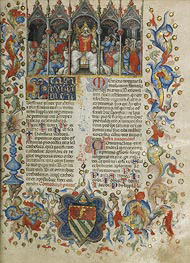 A couple of weekends ago my wife and I took our kids up to the Getty Museum in Los Angeles. The opportunity to visit the Getty at will is certainly one of the perks of living in southern California. We were invited to go to the Getty with one of my students and her significant other. It was a good time and it gave us an opportunity to expose our kids to some great art. According to Brendan (my six year old), his favorite part was the “grown-up” stuff. Of particular interest that weekend was a temporary display entitled Music of the Masses: Illuminated Choir Books. This modest display contained some very great manuscripts with interesting illuminations but it was the one pictured here that really got my attention. Painted by the Master of the Brussels Initials in Bologna sometime between 1389 – 1404, this folio is from a missal (a book that contains the spoken prayers and chants used by priests during a mass) and begins the “Te igitur clementissime” (“Thus you most merciful”) which occurs at the very beginning of the mass. What I really love about this page is the scene at the top, where the priest is lifting up the consecrated host during the Mass. Everyone’s gaze is directed at the elevated host, including the group of monks on the left who are obviously singing during this moment of the mass. In other words, their eyes are no longer fixed upon the choir book but are, rather, directed toward the host. Now, it is a known fact that at this time (i.e., the late 14th century) many “common” people did not partake of the elements at a Mass, either because of their perceived unworthiness or because the local priest thought it too dangerous to entrust the body of the Lord to such simple, ignorant peasants. (By this time, few people are ever drinking from the chalice.) It’s also common to hear of stories from the Middle Ages where people ran from one church to another not to eat the host, but simply to watch its elevation. Church builders got smart and started to leave voids in churches so that one could merely peer through the wall of the church and see the host being elevated. Basically, you didn’t even need to go inside a church anymore to receive the benefits of the Mass. This image perhaps represents this perspective well when it pictures everyone merely gazing on the host though perhaps the Master of the Brussels Initials imagined that these very same people would then partake of the element. Regardless, gazing on the host was meritorious in the Middle Ages. 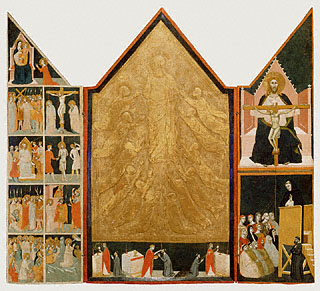 Another piece of medieval art from the Getty’s permanent collection is the Chiarito Tabernacle. This triptych was commissioned in Italy around the 1340s by Chiarito del Voglia, a layman who likely wanted the piece for his own private chapel. The central panel was executed in gilded gesso relief and shows the apostles receiving communion from rivulets of blood that emanate from Christ’s navel. The left panel displays scenes from Christ’s Passion. Interestingly, the scenes below the main panel feature Chiarito participating in the Mass. In the center image, he, like the Apostles, partakes in the Mass, represented by a rivulet that runs from Christ’s navel into his mouth. In the right panel, Chiarito and others listen to a monk preaching. During the sermon, Chiarito sees the blood of Christ flow down from the Trinity to communicate the gathered crowd. What is so interesting about this work is that here, unlike in the Master of the Brussels Initials’ missal, those pictured are partaking in the Mass itself and not just gazing on the host (though Chiarito is pictured doing this in the bottom right of the center panel). In fact, they are receiving the blood of Christ, the Eucharistic element that was often withheld from the laity, and it is important to remember that Chiarito was a layman himself. Here the people are eating, not just gazing.

As a medievalist, I am fascinated by these images. In one, the people are enraptured by the simple gazing on the body of Christ. In the other, the people are eating the very blood of Christ. In appears that in the Middle Ages there were those who were devoutly partaking of the Mass, as well as those engaged in the act of merely gazing on the consecrated host. Reading late medieval texts often reveals a sacramental world that most people today would find very offensive: communion in one kind (i.e., the bread), infrequent communion (Lateran Council IV in 1215 had to legislate that communion should be received at least once each year) and an emphasis on the act of consecrating the elements that can sometimes read more like an account of pagan sorcery than Christian liturgy and theology. But these pieces of art remind us that perhaps both gazing and eating could be done devoutly and that both were important to people in the Middle Ages. For me, these two paintings trump the texts that I’ve read and help me to see that not everyone was merely happy to see Jesus under the accident of bread, but that others desired to “taste and see” that the Lord was good.