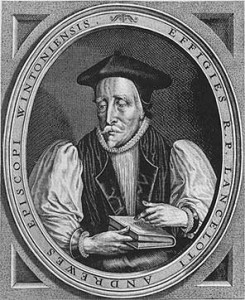 The Right Reverend Father in God, Lancelot Bishop of Winchester, died on September 25, 1626. During his lifetime he enjoyed a distinguished reputation for the excellence of his sermons, for the conduct of his diocese, for his ability in controversy… and for the decorum and devotion of his private life.

Eliot goes on to say that Andrewes’ writing style makes his sermons “rank with the finest English prose of their time, of any time.” Eliot is right. Andrewes made the English language jump and stretch and vibrate, and he did it when the English language was youngish, beginning in the days of Queen Elizabeth. Andrewes (successively bishop of Chichester, Ely, and Winchester) outlived Elizabeth and also served under James I. In fact, he worked as one of the translators of the King James Bible (he was on the Cambridge-based Old Testament team of translators), so you’ve probably got some Andrewes writing in your home already, in the KJV.

As a prose stylist, one of the secrets of his success is that an unending, many-sided habit of translation was always going on in his head. He had a mind full of the classical languages (Greek and Latin) plus Hebrew. He was always stretching the Queen’s English to fit the contours of a holiness older and larger than his mother tongue. Take any paragraph, almost at random, from his sermons, and you’ll find food for thought and grace of expression. Here is a paragraph from his sermon on the verse from 1 Corinthians 15, “But now is Christ risen from the dead:” (broken up here into several short paragraphs for easier web reading)

Our restoring is but a promise —shall be restored: that necessarily refers to a party that is to make it good.

Who is that? Christ. “Christ is our hope.”

Why, “hope is joined to the living,” saith the Wise Man. Christ is dead; buried last Friday. If He be our hope, and He be dead, our hope is dead too; and if our hope be dead, our labour will not live long, nay both are buried with Christ in His grave.

It was their case this day that went to Emmaus: say they, supposing Christ to be dead, nos autem sperabamus, “we were once in good hope” by Him, that is, while He lived; as much to say as, “Now He is in His grave, our hope is gone, we are even going to Emmaus.”

But then after, as soon as they saw He was alive again, their hope revived, and with their hope their labour; and presently back again to Jerusalem to the Lord’s work, and bade Emmaus farewell. So He leads us to labour; labour, to hope; hope, to our restoring; our restoring to Christ’s, Who, as He hath restored Himself, will restore us. also to life.

And this keeps us from going to Emmaus. It is used proverbially. Emmaus signifieth ‘a people forlorn:’ all that are at sperabamus have lost their hopes, are said to go thither; and thither we should all go, even to Emmaus, but for the hope that breathes from this verse, without which it were a cold occupation to be a Christian.

There is almost too much in these sentences. Half a dozen sermons could be spun out from the suggestions offered here in one pargraph. Lord, save us from going to Emmaus! Andrewes puts his head down, focuses on the text, and argues his way through it like a translator, like a poet, like a metaphysician, like a pastor, like a punster, like an oracle, like somebody who finds the word of God boundlessly fascinating and fruitful.

There’s plenty of Andrewes out there to read, and it’s all in English, though you have to make your way over the bits and pieces of the other languages that constantly strew the path of his prose. He’s best taken in small doses, so don’t binge.

Time fails me to do justice to Andrewes’ most powerful work, the series of private devotions he left in his own hand, mostly in Greek but also in whatever other language crossed his mind as he prayed. Also available in English translation, but I’m on the lookout for a perfect edition that lets English readers experience the astonishing thought-patterns of Lancelot Andrewes at private prayer. 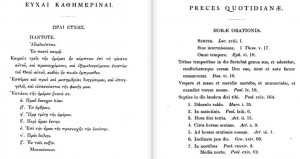