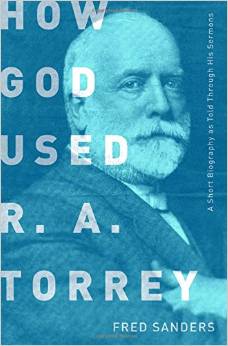 Moody Publishers has just released my book How God Used R. A. Torrey: A Short Biography as Told Through His Sermons. Check out the keen cover design. It’s a very affordable paperback, and the digital edition is also nicely done.

How God Used R.A. Torrey gathers 13 of his greatest sermons, according to me. About ten years ago I read all of Torrey’s published sermons and selected the two dozen that best captured his life message and his style. After a couple of rounds of revision, I narrowed it down to about 15, and assigned them to students in the Torrey Honors Institute (Johnson House) as part of their senior curriculum on rhetoric. For about six years now we’ve discussed these sermons with our students, and we’ve got a pretty good sense of how they work. I had to cut a few more sermons to get the volume down to the right size, but it was worth doing to trade our ungainly course pack for this handy book, and make it available to the general public.

What’s unique about How God Used R. A. Torrey is that it is arranged biographically, because I chose sermons from the major phases of his ministry. So as the sub-title indicates, the book also serves as an introduction to the life of R. A. Torrey for people who don’t know him (“one of the most important evangelical leaders most Christians have forgotten,” as Doug Sweeney calls Torrey in an endorsement for the book).

I made sure to include sermons representative of each of the three major phases of Torrey’s ministry: his years working with Dwight Moody and at the Moody Bible Institute, his years as the world-travelling revival preacher, and his years in Los Angeles as the dean of the Bible Institute of L.A. (BIOLA) and pastor of the Church of the Open Door. Torrey changed his style in each of these phases of ministry. In the early sermons you can see that he’s taken Moody’s basic evangelistic style and added a backbone of apologetics to it. During the world tour he preached with a prophetic urgency appropriate to altar calls and follow-up rooms, but also a surprisingly poetic allusiveness that can linger in heart and haunt the conscience. As pastor and professor at BIOLA, he became very concerned with the solid foundation of Christian doctrine, giving more attention to an orderly presentation of the objective basis of Christian discipleship.

A bonus feature is the appendix, which publishes for the first time anywhere a brief autobiographical sketch that Torrey wrote, giving another angle on his life and ministry.