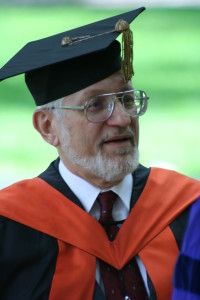 One of the professors who most impacted me over the course of my studies in theology was Daniel Migliore, Professor Emeritus of Theology at Princeton Theological Seminary. In fact, we even share a birthday, July 22—though he is my elder by some years.

I found in Prof. Migliore something I had seen in others, but not to the same extent. As he lectured (and it’s saying something that I appreciated a lecture), he would, as a matter of course, engage the thought of a wide range of theologians. Some of them he had learned from a great deal and appreciated deeply. But others, he disagreed with just as deeply. The wonderful thing about him, though, was the way that he interacted with those he disagreed with.

He did not critique, dismiss, overlook or disdain. Rather, he showered them with such care and charity, he was so diligent in locating their thought within the broader context of their experiences and history, he was so disciplined to joyfully affirm anything he could affirm, that I found myself deeply appreciating those whose views distressed him.

When Prof. Migliore turned his attention to critique (for charity must critique, lest it lapse into mere tolerance), his critique was deadly. But it was a deadly instrument in the hand of a surgeon, intent not on bludgeoning, but on curing, and therefore removing what must be removed, fixing or repairing what could be restored, and retaining anything that could be retained.

The resulting example was as compelling a vision of charitable theology as I have ever seen, a vision of theology intent on the ministry of reconciliation within the theological world. There is plenty, I am sure, that Prof. Migliore and I would disagree about—but I would embrace his critique more willingly than that of nearly anyone else, for I would be in the hands of one of the best surgeons in the land.