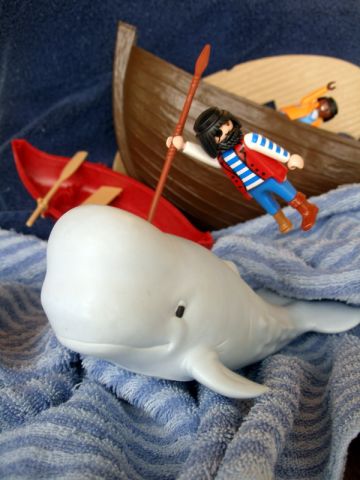 (Spoiler alert: the whale is mean and the captain is crazy.)

What a book is Melville’s Moby-Dick! Everyone knows that it’s a whopping leviathan of a novel. There are almost four hundred words just in the titles of the chapters. Melville, rarely subtle, spends more than enough pages making sure you know that it’s a good idea to compare books to whales, and some of them are extra jumbo. And a big part of the fun in Moby-Dick is the way the narrator (ultimately, behind him, the author as well) toys with the reader, building up just enough plot and suspense to lure the reader into yet another long discussion of whale phrenology. I bet this is among the most frequently thrown-across-the-room books in English literature. “And so at last we came closer to the whale. Which reminds me, how have all cultures in the history of the world measured distance?”

And if you know anything about the book, you know to expect Captain Ahab to be stark raving mad, making speeches that would strike King Lear as ill-considered and make Hamlet blush. About the time he’s tempering his harpoon steel in heathen blood and calling it a baptism in nomini daboli, you can tell something’s stinky on the Pequod. Nobody should read this book unless they’re in the market for a descent into the maelstrom, and Melville delivers. Plus there’s at least a hundred-page ripping good adventure story hiding here among these six hundred pages.

But the main reason Moby-Dick has mesmerizing power is Melville’s writing style. Nearly every sentence is a thrill ride, and I can never predict where any of them are going. Nearly every page has a word that I have never seen used in that way. The verbs alone are uncanny. The adjectives don’t behave like they would in normal books.

Dip in anywhere, and you find phrases and sentences that work the charm:

“…every dimly-discovered, uprising fin of some undiscernible form, seems to him the embodiment of those elusive thoughts that only people the soul by continually flitting through it.”

“There is no life in thee, now, except that rocking life imparted by a gently rolling ship; by her, borrowed from the sea; by the sea, from the inscrutable tides of God.”

“…the foot-prints of his one unsleeping, ever-pacing thought. …you could almost see that thought turn in him as he turned, and pace in him as he paced…”

“he fan-tails like a split jib in a squall.”

“It was Moby-Dick that dis-masted me.”

“…he brimmed the harpoon sockets with the fiery waters from the pewter.”

When Ishmael the narrator gets into his element, he can be spellbinding. And when Ahab delivers one of his soliloquies, the effect is incantatory. Moby-Dick is not just a classic as the Big Fat American Novel; it’s also classic on a page-by-page basis.

Pictures on this page document a Playmobil re-enactment of some key scenes. How do you study great books? 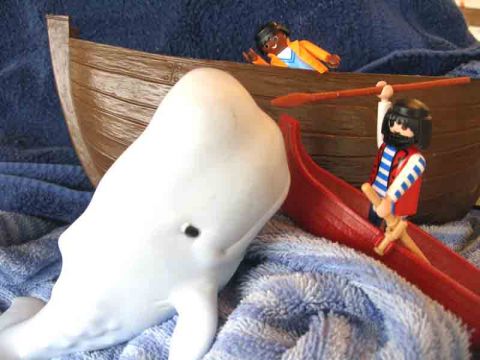