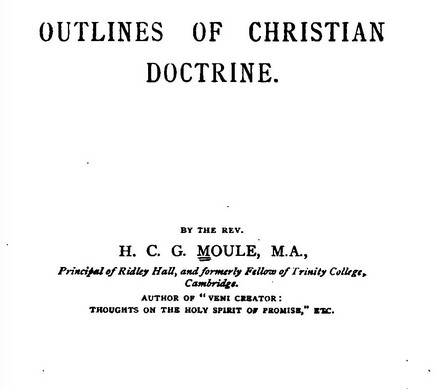 More good stuff from HCG Moule’s Outlines of Chrisitan Doctrine. These bits are mainly on the incarnation, which cannot be considered except along with the atonement, for reasons on which Moule is luminously clear.

Certain developments in nineteenth century theology had led to a kind of over-development of the doctrine of the incarnation, and Moule was concerned to walk that back. Writing somewhere between the academic and the popular level, he went after the difficult cluster of issues that emerge when you try to think two gigantic doctrines together at once.

Moule discusses, without naming names, thinkers who describe “the Eternal Word in a union aboriginal and necessary with every man.” The idea is that “manhood stands in so near a revealed relation to God that is must be eternal, a parte ante, in the Person of the Son.” This makes the Son of God “Primal and Archetypal Man” from eternity, “summing up in Himself all mankind, all man, all men.”

The conclusion is the view that has been called “incarnation anyway,” but a particularly sloppy version of it:

And thus, it is maintained, Incarnation was divinely inevitable, quite irrespective of the Fall. It was a thing of original and supreme purpose, in order to the realization of the eternal Idea of Humanity, the glorification of man in the Son, and the Son in man. The Fall occasioned an application, as it were, of this sublime process to a special end by the way. In passing towards the original goal of a final and universal glorification the Incarnate deals with the intruding, isolated, and finite problem of sin, by suffering and dying with relation to it.

And what relation to sin does the incarnate Son adopt? A relation “not of a substitutionary kind, or at least not nearly so much of that kind as of the kind of a mysterious effusion of Christ’s life and power into humanity through the liberating process of His self-sacrifice in death.”

What seems to be happening in this errant theological thought project is this: in addition to or alongside of the atonement, the incarnation now emerges as another, distinct pole for soteriology: not the context or the grounding for the atonement, but a node of salvation in its own right.

From such a doctrine one result appears to be that the Eternal Christ is in a necessary and eternal union, as Primal Man, with every man; holding a connexion, vital and federal, with him, antecedent to and independent of the work of atonement and of regeneration. In the original constitution of the Christ, on this view, every man is in Him, and He in the man. The spiritual awakening of the man, on this view, may e explained as a discovery of the Archetypal Christ latent in him, and his place in that Christ in the eternal order. Gal. 1:16 has been so explained.

It seems to me that once you cede that sort of illegitimate independence to the idea of incarnation as salvation, there’s no way to stop it from swamping atonement. The doctrine of the incarnation is so big, so holistic, so fascinating, so comprehensive, so universal, that it threatens to dwarf the cross.

Moule’s fundamental objection, though he puts it in as genteel a way as possible, is that the view under consideration is unbiblical:

But this refined and abstruse theory has very slight semblance of support in Scripture. There the creation of man is ‘in the image of’ not distinctively Christ, but God. And a New Creation, New Birth, of the individual is revealed as wholly necessary, and as expressly related both to a previous spiritual death, and disunion from God, and to a pre-temporal choice and adoption in Christ, redemption by His Death, incorporation into Him, and likeness to Him.

And the view stated fails to harmonize with Scripture as regards the position of man, as man, before God. Scripture does indeed represent man as made in the image of God, and capable of a most wonderful and blissful union with Him. But this is represented as due not to an eternal and necessary order, but to divine free goodness and condescension. Humanity is certainly not, in Scripture, either a phase of Deity, or one of Its contents.

Another way to put the criticism is that it seeks union with Christ as an aspect of anthropology, or as an aspect of the deep roots of anthropology in the doctrine of God. There’s nothing wrong with wanting to root union with Christ in something deeper or more “racial” (that is, having to do with the entire human race) than individual salvation; the thirst for such a union is awakened by the gospel itself. But the thirst should be satisfied by reference to the atonement, not by appeal to the transcendental presuppositions of the incarnation: “every man is so related as to have the right to say, ‘I am of that nature which in Christ is united to God; I am of that human world for which Christ is the Propitiation; I am of that mankind which He redeemed.”