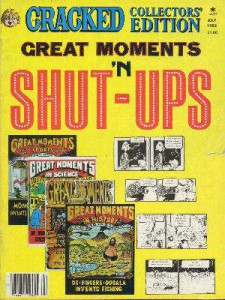 Cleaning out the garage to make room for some basic woodworking tools, I found what I believe is my first publication ever. That is, it’s the first time I wrote something, was paid for it, and saw it printed by a national publisher.

It’s from 1982. I was 14 years old. The publication was Cracked, a satire magazine that was started in 1958, and was widely recognized to be an imitation of Mad Magazine. The magazine is now out of business, though there is a website with the same name that is still running. I’m not linking the site, because if it were a neighborhood, you wouldn’t go there: It’s the side of town just off-campus with the trashed-out houses full of frat boys behaving badly.

But ah, Cracked Magazine in the 1980s… Of all the cheap rip-offs of Mad Magazine (like the magazines Crazy, Sick, Plop, Nuts, Panic, etc.), Cracked was clearly the best cheap rip-off. It had loads of art by the omnicompetent John Severin, for one thing, and plenty of other talented writers and artists, doing immature satire for an immature audience. Thousands of pages of lowbrow mind-candy, and I ate it up for years of my mis-spent youth. 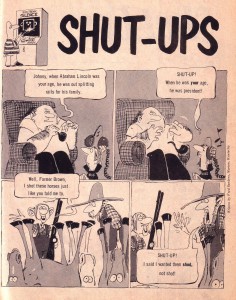 One of Cracked‘s standard features was Shut-Ups. Shut-ups were two-panel jokes: Panel 1, somebody says something. Panel 2, somebody else says “Shut Up!” in a way that reveals the whole situation is surprisingly different than we thought it was. That’s the whole formula, and they did it over and over and over. (For Mad fans: these were the poor man’s version of Al Jaffee’s Snappy Answers to Stupid Questions)

If it sounds like Shut-Ups are the kind of thing anybody could write, that’s because they’re the kind of thing anybody could write. At least anybody with a shred of smart aleck in them. Even the editors knew this, so they started advertising for their readers to write their own Shut-Ups and send them in. The best ones would be turned into cartoons by somebody on the staff, and would be published in a special issue. 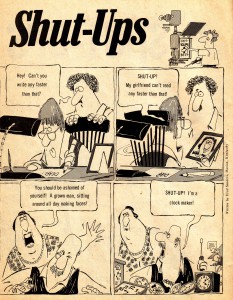 Fourteen-year-old me, living in western Kentucky, thought that was a great idea. So I sent in a bunch of Shut-Ups, and Cracked bought four of them.

I was very excited. I had done things for school newspapers and had drawn my own comics just for fun, but this was the first kiss of print. Judging from the jokes I sent in, I probably just went through a standard joke book and re-phrased the jokes in Shut-Up form. All things considered, it’s surprising they’re as good as this: 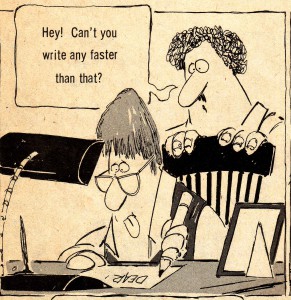 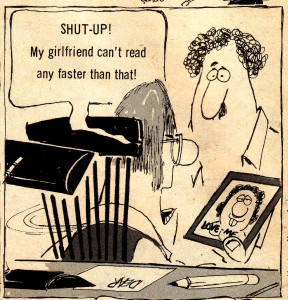 Yuk yuk yuk. The others are much the same (click through to them on the page images above).

Much of the credit for these things being readable goes to the Cracked artist who got the assignment; the not necessarily enviable assignment of taking jokes from 14 year olds in Kentucky and turning them into cartoons. He did a great job, though. I recognized his work from previous issues of Cracked; it was notable for rapid lines and confident goofiness, and by the signature “Ricig.” He was Mike Ricigliano, who has gone on to be one of the most prolific and opinionated artists working in the niche of sports cartooning.

But what mattered most for me was that I wrote a joke, sold it for money, and got it published in a national magazine. There it was, in black and white, for sale from coast to coast: my byline!

The real question for me now is, how do I put this on my Curriculum Vitae?