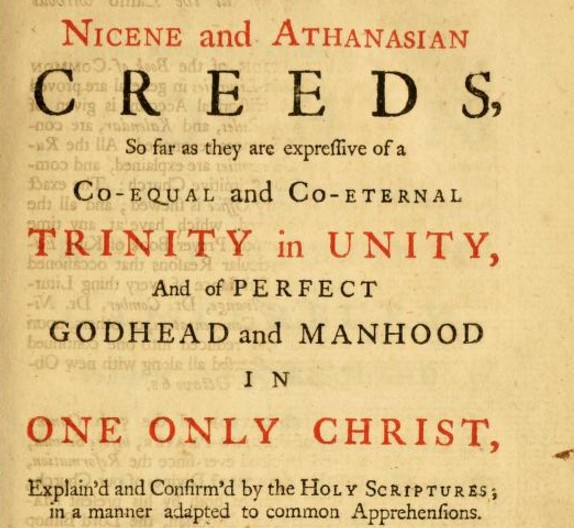 In brief presentations of the doctrine of the Trinity, we can observe two different styles.

On the one hand is a kind of genetic style, which introduces the three persons in a salvation-historical framework, leading off with the Father, then adding the Son, and then (after a brief historical account of the work of the Son) introducing the Holy Spirit. You have to read the whole exposition to meet all three persons in due course. We could call this style the Nicene style, because its classic formulation is the Nicene Creed of 381 (though the Apostles’ Creed also follows this format).

On the other hand is a kind of static or equilateral style, which offers the word ‘Trinity’ as an advance organizer and then introduces the three persons all in the same line: Father, Son, and Holy Spirit. We could call this style the Quicunquan style, after the so-called Athanasian so-called creed, known from its opening words as the Quicunque Vult (sometimes spelled Quicumque Vult).

There’s no question of them contradicting each other, which is why I call them styles rather than theologies. They deliver the same material, but pursue different strategies of presentation.

The Nicene Style is more narrative, the Quicunquan more schematic. And each has its own advantages and disadvantages.

The Nicene style has the advantage of drawing out the natural connections between the persons of the Trinity, which means it jumps off of the history of salvation and then leads with the material content of the relations of origin. “I believe in one God, the Father Almighty, Maker of heaven and earth,” it begins, as if that were the whole story. Then it introduces this other character and tells you he’s been there the whole time:

one Lord Jesus Christ, the only-begotten Son of God, begotten of the Father before all worlds; God of God, Light of Light, very God of very God; begotten, not made, being of one substance with the Father, by whom all things were made.

–which means you have to go back and re-think what it means for God the Father to be the maker of heaven and earth. Apparently he neither made everything by himself nor existed by himself. “Father” must have always implied “Son,” as it turns out, though the Nicene style’s strategy is not to say so up front.

Then comes a thumbnail sketch of the gospel story, the life of Christ. And finally we meet a third character, the Holy Spirit, who is not only “the Lord” but is also the “Giver of Life,” is to be worshiped, and who “proceeds from the Father” {filioque if you’re feeling ok}.

The Nicene style demands that you follow the discursive line of exposition to see what emerges, and then mentally go back and insert the conclusion as the presupposition that was silently there all along.

Because of this structure, the Nicene style produces expositions that are great for re-reading. The creed itself (like the Apostles’ Creed) is fantastic for repeating, because it benefits from, to put it as uglily as possible, a synchronic-diachornic dialectic.

Believe it or not, the Nicene style draws criticism for being inadequately trinitarian, because it doesn’t connect the dots or say the word Trinity. It puts too many other words between the personal names. Even more astonishingly, it draws criticism for being subordinationistic, because it leads with the Father and introduces Son and Spirit in a sub-ordinal sequence (second and third).

Perhaps it strikes you as bizarre that something like the Nicene creed (or any exposition following what I am calling here the Nicene style) could be suspected of being too subtle (!), inadequately trinitarian (!!), or subordinationistic (!!!). The reason it strikes you as bizarre is because it is bizarre. (Here are some more exclamation points for you, in case you need to increase  your daily dose of outrage:  !!!!!!!!!!!)

At least those complaints succeed in recognizing the Nicene style’s characteristic expositional strategy. And they also show why a supplemental strategy, the Quicunquan, has a role to play.

The Quicunquan style sets the three names as close together as possible and gathers them under the title “Trinity,” as in:

Having pulled the concepts together tidily, the Quicunquan style can then work back and forth across a three-one dialectic: “The Father eternal, the Son eternal, and the Holy Spirit eternal; and yet they are not three eternals but one eternal.” It prompts the reader to seek clarity about what is one (essence) and what is three (persons).

In due course, the Quicunquan style will have to appeal to the relations of origin, without which there is no reason to keep rehearsing the three-one data. In the Athanasian Creed itself, the Son’s begetting and the Spirit’s proceeding are eventually stated in a compact bundle of distinguishing characteristics (numbers 21 to 23 in this list). Perhaps the relations of origin produce a kind of “aha!” when they are finally disclosed in the Quicunquan style. 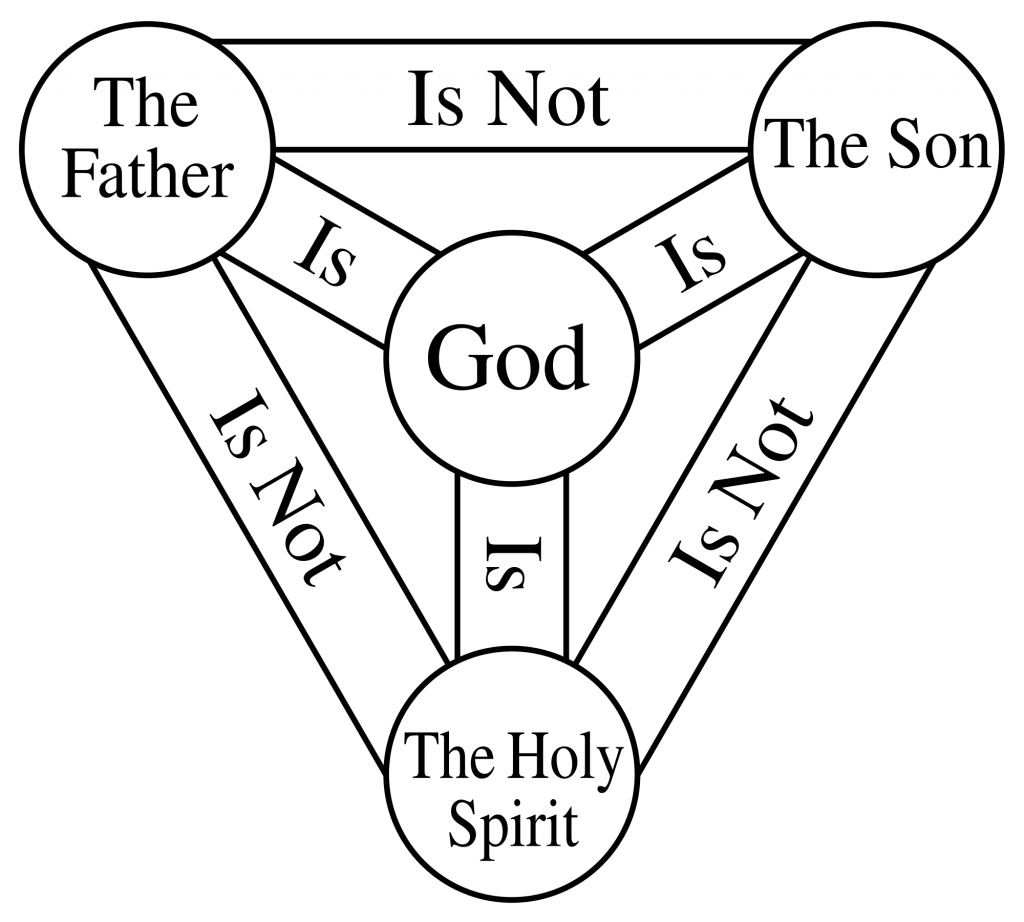 But the Quicunquan style doesn’t formally require the relations of origin to be made explicit. For example, consider what happens when the logical diagram called the Shield of the Trinity is used as a starting-point for teaching the doctrine. It maps certain relations between the persons with great clarity. But have you ever considered how strange it is to fill in the sentence “The Father ______ the Son” with the verb “is not?” Of all the things the Bible affirms about these two persons, and of all the things the Nicene style highlights, the bare assertion that these two are not each other seems to be a kind of analytic residue.

I considered writing “I am not you” into my wedding vows, but to be honest it seemed a little cold and abstract of a point to be making, even though I admit it is absolutely logically necessary and it is presupposed in everything else I wanted to say in those vows.

The Shield of the Trinity is a very useful diagram. As the diagrammatic distillation of the  Quicunquan style, it can support a great deal of solid catechesis. But if you use it, make a mental note: don’t forget to teach the relations of origin as well.

With the Nicene style, you need no such mental note. It’s built in. Perhaps if you’re using the Nicene style you might need a mental note reminding you to use the word Trinity, or to gather the three names as compactly as possible, or to state clearly and explicitly the coequality and coeternity of the three.

A fantastically balanced and integrated combination of Nicene and Quicunquan styles is the Creed of the 11th Council of Toledo, from the year 675. And plenty of theologians have integrated both styles well in their extended expositions of trinitarian doctrine.

Both styles have biblical warrant. We might say the risen Lord spoke in Quicunquan idiom when he said to baptize in the name of the Father, the Son, and the Holy Spirit, in the 28th chapter of a gospel story with a Nicene plot.