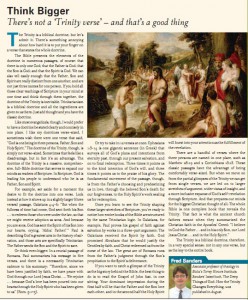 Earlier this year I had a one-page piece about the Trinity in Biola Magazine. My goal was to show that the doctrine of the Trinity is a biblical doctrine, and my hook was to begin by conceding that all the elements of trinitarianism are not all brought together in one verse, and then to show how that’s actually an advantage. The doctrine of the Trinity is presented diffusely in Scripture, because it is “a massive, comprehensive, full-Bible doctrine that serves to expand our minds as readers of Scripture.” So instead of hunting for the one killer verse, we should seek to grasp the total import of Scripture. I called the piece “Think Bigger: There’s Not a ‘Trinity Verse,’ and That’s a Good Thing.”

Philosophy prof Dale Tuggy responded to the piece back in March on his blog, trinities.org. Tuggy teaches at SUNY-Fredonia and has published a number of impressive articles in philosophical theology (his most important programmatic piece is probably 2003’s “The Unfinished Business of Trinitarian Theorizing,” and he also wrote the 11,000-word entry on the Trinity in the Stanford Encyclopedia of Philosophy).

Why is he perusing Biola’s alumni magazine and responding to a short, nontechnical piece about the Trinity? Because it turns out he’s a Biola alum! But Tuggy has also recently clarified what some of his readers have been suspecting in the last few years: that his own position on the doctrine of the Trinity is unorthodox, that he is in fact not trinitarian but something like a “humanitarian unitarian” (a position which needs a better label, and which he will be filling out in future writings). Tuggy the analytic philosopher working on trinitarianism was interesting to me (in 2006 I called his new blog “promising”); Tuggy the analytic philosopher working on anti-trinitarianism drops several notches on my scale of interestingness. Arguments are still arguments, and need to be dealt with on their own merits, of course. But research programs are motivated, and knowing the motivation helps me decide where to invest my study time. I’ll still keep an eye on Tuggy’s work (I like his attempts to clarify “mysterianism,” love the way he pesters social trinitarians, and have high hopes that he’ll keep hammering away at the distinction between a person and a faculty until somebody does something about it). But I won’t keep both eyes on it.

Speaking of arguments being arguments, this post is a brief response to Tuggy’s response to my piece. Got that? It’s a surrejoinder. I’ve always wanted to write a surrejoinder. No, wait, actually, I hate them. It’s hard not to sound defensive in this genre. I’ll keep it short!

Tuggy graciously concedes that I’m writing in a popular, devotional vein, so my piece shouldn’t be held to too high a standard of rigor, precision, or detail. And he engages the piece pretty much on that level, which I appreciate. He gives me credit for knowing the complexities of the doctrine and its development, but thinks I’m covering those tracks too much when I simplify things down to “Trinitarianism is a biblical doctrine and all the ingredients are given to us there: Just add thought and you have the classic doctrine.”

In part, his complaint is about the trade-offs made in popularizing the doctrine of the Trinity. Here I think we disagree already: I think trinitarianism is a spiritual reality, owned by the people of God since the Father sent the Son and the Spirit, and confessed rightly by those without special training. Philosophers and theologians are allowed to work at the task of clarifying and refining it, but they didn’t invent it. Tuggy thinks there is no such thing as “the” doctrine of the Trinity, and that there couldn’t even be one until thought rises above a certain threshold of analytic clarity and terminological precision. I’m all for clarity and precision, and I need collegial help attaining it in my doctrinal thinking. But when I say Trinity, I am not pointing to a successful thought project or mental model. I’m pointing to something real, something given by God, something that Christian devotion and orthodox categories pick out, but sub-trinitarian theologies fail to. I just can’t think about popularizing trinitarianism as a matter of descending from the academic heights with an accomplished, or soon-to-be-accomplished, doctrine of the Trinity in hand. To popularize the Trinity, I use shorter words, go for the big picture, and leave out details, but I’m trying to tell the truth, the whole truth, and nothing but the truth of the Trinity as a biblical doctrine.

When trinitarianism is presented at that popular level, it is following the pattern established in the Bible itself. That there is such a pattern is what I assert and Tuggy denies. He seems to be scanning Scripture for a particular kind of argument, and failing to find it, he declares that there is no Trinity there at all. I think there is something right there in Scripture that he is missing.

If the Trinity’s in Scripture, how could it be missed? As a little case study, take my article. Best I can tell, Tuggy didn’t catch the main point I was trying to make. here’s his version:

After quoting a few passages in which the three are mentioned, Sanders says that “entire books of the Bible are structured by the same Trinitarian logic“. No, he’s not really talking about logic here. His idea is that you can see a pattern of the Three, in some sense working together; you see a co-operation of three agents.

The hotlink in the sentence “he’s not really talking about logic here” is telling. It takes you to the Internet Encyclopedia of Philosophy’s entry on propositional logic, that swell and austere discipline that breaks all claims down to individual building blocks so we can get something done with them. I’m all for that. But when I say that books of the Bible are structured by a Trinitarian logic, I’m not alluding to a field in philosophy. I’m using the word “logic” the way it’s used in the rest of the English-speaking world outside of philosophy. It means something like the principles of demonstration that are appropriate to a subject. The logic of life, the logic of events, the logic of foreign affairs, the logic of cheeseburgers, etc. When you read literary, historical, rhetorical, or belletristic texts, it’s important to attend to the way they’re working.

In other words, there was a logic to my article, and a reader looking for logic-brand logic missed it. Here’s the pattern, the flow of thought, the drift, of my little article: I wasn’t just “quoting a few passages in which the three are mentioned.” Instead, I was building a pattern of expanding scope. From 3 verses, to 5 verses, to 12 verses, to 6 chapters, to 16 chapters, to a whole gospel, to the whole Bible. And I signalled that pattern a few ways, including talking about “larger stretches of argument, wider vistas of insight, and a more inclusive expanse of God’s self-revelation through Scripture.” That’s not a few passages, but an intentional pattern that I thought of in my mind, and then structured the article according to. If all you see is a bunch of Bible quotes, you’re not seeing the structuring relationships that account for them being where they are.

Nothing hangs on somebody reading my little article right. But the analogy is that God writes really good, really important articles. God put Scripture together according to a certain pattern that matched salvation history, which in turn matched the eternal divine life.

There’s one thing I would criticize Sanders for. It is merely spin to claim that it’s a good thing that the doctrine isn’t clearly taught in any one place in the Bible. Even if it is correct that what Sanders calls “the” doctrine is the best reading of the Bible, all things considered, it still would be more clearly a teaching thereof, and so less disputed and less confusing, if it were expressed, as it were, in one breath.

But I think that in Scripture, God succeeded in revealing the Trinity the way he wanted to. I understand why that seems like “merely spin” to Tuggy, but I mean it in earnest. It’s not just a ploy, it’s a brief sketch of how I develop the scriptural presentation of the doctrine of the Trinity. It deserves a fuller treatment; I promise to write more about it at a later date.

Tuggy’s blog is called trinities, a reference not to multiple triune gods, but to multiple theories about God. There are lots of them out there, he says, and “argue we must – about the meaning of the various texts, and about which Trinity theory, if any, makes the best sense of them.” Since trinitarianism is complex and disputed, Tuggy laments that in “the mainstream American evangelical tradition” that I write in, “you’d never get the idea that Trinity doctrines were controversial (till Mormons and JWs came around),” or “that there have always been dueling, incompatible forms of them, and that anything that could be characterized as a trinitarian theology was pretty controversial among Christians from roughly 150-400, and from about 1520-1880.”

Two thoughts occur to me. First, this kind of “Wow, what a disputed mess” approach is less fun now that Tuggy’s clarified his own views. He really does think there’s never been such thing as coherent trinitarianism, just “trinities” all the way back, and none of them doing justice to the New Testament as Tuggy (and Samuel Clarke) interpret it.

Second, the demand for open discussion of first principles, and the whole “trinities” move, sounds like the sort of thing a philosopher might be inclined to say about any topic he put his mind to. Calling the field trinities is better than over-using scare-quotes to call into question “the” doctrine of “the” Trinity. But it also shows that philosophy can be used for doubting and dissolving as much as for clarifying (which of course philosophers already knew), that chasing definition can be an exercise in chasing the horizon. Once you turn a word plural to indicate that its content is essentially disputed, you’re on the roads to irresolutions. After exploring theologies of the trinities, Tuggys will have to move on to doctrines of the incarnations, and to atonements, by which gods accomplished salvations for humanities from sinses. That’s not a good way forward for theology that answers to God’s self-revelation in Scripture.