Not much is known about the late fourteenth century painter named Olivuccio di Ceccarello. What is known is that he worked in Ancona, a seaside town on the central eastern coast of Italy, from at least 1388 and was probably born before 1366, dying ca. June 3, 1439. His paintings are characterized by sharp definition and crisp contours though his style continued to evolve throughout his lifetime. Sometime around 1405 he was commissioned to paint a series of the corporal Works of Mercy.

The concept of the Works of Mercy goes back to Jesus’ teaching in Matthew 25:41-46: “Then he will say to those on his left, ‘Depart from me, you cursed, into the eternal fire prepared for the devil and his angels. For I was hungry and you gave me no food, I was thirsty and you gave me no drink, I was a stranger and you did not welcome me, naked and you did not clothe me, sick and in prison and you did not visit me.’ Then they also will answer, saying, ‘Lord, when did we see you hungry or thirsty or a stranger or naked or sick or in prison, and did not minister to you?’ Then he will answer them, saying, ‘Truly, I say to you, as you did not do it to one of the least of these, you did not do it to me.’ And these will go away into eternal punishment, but the righteous into eternal life.” In short, to be saved Jesus’ followers are to attend to their inner spiritual lives through, for example, prayer, meditation and contemplation (i.e., immaterial practices) and through outward, material actions, which in time came to be called the Works of Mercy, of which there are traditionally seven:

Feed the hungry;
Clothe the naked;
Give drink to the thirsty;
Visit the sick;
Ransom the captive; and
Bury the dead.

Moreover, Thomas Aquinas, writing just over a 150 years before Olivuccio, understood mercy as “the compassion in our hearts for another person’s misery, a compassion which drives us to do what we can to help him.” The internal pity that we have for another person Thomas calls “affective” but the action resulting from this pity he terms “effective.” Thus, the Works of Mercy are effective pity.

Olivuccio dutifully carried out his commission, painting a series of the Works of Mercy for a dorsal (i.e., art located on the back of an altar). Though it is impossible to know how they were arranged originally, they are now hung in the Vatican Museum as follows, left to right: feeding the hungry, giving drink to the thirsty, clothing the naked, visiting the sick, visiting the prisoner and burying the dead. 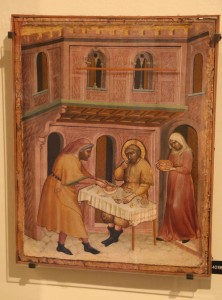 Olivuccio’s image of feeding the hungry depicts a man and a woman (likely married) providing food to another man. While the hungry man is seated at the table his hosts are standing, with one host cutting something to serve him while the other emerges from the house with another bowl of food. There is plenty of food on the table to feed all three but only the hungry man is pictured eating. To emphasize that this simple act of sharing food with someone who is hungry may, in fact, be a moment of feeding Jesus himself (as per Matt. 24:45), Olivuccio places a halo on the head of the hungry guest. To serve the hungry is to serve Jesus’ himself. This motif will continue through each of Olivuccio’s works of mercy.

To need food is to be human. Spiritual theologians have long noted that if you are going to make a list of the seven deadly sins from the least sinful to the most sinful, then you always place gluttony and lust at the top, as the least sinful. For example, in Dante’s hell you will enter the level of lust first and then gluttony, followed by the other deadly sins which are deeper in hell and therefore closer to Satan. Why is this? Because the drive to eat and to reproduce is natural. We are embodied and to be embodied is to (at least) need food and or desire to reproduce. Yet, because we are fallen, we tend to want too much food (gluttony) and desire too much sex (lust). It’s a problem and it’s a problem common to all human persons. Thus, to provide a hungry person with something to eat is simply to meet a basic human need. To feed someone from one’s own storehouse of food is to counter a tendency toward gluttony, for instead of keeping it all for myself I share it with someone else. 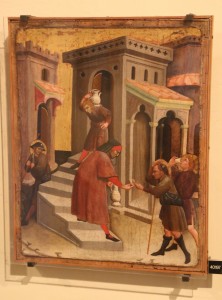 The same could be said for giving a drink to someone who is thirsty. Olivuccio’s depiction of this work of mercy shows a well-dressed man offering a cup of cold water to two pilgrims while a third pilgrim approaches from behind. Again, they are each haloed to demonstrate their connection to Jesus as per Matt. 25. While the well-dressed man offers the pilgrims water, his servant boy returns with another pitcher of water. There is clearly an abundance of water to be drunk just as there was in the feeding of the hungry plenty of food for everyone. Perhaps this gets at a rich theological truth: God provides in abundance. This, of course, does not negate the reality that in the Middle Ages (as now) there was not, in fact, always enough food for everyone but rather it focuses on God’s abundance, hence the expectation that those who have will share with those who have not. We feed the hungry and give drink to the thirsty because we are moved by our pity and awash in the blessings of God. We give to others because God first gave those things to us.

Furthermore, food is a recurring theme in the Scriptures so when we feed and give drink to others we see that we acting as God acts. God gave Adam and Eve all the food that they wanted but asked them to avoid one particular kind of food, not because it was bad food but because it was of the tree of the knowledge of Good and Evil (Gen. 3). At the feasts of Passover and Unleavened Bread God promised deliverance through a meal (Ex. 12-13). In their wilderness wanderings God sustained the Israelites through the daily food of manna (Ex. 16). And in the fullness of time God saved his people through the gift of the Bread of Life and Living Water — Jesus Christ, God’s own Son (John 6-7). Now, God continues to save and nourish his people through food; that is, the body and blood of his own Son in the Holy Eucharist (Matt. 26; 1 Cor. 11). Thus, in many ways, food is God’s gift to us and it is our salvation. To feed others and to offer them drink is to act as God acts. It is an offer of God’s salvation.

NB: The photos of Olivuccio’s paintings were taken by David Coonradt and used with permission.