C.S. Lewis once wrote a poem with the title Impenitence. What did he refuse to repent of? Man-like beasts. Anthropomorphic animals, especially the homey civilized ones from Beatrix Potter and Kenneth Grahame. Here are the first two stanzas of his poem:

All the world’s wiseacres in arms against them
Shan’t detach my heart for a single moment
From the man-like beasts of the earthy stories–
Badger or Moly.

Rat the oarsman, neat Mrs. Tiggy Winkle,
Benjamin, pert Nutkin, or (ages older)
Henryson’s shrill Mouse, or the Mice the Frogs once
Fought with in Homer.

There is a great literary lineage: Lewis names not just the moderns but also Robert Henryson’s fables, and even Homer. He could also have named Aesop, of course, and we could add Narnia, or the Lewis juvenilia published as Boxen. Richard Scarry’s busytown is also not to be despised.

The artist known as Freddy Age 12 has sketched out his fair share of animal societies, but in the last year or so he has devoted a lot of attention to a territory known as Owl Land. The sketchbooks are filling up, and the loose sheets are piling up, and it’s high time to share some of this material.

I don’t know much about Owl Land, but it’s some sort of constitutional monarchy whose citizens take pride in their traditions. Some of these drawings were made in England under the influence of a trip to the Tower of London.

Here we see owl workers preparing the crown jewels and other regal objects. A mix of miners and smiths here, setting the finest jewels:

Their work complete, a procession of nobles and guards bring the crown jewels to the king. Beside the throne is a real, but small, dragon.

…the procession continues, with the crown itself appearing.

A shot that stitches together both halves of the procession:

The king, in full regalia now, presides over a meeting of Parliment (sp?). Yes, it’s a Parliment of owls, apologies to Chaucer:

Their working day over, the whole crew hits the cafeteria. The guards are obviously modeled on Beefeaters, but they are in fact more likely to eat mice. One places his order while others wait in line, two are seated at table, and one more comes through the entry door. 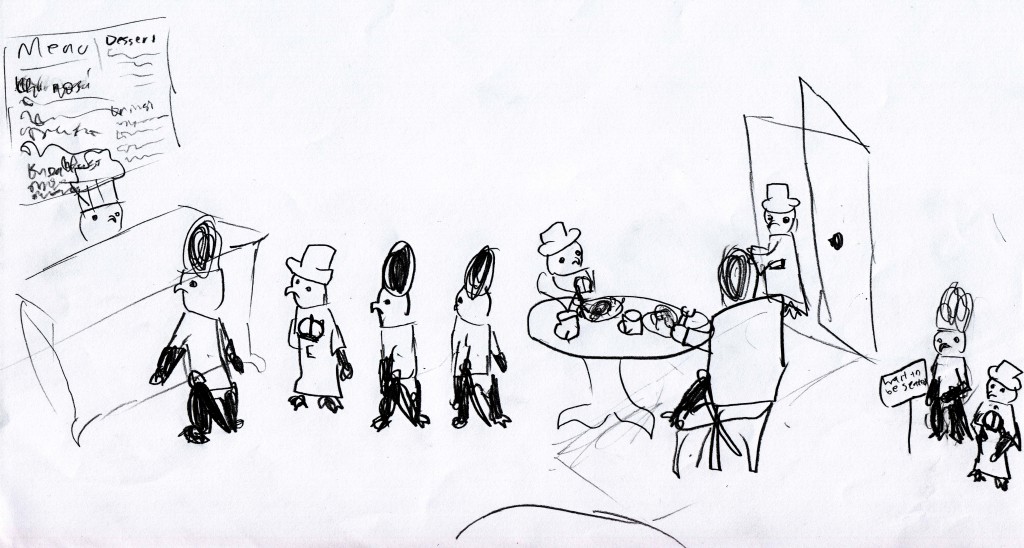 Meanwhile outside the palace, the mounted guards maintain their vigil. Horses in Owl Land tend to stick their tongues out a lot, and they might all be ponies judging from their proportions.

The king dines alone, and takes on himself the burden of choosing a meal from a comically long menu. As usual, he will end up ordering mice soup. 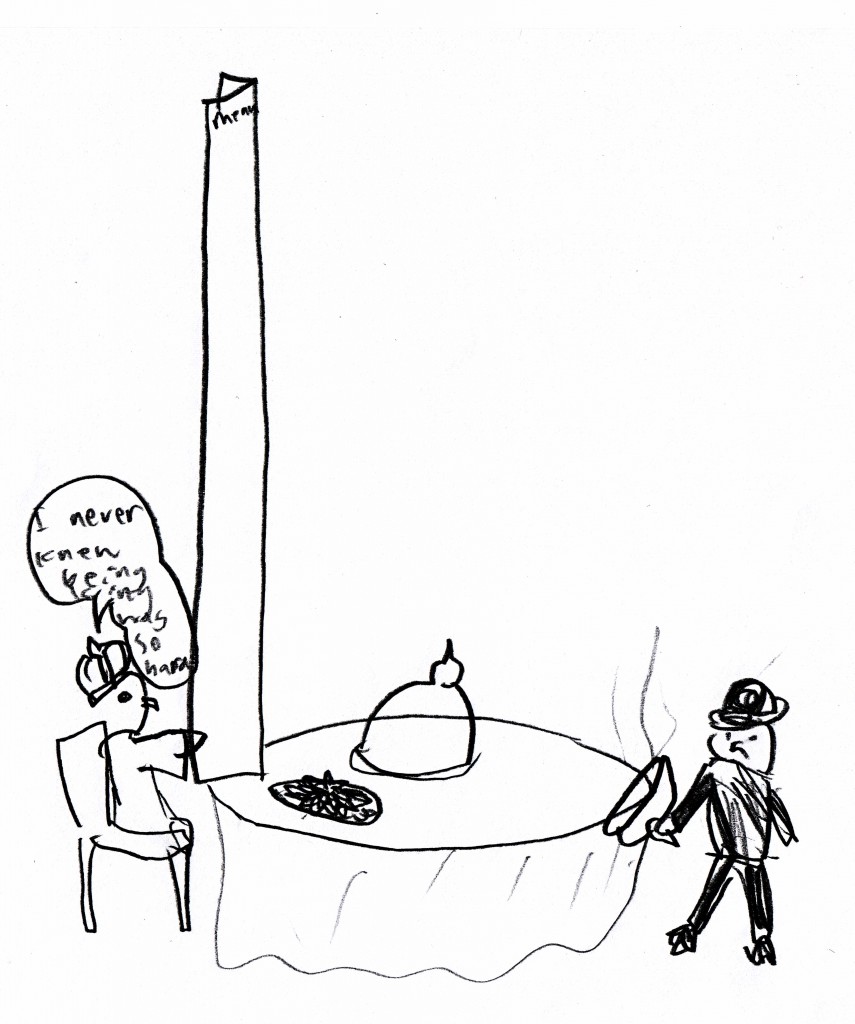 Owl Land has, oddly, no real air force. But the navy! 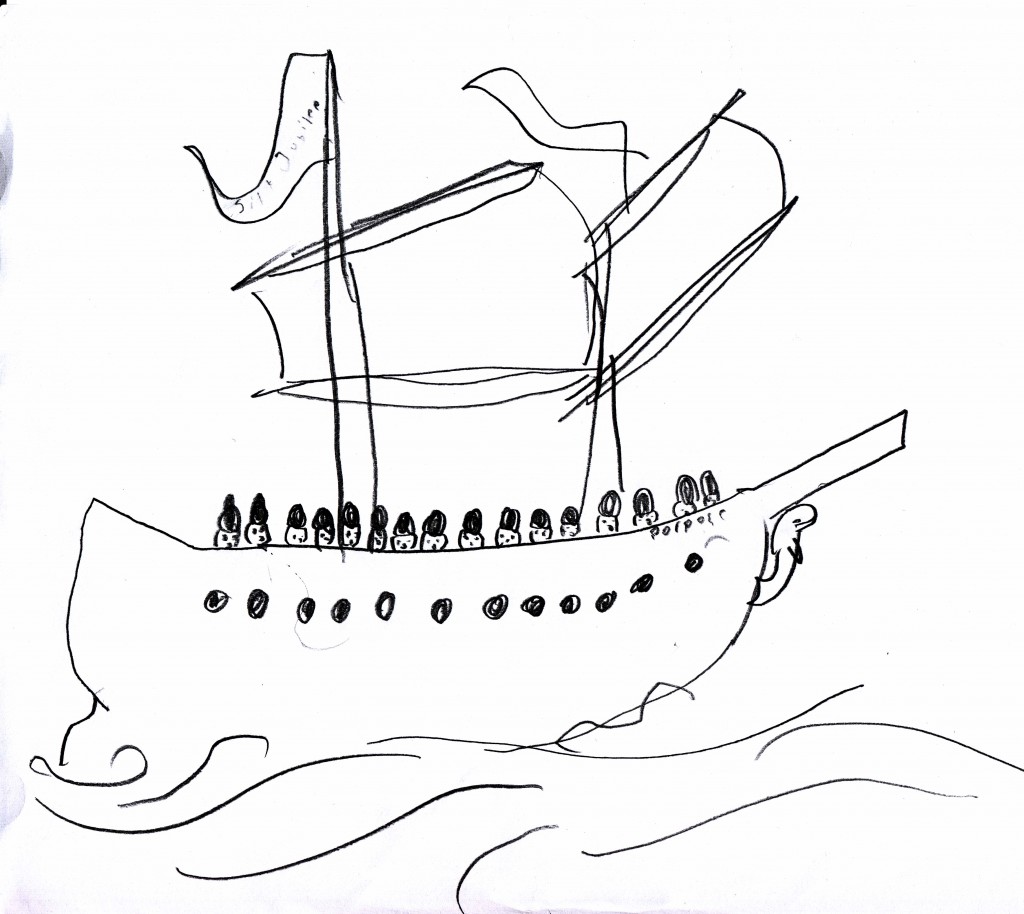 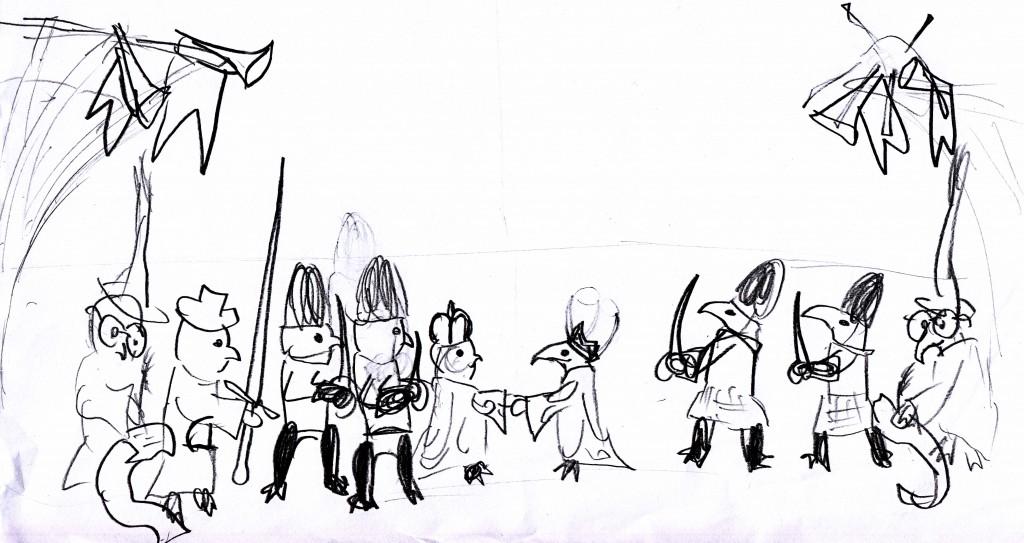 And a similar meeting with representatives from nearby Cat Land (guest drawn by Phoebe Age 10): 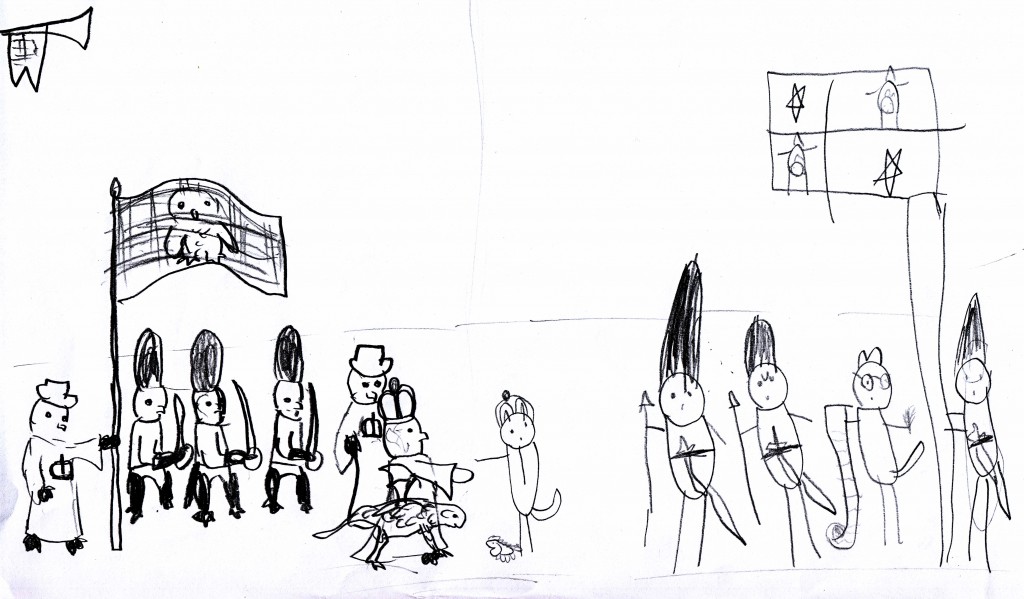 A vignette from the royal stables, where two beefeaters discuss yet another tongue-lolling pony. 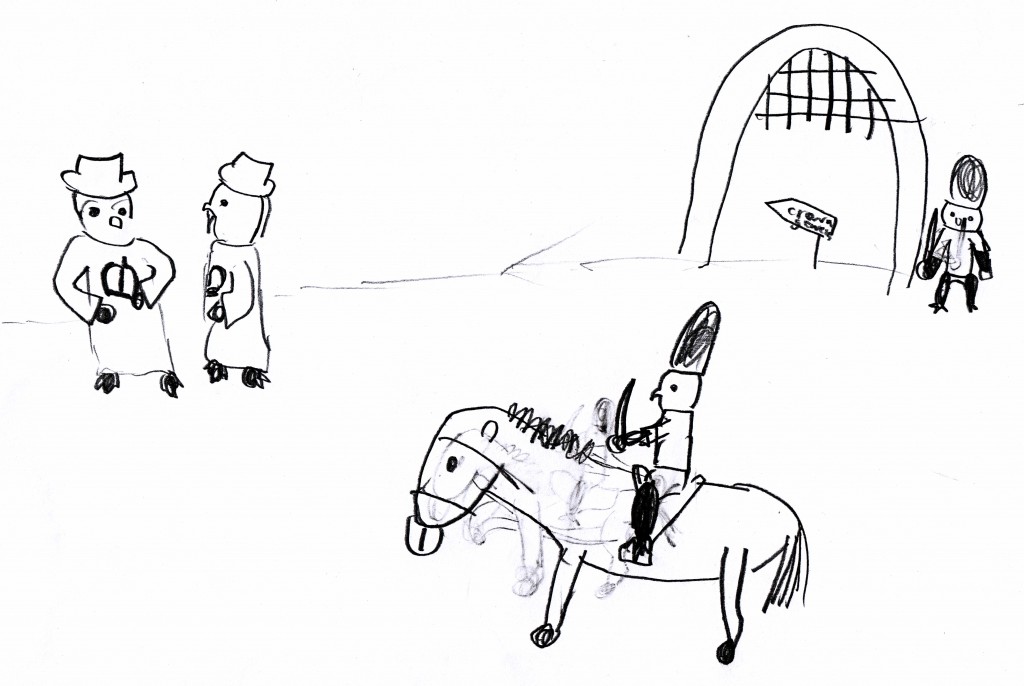 A curious collection of ceremonial swords on display. 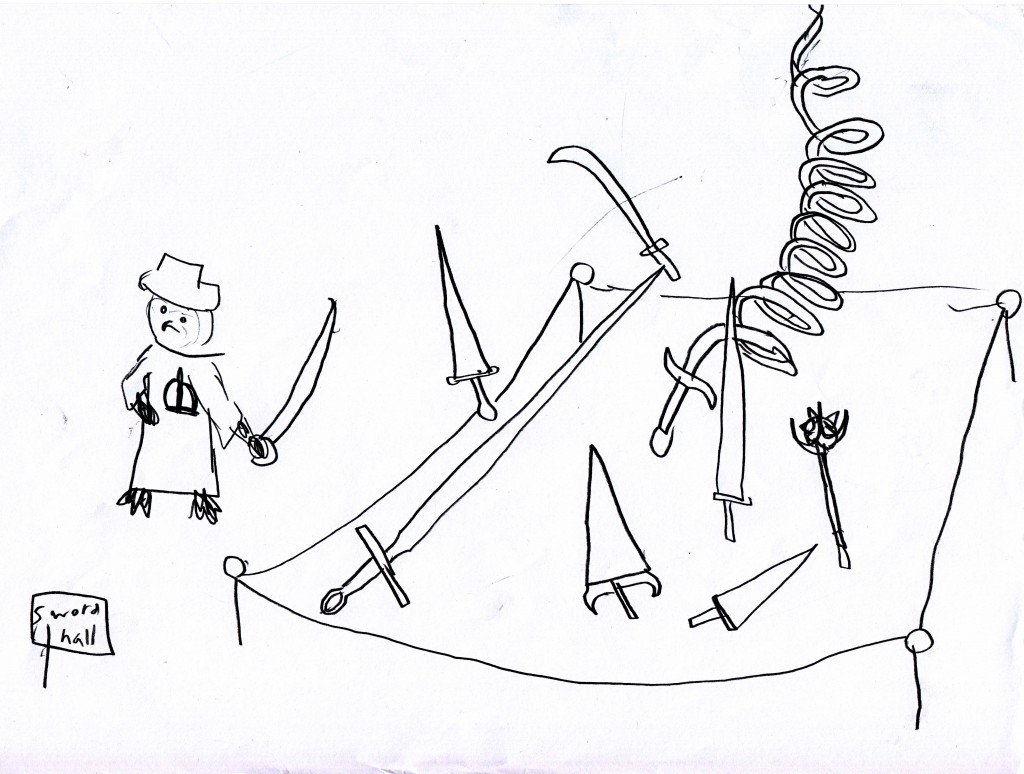 A guard fires the cannon: 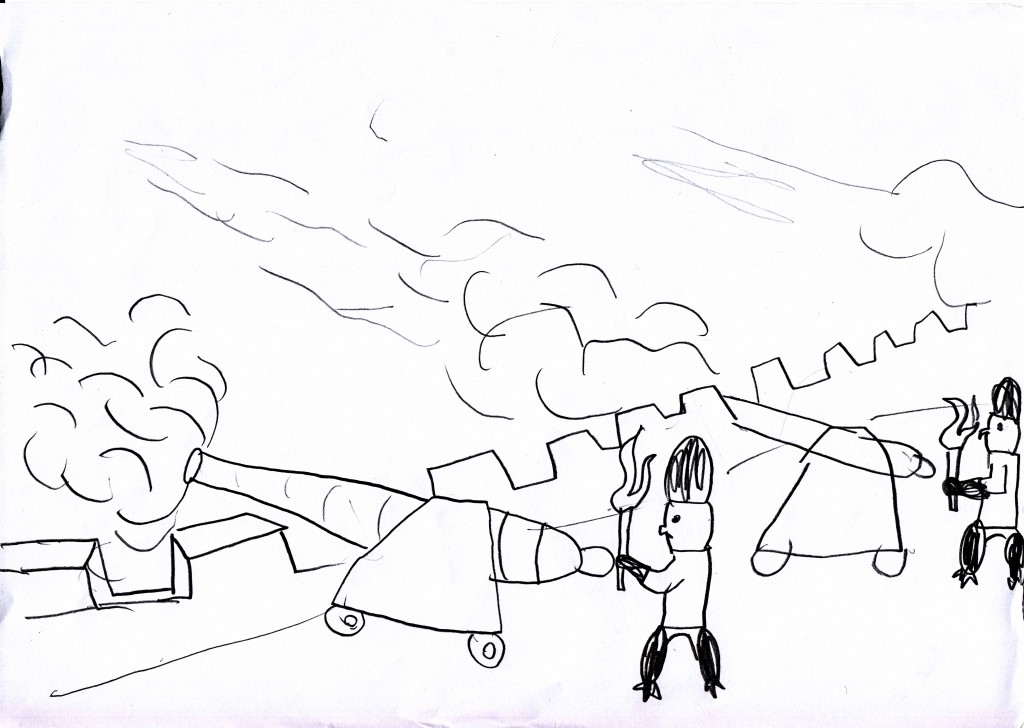 And finally, a leisurely stroll through the modern art museum. Seems to be something expressionistic on the right, and something rather minimalist on the left. 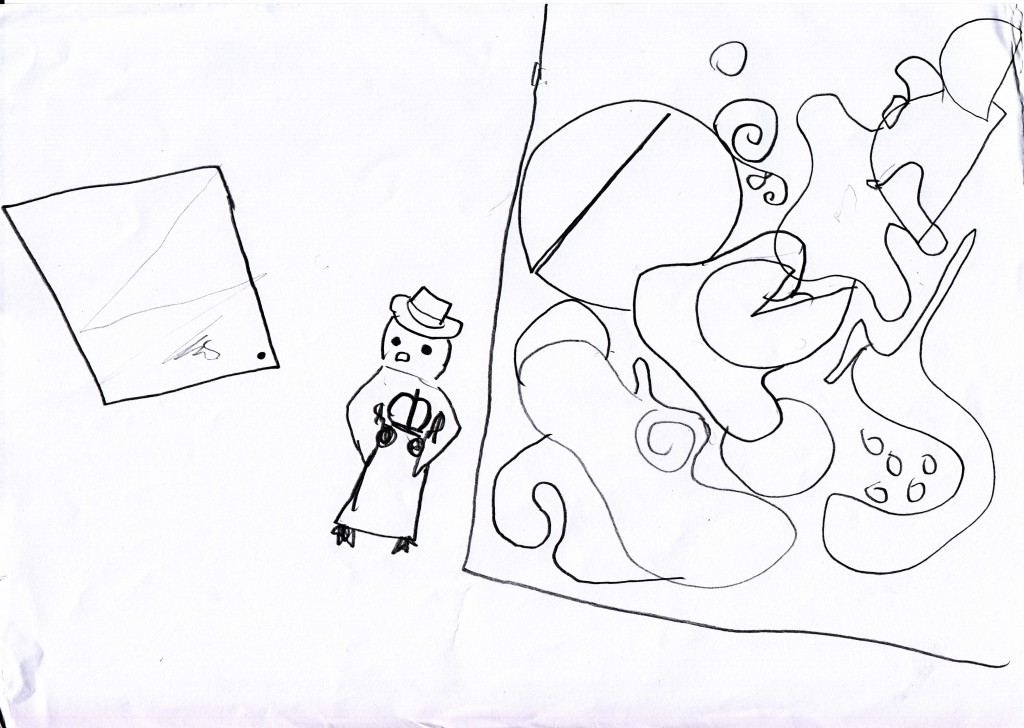