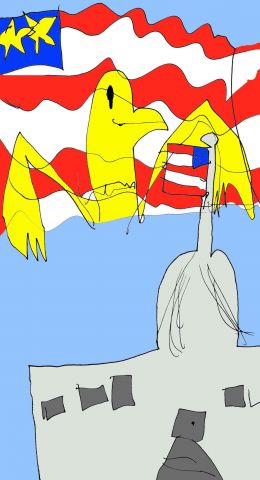 “It’s a grand old rag,” wrote Irving Berlin, but nobody wanted to sing it that way, so eventually he changed it to “grand old flag.”

Freddy Age Seven provides a 9/11 patriotic montage with a giant Star Spangled Banner waving in the sky –okay, so it’s spangled with exactly two stars, but you get the idea. In front of it is a giant golden eagle whose expression is joyous without being undignified. In the foreground is the U.S. Capitol, surmounted by a flagpole (not the statue that’s atop the real Capitol) and a flag blowing stiffly backwards.

The critical zone in this image is that little section where the small flag and the beak of the eagle nearly touch, against the backdrop of the large flag. This is a very sophisticated combination of images, expressing a sophisticated emotion: patriotic fondness for the homeland, in the tender years before solid conviction has been formed.

The original image is a ball-point pen sketch, and if you prefer the spareness of the drawing before it was digitally colorized, here it is: