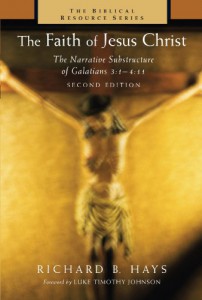 Richard Hays (from his 2001 intro to the 2nd ed. of Faith of Jesus Christ) gives some great advice on how to read Paul: “Paul, the missionary preacher, is at least as much a poet as he is a theologian.” And Hays doesn’t just mean in the mind-blowing passages like Romans 8 and 1 Corinthians 13. No, “throughout his writings, Paul’s language sparkles with the veiled energy of metaphor and allusion.”

Hays of course wrote the book about Paul’s allusiveness: Echoes of Scripture in the Letters of Paul. And this book, The Faith of Jesus Christ, is not mainly about how to translate a difficult genitive construct, but about (as the sub-title has it) The Narrative Substructure of Galatians 3:1-4:11. So Hays is all about echoes and substructures, allusiveness and veiled reference. There are two kinds of mis-interpreters: those who miss what’s there, and those who see what’s not there. Hays is never in danger of being the first kind. He wants “to free up our reading of the text, to make our reading more supple, more witty, and therefore more responsive to the character of the rich language that confronts us in the letter.”

On p. xxxiv of the intro, Hays just throws down a slab of Pauline language and marvels at it:

But for me, let me not boast, except in the cross of our Lord Jesus Christ, through whom the world is crucified to me and I to the world. For neither circumcision is anything, nor uncircumcision, but –new creation!

Hays doesn’t add much comment, and doesn’t do much explanation of echoes and substructures, he just gawks, points, and wonders aloud: “Can anyone seriously suppose that the best way to interpret the writings of an author capable of this astonishing riff is to paraphrase his ideas into univocal concepts?” Hays insists that, in addition to declaring truths and proposing beliefs, Paul is “constantly calling his readers to a conversion of the imagination.” And the conversion he calls the reader to (especially in Galatians, it seems to me),

entails not only the adoption of a new belief system but also learning to speak, pray, and sing the new confessional language summoned into existence by the gospel story.

One reason Hays is heavily invested (too heavily invested, I think, but that’s not my point) in translating the tough Greek phrase as “the faith of Jesus Christ” is that it points to the story that generates the argument. “It beckons us to ride the waves of signification unleashed by the impact of the cross. To speak this language is to be always alert to the possibilities of metaphor, typology, allusion, and polyvalence.”

Galatians has suffered from being read as a merely argumentative letter, written by a grumpy Paul who is more pugilist than preacher (“Here’s what I told Cephas, TO HIS FACE, and I’m tellin’ it to you, too. Hey! Are you listening?”). But try following Hays in seeing Paul as “at least as much a poet as he is a theologian,” and you’ll find Galatians to be astonishingly rich in artful disclosure of the truth, and in invention of imagery. That may account for why the book exploded with epochal power in the minds of people like Luther and Wesley, and why it can do so now for a reader who is given understanding.