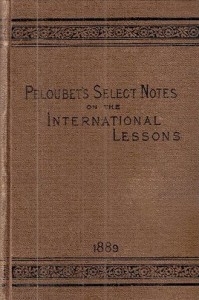 Francis Nathan Peloubet (1831-March 27, 1920) decided the most strategic thing he could do as a pastor was to train Sunday School teachers how to teach the Bible to their students well. So he travelled and lectured, wrote books and articles about it, and networked inter-denominationally to support the Sunday School movement any way he could. But mostly he published Notes: Peloubet’s Select Notes on the International Lessons.

Sometime in the 1870s, an international coalition of Protestant churches established a committee to publish a standard lesson schedule that all the churches could follow. These International Standard Sunday School Lessons meant that all over the English-speaking world, Sunday School teachers who were thinking about next week’s lesson were all thinking about the same passage of Scripture at the same time, and wondering how to teach it to children of different ages. Many authors and publishers rushed to help this vast new market of Bible students, but it was F. N. Peloubet who established his notes as the most trustworthy and useful notes. Scriptorium’s own R. A. Torrey published his own long-running, very successful set of helps as well, but Peloubet stayed perched at the top of the market. Peloubet and his wife kept publishing those notes right up until his death, running to about 45 annual volumes. After he died, they kept going, edited for many years by Wilbur M. Smith of Moody and Fuller Seminary fame.

As for Peloubet, a Congregational pastor, he considered Sunday Schools to be the vanguard of Christian work. He said that there was a special delight in shepherding “the lambs of the flock,” and that any attentive pastor would soon find that “by learning how to shepherd the lambs he learns how to shepherd the whole flock.” Speaking personally, he said, “as I now look back over my uneventful life, more and more clearly does the Sunday School Work flow throughout its whole length like a river of light.”

Peloubet was a man of the nineteenth century who kept up his work for two decades of the twentieth. The ground was shifting under his feet, and though he always paid close attention to the tremors, he did not seem to understand what the subterranean noises signified, or just how much the geography of Christendom was going to be rearranged in the twentieth century. All through his lifetime, the movement of critical historical Biblical scholarship known then as “the Higher Criticism” was becoming more self-assured in its methods and results. Peloubet thought Sunday School teachers should stay abreast of these findings, at least as they were made available at a popular level. What these discussions would change about a Sunday School lesson might be minimal: Don’t call Moses the author of the Pentateuch, handle the second half of Isaiah differently, avoid some subjects altogether if the historical critics had found it uncertain. Peloubet was always careful to express caution regarding “some of the more extreme findings” of the critics, but overall he was eager to commend an optimistic outlook toward all their work: “To me the new emphasis on the Historic method has been a real blessing. The words and messages receive a new meaning from their historic setting. The books of the prophets have a new meaning when we read them not as isolated themes, but as sermons and orations spoken in times of great need in order to accomplish great purposes.” This is a rosy view of what biblical criticism circa 1900 was offering as its assured results, to say the least.

Given a choice between a critic who went a little too far, or a conservative believer who was phobic about the very existence of the higher criticism, Peloubet manifestly preferred the former and considered it his job to educate the latter. Increasingly through the years, he undertook to fore-warn and fore-arm his Sunday School teachers against literalism, obscurantism, anti-intellectualism, and what would soon be called fundamentalism. The approach he recommended was to learn from all the higher critics (while of course recusing oneself from their more radical theories), but to teach the children how to be good and to love God. “The Sunday School teacher should dwell in the atmosphere of the devotional, character-forming, life- guiding elements of the Scripture. All teachers, higher critics or not, advocate this.” Mostly, Peloubet didn’t want to fight, he wanted to teach the big ideas of the Bible at the Sunday School level. But if there was to be a fight, he would certainly take his stand on the side of the intellectual freedom of the critics.

And of course there was a fight; the fundamentalist-modernist fight that rocked most of the denominations Peloubet was most popular with. He remained popular, and genuinely helpful, right up to his death. In his final years, he had a ringside seat for the great revolt of the populist pews against the progressive pulpit. As fundamentalism found its voice and started building its new institutions, Peloubet’s Notes came under occasional suspicion: Was he a liberal, was he too soft on liberals, were his notes too naive about the real tendency of the critical literature? But the Notes, so well established and so full of good, basic exposition and factual information, kept their hold on the hearts of most fundamentalist churches who needed Sunday School training. Peloubet found his niche and did decades of good work, and they were the right decades. His compromises, facile peace-making, and gullibility about the aims of higher criticism would not have weathered the 1920s and 1930s very well. But he kept to a steady course for as long as he had, and the arc of his life-work had its own integrity in difficult times.