The anonymous preacher of Ecclesiastes once said, “Of making many books there is no end…” and I bet he’s right. As long as there are readers there will always be books, and not just old books but new ones too. Sometimes, however, new books are about old topics, thus helping to make something old new again. With the impending release of my first book I am trying to make someone who is old new again.

His name is Peter of Damascus and he’s not well known at all, though this is mostly a recent omission. Well, “recent” if you think in centuries instead of years. Peter was a Byzantine monk in the twelfth century who bequeathed a modest but fascinating literary corpus to posterity. It would appear that what he had to say was interesting enough to those who followed after him because there are over a hundred manuscripts that contain portions of his works. By today’s standard a run of 100 books is not all that impressive but not bad for a monk from Greece whose texts had to be copied by hand. It would also appear that Peter became somewhat of an international author since his works appear in Slavonic and Russian translations dating back to at least the fourteenth century. In 1782 the world was given another chance to learn about Peter when two Greek monks, Nicodemus of the Holy Mountain (i.e., Mount Athos) and Macarius of Corinth, decided to include Peter’s two major spiritual works in an anthology of texts that they called the Philokalia. This collection of Greek texts was published in Venice and became a well-known and well-used collection of spiritual wisdom. To make the Philokalia accessible to more people, a Ukrainian monk named Paisy Velichkovsky translated the Philokalia into Slavonic in the 1790s. Finally, yet another monk named Juvenalii translated Peter’s two spiritual texts into modern Russian in 1874. You would think from all this that Peter would have been well-read, at least by monks, nuns and other spiritually-minded persons; and he was! For instance,

While I was walking alone with two brothers… we came straight to the very high hill of the Holy Prophet Elias… Under this hill, on a very high place on the side toward the sea, there is the Skete of St. Basil the Great… And so we came to this Skete and sat down near the holy church, and a monk of reverent appearance saw us… [and] he invited us with love into his cell and went out to prepare some food for us in order to refresh us from the labor of walking. Looking at a little table which was near the window, I saw an opened book lying on it, from which he was making a copy, for by craft he was a calligrapher, and looking closely at this book I saw that it was the book of St. Peter Damascene, and seeing it I cannot express with what unutterable spiritual joy I was filled; for I thought that I had been enabled to see a heavenly treasure upon earth. When the brother returned to the cell, I began to ask him with great joy and unutterable astonishment, how it was that such a book, beyond all my hopes, was to be found in this holy place.
Having heard this and rejoiced greatly with unutterable joy at obtaining such a heavenly treasure upon earth, I began to entreat him fervently, for the love of God, to copy such books for me also, promising to give for the labor whatever price he might want. But he, having much to copy, refused, and led me to another calligrapher who was living in the same Skete; and him I likewise entreated with great fervor to copy the patristic books for me, promising to give him triple the price for the labor; and he, for the love of God, seeing my great desire to acquire such books, did not want triple the price, but for the ordinary price promised me, even though he himself had much to copy, to copy for me a part of such books, as much as he could and as God helped him. And thus, for the two years and a little more before our departure from the Holy Mountain, this calligrapher, setting to work, copied for me a certain part of the much-desired books….”

Yet, scholars, for whatever reasons, chose to ignore Peter. Other than a couple of encyclopedia articles written about him in Russian in the late-nineteenth and early-twentieth centuries, only one scholar took up the task of investigating Peter. Jean Gouillard’s study was published in French in 1939 and it wasn’t very flattering. Gouillard was unimpressed by Peter. I am unimpressed by Gouillard. Seeing a neglected Byzantine spiritual author before me I took up the challenge and wrote about him.

The fruits of that labor have become Peter of Damascus: Byzantine Monk and Spiritual Theologian, published by the Pontifical Institute for Mediaeval Studies. Be warned: this is a full bore academic book, which will not necessarily make for an easy afternoon of reading. But it is a book about a God-fearing man who thought that his insights into the spiritual life were worth recording. Many Christians who have come before us have agreed with Peter. Perhaps you too will take up the book and read and discover that sometimes what is old is new again. Perhaps, like me, you too will resonate with Peter’s spiritual theology, leading you to actually read his works in the Philokalia (already available in English). I think you will find him quite engaging. I certainly have. 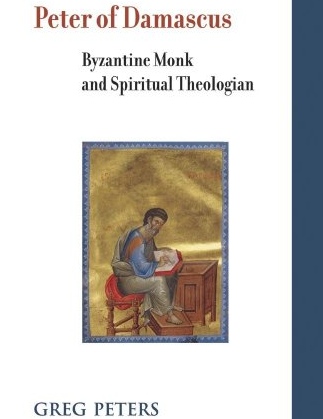