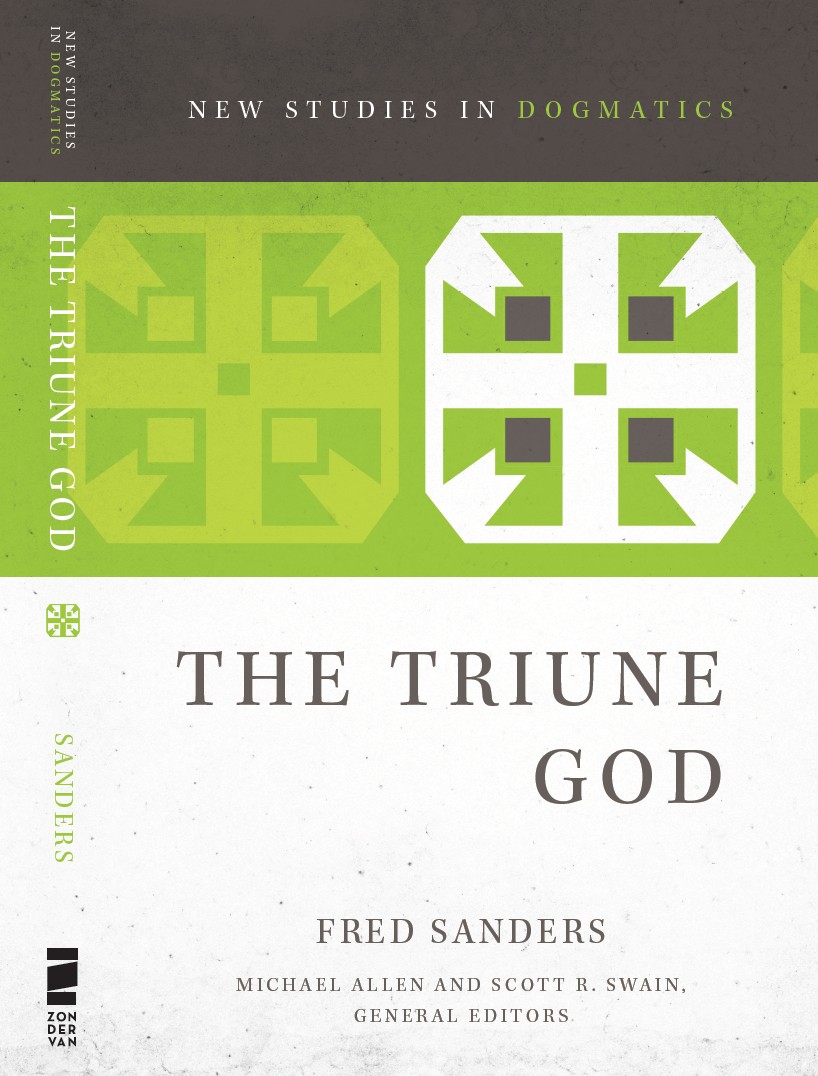 I messed up footnote number eight on page 27 of my 2016 book The Triune God.

It’s a little more interesting than it sounds.

In the form of simple gratitude, praise may terminate provisionally on proximate blessings, but is always on a trajectory past the gifts, toward the giver. When the source of the divine giver’s largesse is his own inner plenitude, biblical praise is restless until it finds fulfillment in the spiritual gesture indicating that eternal depth. All theology…is marked by its doxological provenance and orientation.

This is true not merely in the sense of Hermann Bavinck’s admonition that ‘theology is about God and should reflect a doxological tone that glorifies him,’ but in a more constitutive sense as well. Theology is not itself if it is not also praise.

And right after the Bavinck quote, I tag on a footnote to “Herman Bavinck, Prolegomena, vol. 1 of Reformed Dogmatics (Grand Rapids: Baker Academic, 2003), 61.”

But if you look at Bavinck’s Reformed Dogmatics vol. 1, you’ll see that the sentence I quote is in the funky italic text block, just above where the normal text starts. 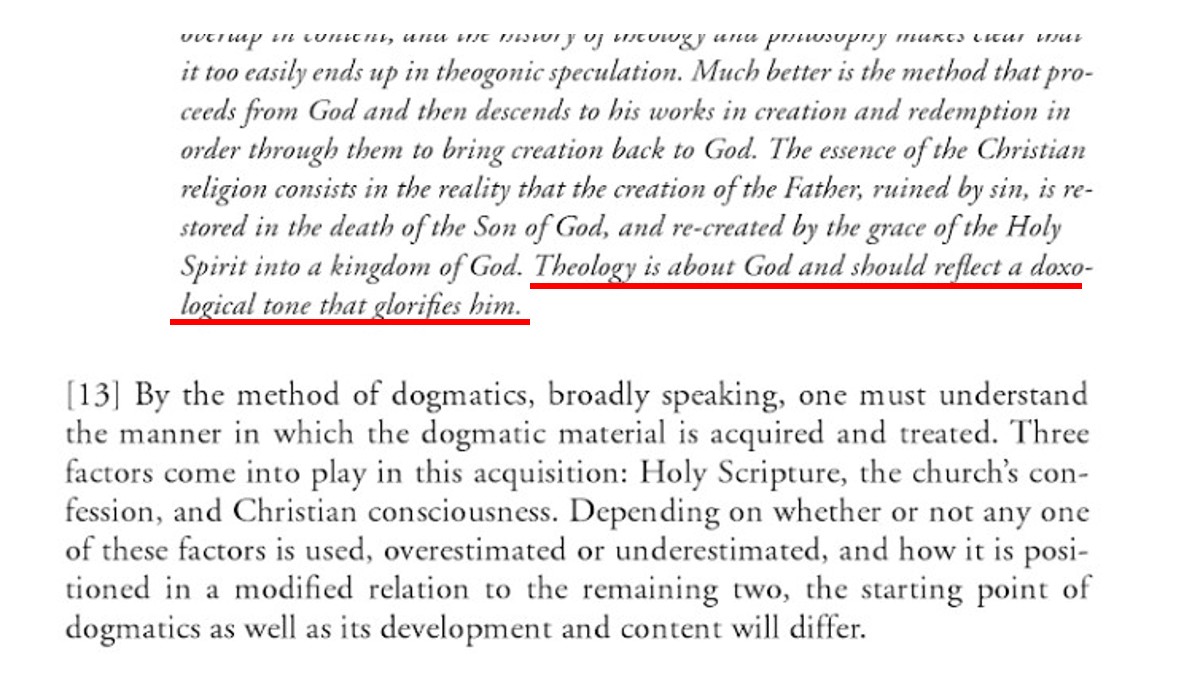 Friends, that footnote is a Rookie Bavinck-Quoting Mistake.

As the editorial introduction to Reformed Dogmatics volume 1 says,

The headings subdividing each chapter are new. These, along with the chapter synopses, which are also not in the original, have been supplied by the editor. All Bavinck’s original footnotes have been retained and brought up to contemporary bibliographic standards. Additional notes added by the editor are clearly marked. (p. 21)

Now, I could pretend I knew it was an editorial synopsis, that I was using it to make a point about the whole chapter, and that my point still stands. Or I could complain about the page design of the RD (I was going to say the ET of the RD, but the Dutch RD would be the GD so that wouldn’t make sense) or about how odd it is to have such large synopsis paragraphs sprinkled through the book, but the fact is, anybody who’s used the RD for a while ought to know better than to attribute the synopses to Bavinck himself. I mean, the tone of voice is not even the same. Or I could plead that back when I went to grad school we didn’t have all this fancy-schmancy Bavinck in English that kids these days take for granted. BACK IN MY DAY WE HAD TO READ THOUSANDS OF PAGES OF BARTH AND JUST FILTER OUT THE REALLY WEIRD STUFF OURSELVES, so I’m always playing catch-up in these heady latter days of Bavinck’s Englishness.

Oh wait, that last part was the true part.

So yes, mistakes were made. I put a sticky note on that page back when I read through it, and then when I went back to it for a reference, just jumping in rather than reading through, I forgot I was looking at synopsis.

Apologies to the international Bavinck community for the blunder.

Speaking of the international Bavinck community, they notified me of my error. Well, at least Cameron Clausing, working on a PhD at Edinburgh on Bavinck’s trinitarianism, wrote to me to ask what was going on there.

In particular, since I use the Bavinck pseudo-quote mainly to set up my further point (“you have heard that Bavinck says theology should have doxological tone, but I say to you that it should be doxologically structured”), Cameron was interested to see if I could recognize that my own concerns were already represented in Bavinck’s actual text. In particular, he pointed to this text in RD, which the synopsis was probably attempting to paraphrase:

Dogmatics shows us God, who is all-sufficient in himself, nevertheless glorifies himself in his creation, which, even when it is torn apart by sin, is gathered up again in Christ (Eph. 1:10). It describes for us God, always God, from beginning to end—God in his being, God in his creation, God against sin, God in Christ, God breaking down all resistance through the Holy Spirit and guiding the whole of creation back to the objective he decreed for it: the glory of his name. Dogmatics, therefore, is not a dull and arid science. It is a theodicy, a doxology to all God’s virtues and perfections, a hymn of adoration and thanksgiving, a ‘glory to God in the highest’ (Luke 2:14). (p. 112)

That is indeed a strong statement of the work of theology as praise. So yes, Bavinck has a deeper sense of theology as doxology than the rather weak “reflect a doxological tone that glorifies” summary provided by the editors. In the quotation Cameron points to (above), he makes it clear that what God carries out is a self-glorification through his own works, and to the extent that theology confesses those works, it participates in the glorification of God and is thus a doxology. He could have said more about this in this context, but I’m willing to bet his way of handling all the other doctrines could also bear it out.

I’ve take a little bit of critique from some theological friends for claiming that theology is itself a form of praise. They would like to maintain a stronger line between the primary actions of the church and the secondary or reflex action of theology, or at least to recognize that there is a difference between saying “God, you are great” (praise) and “God, he is great” (theology). So when I make the claim that theology is praise, it’s not something uncontroversial to claim. If I undertake to defend it again, I may well lay hold of some Bavinckian resources.

In the ensuing e-mail exchange with Cameron, I pointed out that in an essay about modern trinitarianism (in Mapping Modern Theology), I had used Bavinck as an example of vibrant trinitarianism during the period when there supposedly wasn’t any; that is, I view him as counter-evidence to the whole narrative of a trinitarian decline.

Cameron reminded me, as corroborating evidence, of this statement from Bavinck on the centrality of the doctrine of the Trinity:

The thinking mind situates the doctrine of the Trinity squarely amid the full-orbed life of nature and humanity. A Christian’s confession is not an island in the ocean but a high mountaintop from which the whole of creation can be surveyed. And it is the task of Christian theologians to present clearly the connectedness of God’s revelation with, and its significance for, all of life. The Christian mind remains unsatisfied until all of existence is referred back to the triune God, and until the confession of God’s Trinity functions at the center of our thought and life.

Listen to a modern theologian, to Bavinck, whose presentation of the Trinity is in itself one of the most careful and instructive that I know. He tells us that the whole of Christianity stands or falls with the doctrine of the Trinity, the whole of special revelation. It is the core of the Christian faith, the root of all dogmas, the substance of the new covenant.

So, much to celebrate about theology as the praise of the triune God.

Speaking of Bavinck and praise, Cameron Clausing is one of the translators and editors of the new edition of Bavinck’s Sacrifice of Praise that is scheduled for a June 2019 release. Watch for it.