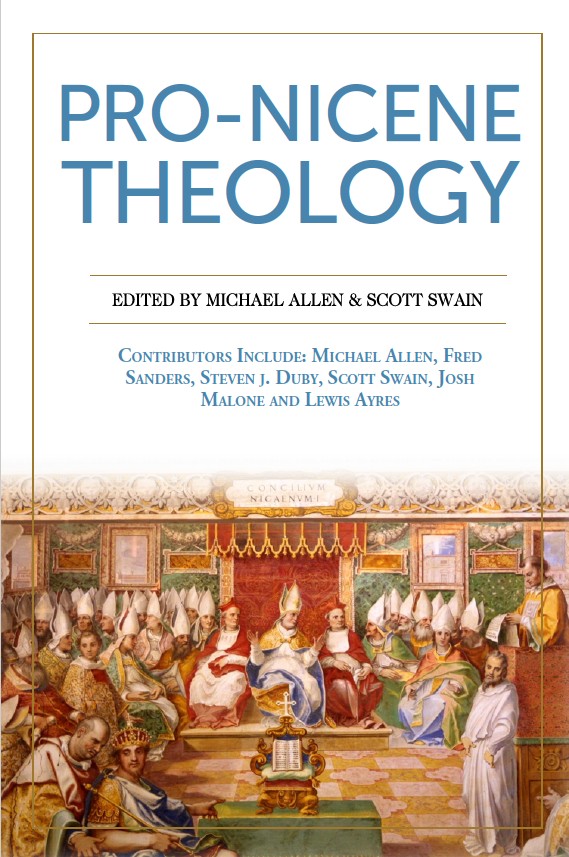 Long story: In late 2016, Mike Allen and Scott Swain edited a blog series at Zondervan’s Common Places devoted to Pro-Nicene Theology. Pro-Nicene theology is trinitarianism, of course, but it’s not just the doctrine of the Trinity narrowly considered. To talk about pro-Nicene theology is to draw out some of the conceptual tools in the intellectual culture without which trinitarianism would not have been formulated and cannot thrive now. Chief among these tools are the doctrines of divine ineffability and simplicity, the inseparability of trinitarian operations ad extra, the doctrine of the Son’s eternal generation, and the distinction between theologia and oikonomia.

Of course you can read the whole blog series online at the original site, but Zondervan has also edited them together in pdf form as a 51-page e-book. Just click through (link or pic above) and tell them where to e-mail it, and you’ll get the pdf.

That’s 11 chapters by 6 authors, a little mini-book of roughly 12,000 words. About half of those words are by me, because I got to play the role of giving exegetical reflections in response to each of the theological entries. With scholars like Allen, Swain, Duby, Malone, and Ayres, I was frequently scampering to keep up with their erudition. It was good work by each of them and a good workout for me.

From my point of view, the whole project is an extension of the work I did in The Triune God, of offering dogmatic guidelines for theological exegesis. The Triune God had been written but not published when these blog posts appeared. So my contribution to this little Pro-Nicene Theology book is a parergon to Triune God. I’ve always wanted to write a parergon. Heck, I’ve always wanted to use the word parergon, and now I have.