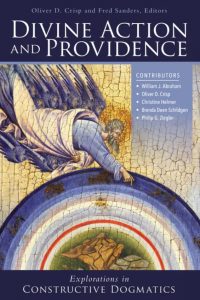 Here’s a new book with eleven essays on Divine Action and Providence. As co-editor of the collection, I do hereby commend it for your consideration. I don’t know of another recent book that would serve so well as an introduction to the theology of providence.

The opening two chapters by Oliver Crisp and William Abraham deliver a strong introduction to this topic. Both authors are theologians with the scope to survey a very wide region of the doctrinal landscape, and both are philosophers who write with analytic clarity.

Oliver Crisp is forthright in commending and defending a doctrine of meticulous providence, but in this chapter he doesn’t pick one single version to defend. Instead, he explores, in turn, two different ways of holding to meticulous providence: a secondary cause account and a concurrence account. Either one, he argues, could work, which shows that “there are…several different ways to be a defender of meticulous providence.” The advantage of staying at this higher level of analysis is that this chapter can be helpful to theologians with different, even conflicting, metaphysical accounts of divine action in the world. It’s an auspicious way to start a book that contains a range of views.

Billy Abraham‘s chapter starts with a riveting, high-stakes story of somebody’s pants exploding into a fireball in answer to prayer. I can’t think of any other essays in philosophical theology about which I can say the same. When Abraham told this story at the 2019 L.A. Theology Conference, it brought the house down. Here in the chapter, the story serves as grist for philosophical analysis, “a case of particular and special providence.” Abraham is in the middle of a four-volume analysis of divine agency from Oxford University Press; this chapter is a great, brief introduction to his case for taking seriously the way the Bible and ordinary believers speak of God as an agent. Abraham is not shy of doing the careful, philosophical work that would justify this way of speaking and thinking about God.

Chapter 3:  Julián Gutiérrez retrieves Puritan theologian Stephen Charnock’s doctrine of providence. The payoff of listening to this seventeenth-century voice is great: Charnock gave more attention to theology proper, to the agent of providence, than our modern intellectual habits tend to encourage. Hence his chapter title, “Who is this King of Glory? Recovering the Identity of the God of Providence.” Gutiérrez is a Colombian theologian who explored Charnock’s doctrine of God in a 2017 St. Andrews dissertation, so this chapter has a lot behind it.

Chapter 4: Christine Helmer is against providence, and makes the case for why you should be too. Her sharp argumentation, her critical reading of the cultural production of theologies of history, and her appeal to Luther’s account of the hidden God combine to make this chapter a striking intervention into the current discussion. For those of us who think the truth about providence must lie somewhere between Crisp and Abraham if we could just work out the details responsibly, Helmer throws the questions into sharp relief. I predict this chapter will make the whole book more useful for class discussion.

Chapter 5: Nathaniel Gray Sutanto, who has co-edited the very recent publication of Herman Bavinck’s Christian Worldview (as well as 2018’s Philosophy of Revelation), here draws out an application of Bavinck’s public theology. The Christian doctrine of providence (which Sutanto elegantly draws out of the Reformed Dogmatics) supports Christian intellectual inquiry into any discipline.

Chapter 6: W. Ross Hastings uses resources from Barth to argue for concursus between divine and created agents, while emphasizing that the concursus is asymmetric: divine freedom has primacy, but does not eclipse human action. This has ramifications for Christology and anthropology.

Chapter 7: Meet Brenda Deen Schildgen, Professor Emerita of Comp Lit at UC Davis. I say “meet” because while Schildgen is a real luminary in comparative literature, I’m guessing that not many people buying systematic theology books are likely to have read her work –not even her 2014 monograph exploring the history of the idea. This chapter doesn’t make the mistake of trying to cram that whole history into 20 pages. It’s much more focused than that. But page for page, this is the chapter most likely to teach you new things.

Chapter 8: R. David Nelson obviously appreciates the apocalyptic turn in recent theology and biblical studies, but he puts a hard question to it in his esssay “Old and New Actions of God.” The goal is to be able to confess what’s new in God’s actions, without losing the continuity with what God has done before.

Chapter 9: Philip Ziegler is evidently working on a large-scale project about the devil, and this chapter takes up the question of how a Christian doctrine of divine action can say the right things about “the devil’s work.” You wouldn’t necessarily expect a chapter on the devil in a book on providence, but once Ziegler lays out the “three-agent drama” of a historical and pragmatic account of providence, it’s obvious why it matters.

Chapter 10: Jonathan Hill explores the idea of occasionalism, according to which God (and God alone) causes everything that happens. Hill’s clear survey of strong and weak versions of occasionalism is valuable in its own right, especially for those needing an introduction to the issues. But for those who are already up to speed, he goes further with recommendations of a way forward.

Chapter 11: David Efird and David Worsley put divine action into the context of the beatific vision. Besides being an elegantly eschatological  way to end a volume, their discussion shows that accounts of providence need to bear final causes in mind consistently.

This volume is not quite a comprehensive survey of all the live approaches and hot issues in the doctrine of providence, but it’s pretty close. The range of voices and of schools of thought represented makes for a satisfying study; readers who grasp what’s happening in these chapters will have a pretty good idea of what’s going on in recent theology. In part that’s because the book is volume 7 in a series of published proceedings from the Los Angeles Theology Conference, a conference which tries to bring together the best contemporary theology for a two-day gathering every January in southern California. The conference is ongoing (the 2020 theme is pneumatology, and the location is Biola University), even though co-founder and co-planner Oliver Crisp will have to make the rather extreme commute from Scotland from now on.