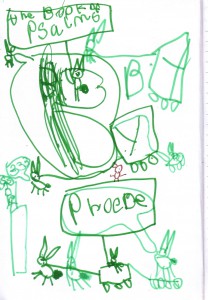 I don’t know what other families do for devotions, but at my house we are cartooning our way through the book of Psalms. With world-famous artists like Freddy Age Ten and Phoebe Age Eight living under the same roof, it’s an opportunity not to be missed.

The Psalms are a uniquely appropriate book for the visual imagination. An insightful book by William P. Brown, Seeing the Psalms: A Theology of Metaphor points out that the Psalms let us have word and image together: “Attending to the text’s formfulness and linguistic background (i.e. genre, structure, and verbal nuances) does not require neglecting the role that images play in conveying the text’s meaning.” Brown picks out a handful of master metaphors that convey meaning in the Psalms: Refuge (including shadow and shelter), pathway, tree, sun and light, waters, animals, and the human anatomy. Drawing out these poetic images and making them cartoony visual images is a powerful way into the message of the Psalms.

Here is an example of the benefits, from the first day we sat down to try some psalmtooning. Phoebe Age Eight (actually Phoebe Age Seven back then) listened to Psalm 1 a couple of times through: “Blessed is the man who walks not in the counsel of the wicked…” She then talked it over with us, and proceeded to draw the following page: 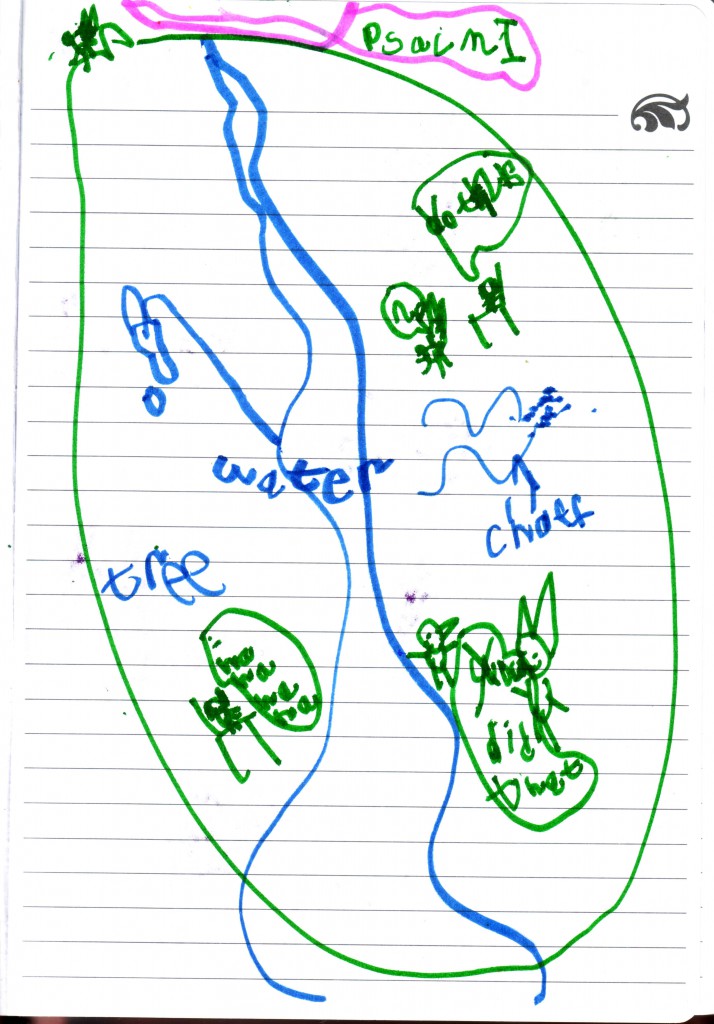 The first thing to notice is that the entire page is well composed as a unit. A large green loop of a line has lassoed the various images that fill up the page; this pulls the image together nicely.

Phoebe Age Seven has also established a strong vertical axis by extending the blue river right through the middle of the page. Look to where it begins at the topmost point, and you will see that the blue lines end tidily right where they would have crossed the green circle. This effect creates a number of interpretive possibilities: Suddenly the green line might be the distant horizon, or (since it is curved) the summit of a hill, or (since it is round) the globe of the earth.

The vanishing-point effect is made even stronger by the way the undulating blue lines of the river burst through the green boundary at the bottom of the page. With the blue line, the artist has used the flat edge of the marker to powerful effect: the river lines have a dramatic variation in line width as they flow downward. The green line, on the other hand, is quite uniform in thickness, having been drawn entirely with the marker’s tip.

In short, there is a complex interaction between the blue vertical axis and the green containing circle.

Inside that circle are a number of miniature studies. These include (in blue ink) the word “tree,” which the righteous man is like, and the word “chaff,” which the wicked is like. The tree is not represented, but the chaff is shown as a set of dots driven on by wavy lines signifying wind. 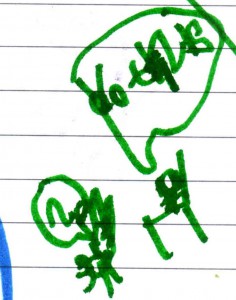 But the major interest inside the circle is the set of three figure studies, loosely distributed around the area. Topmost is this one: Blessed is the man who “does not walk in the counsel of the wicked.” Phoebe Age Seven represents this notion with a picture of a (tiny) wicked person, perhaps a mouse, in a chair commanding: “Do this.” The righteous cat in front of the chair replies, “no.” That is a blessed cat, not walking in the counsel of the wicked.
.
.
.
. 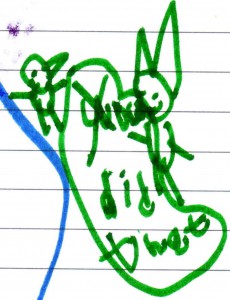 The next image, immediately below that one, illustrates the brief phrase, “nor stands in the way of sinners.” It features a small bird confronting a rabbit or cat, saying “you did that.” Nobody has any idea what this means, and the artist won’t tell. But the mood of defiance is clear.
.
.
.
.
.
.
.
.
. 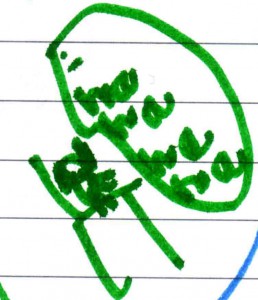 Immediately across the river is an easier character to recognize: A very small dog is sitting in a chair saying “ha ha ha ha.” Obviously the seat of the scoffer. In the version presented here by Phoebe Age Seven, the righteous aren’t even around to hear it. They know to move on.
.
.
.
.
.
.
But the crowning touch of this first psalmtoon is the blue line that arcs up out of the water on the left. It is a blue hand, and it is pushing a blue seed into the soil. I only know this because I asked the artist. 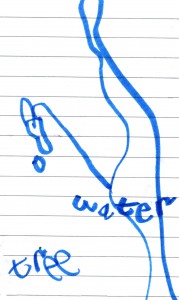 When I followed up with the question, “Where does the first Psalm talk about planting seeds,” Phoebe answered: “When it says the righteous man shall be like a tree, planted by rivers of water. So I drew the river of water planting the seed.”

Aaaaaaah, “by.” What we have here is preposition trouble. The tree, you see, is planted beside the river, not as a result of the action of the river.

I bet I’ve read and heard that psalm hundreds of times. But this meaning of the word “by” never occurred to me.