Phoebe Age Seven interprets the first line of the third psalm as an actual question –“How many are my foes?”– though it was apparently intended as an exclamation: “Wow, that’s a lot of foes!” 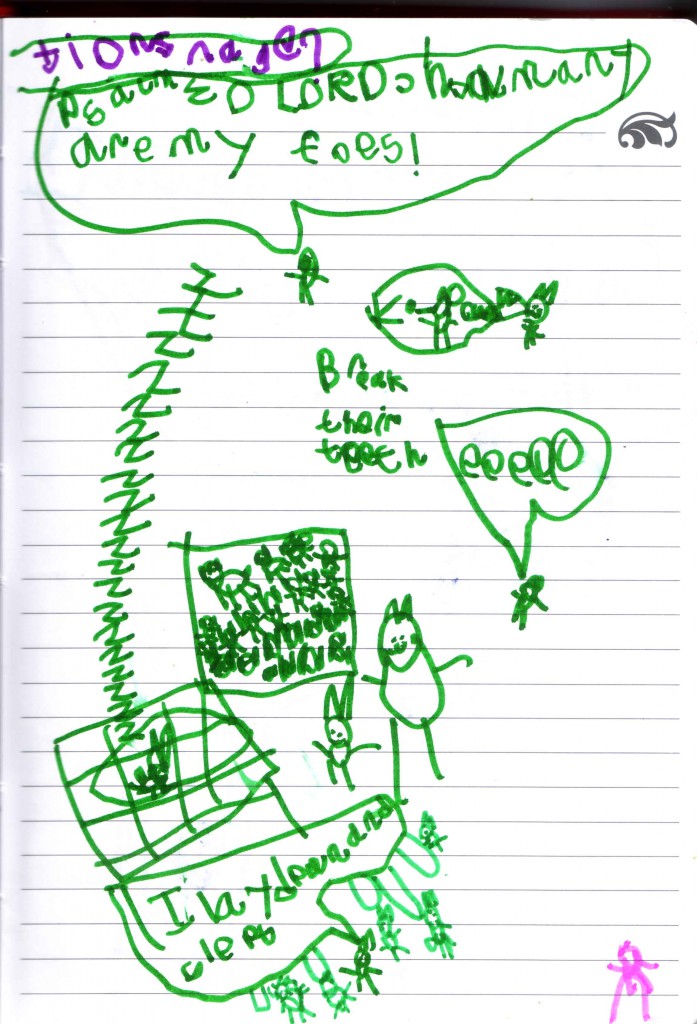 Phoebe Age Seven adds the exclamation point, but you can tell she’s thinking “give me an approximate count” because the center of the composition is a large cat (probably the Lord) showing a small cat a picture which enumerates her foes: 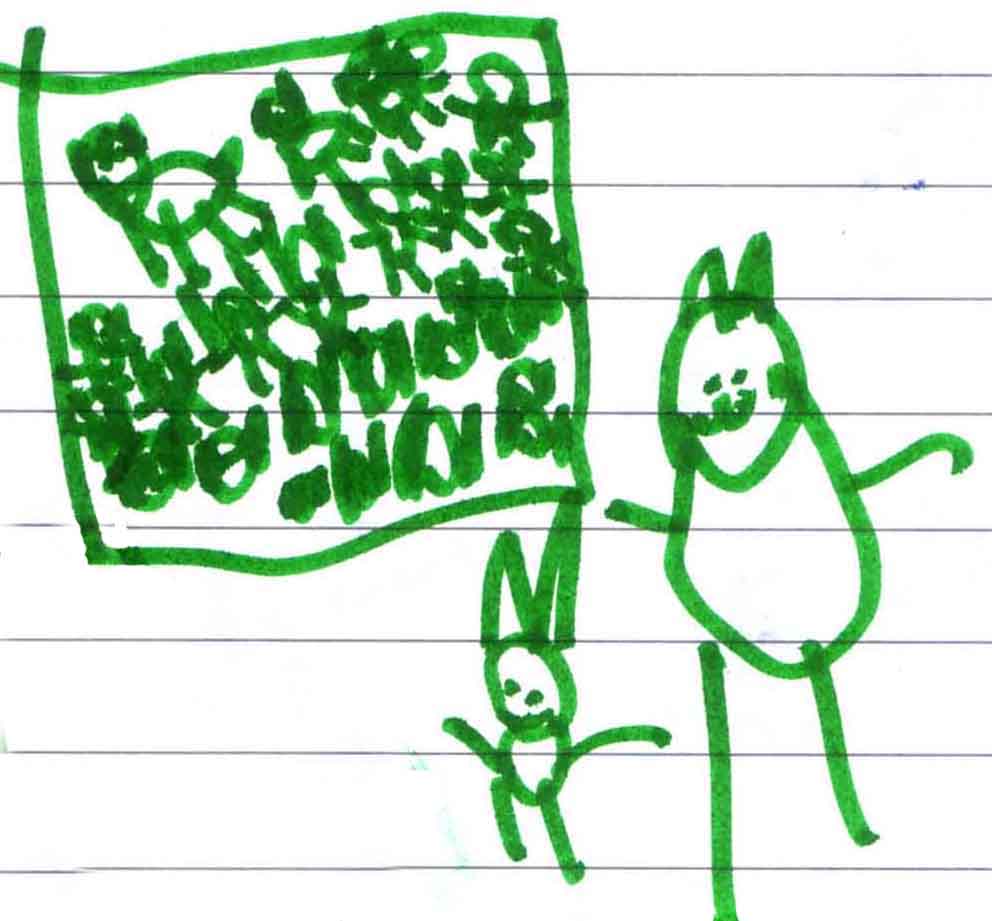 This many, small cat. This many are your foes. 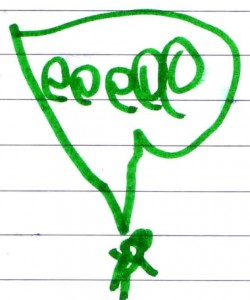 That’s a lot of foes, so the screaming figure on the right side of the page might be the Psalmist crying out, being “afraid of many thousands of people who have set themselves against me all around (Ps. 3:6).” But more likely, it is the Psalmist “crying aloud to the Lord (Ps. 3:7).”

The crying-aloud figure’s “eeeeeeeee” is an interesting contrast with the “aaaaaaaaa” figure who was featured in Phoebe Age Seven’s rendition of Psalm 2. Notice the differences between them: The eeeeee cat is obviously out of equilibrium, while the aaaaaa cat has a certain poise. 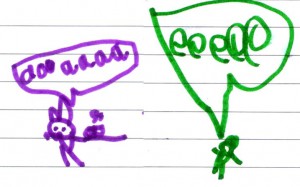 What the Psalmist cries out in Psalm 3 is a request for the Lord to intervene, specifically, to break the teeth of the enemy. Phoebe Age Seven renders the imprecation with calligraphic verve, and then follows it up with an image of the teeth being broken:

The enemy (perhaps a coyote?) seems to be breaking his teeth on a protective bubble of some kind. This is a rather passive interpretation of the tooth-breaking, but it brings out a nuance of the Psalm. Where other imprecatory Psalms will go straight for aggressive requests like “let them melt away like slugs,” Psalm 3 is mostly a lament over being outnumbered, and only requests that the power of the enemy be removed: break their teeth.

Psalm 3 is also a bedtime Psalm: It climaxes in the confident assertion (v. 5) that “I lay down and slept; I woke again, for the Lord sustained me.” 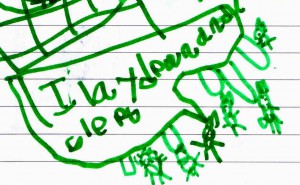 Phoebe Age Seven captures that trust with a cat reclining on a mattress, and a long string of zzzzzzzzzzzzzs rising up from the Psalmist to the Lord.

Sometimes sleeping is the best worship (but not on Sunday mornings). 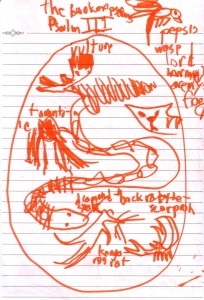 Freddy Age Nine also produced a visual interpretation of Psalm 3, and it marks a major departure in his Psalmtooning work. He had already made the decision to do all his Psalmtoons in the color orange (in distinction from Phoebe Age Seven who tends to change markers with each Psalm). But with Psalm 3, he makes it clear that he has imposed a further limitation on himself: All of his characters are desert animals. This decision will have major ramifications for his interpretations of the Psalms, but here in Psalm 3 it already determines what kinds of foes he can depict: Here we have the pepsis wasp, the lynx, the diamond-backed rattler, the vulture, the tarantula, and the kangaroo rat. How many are my foes! 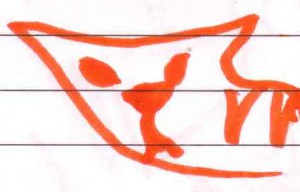 The lynx, it seems to me, is especially fetching. He peeks in from one side, wondering what he’s doing in a desert like this, but with a cock of his head that is more malevolent than just curiosity. 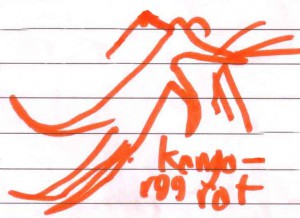 The kangaroo rat is shown almost hieroglyphically, in an inspired little assemblage of marks. Pressing all the desert creatures into service as foes, Freddy has left himself the problem of how to represent the Psalmist. What desert species should he be?

It is a major challenge, and Freddy Age Nine will bend his considerable pictographic resources toward solving it for the next several Psalms. But in this Psalm, he simply elevates the diamond-back rattlesnake to the status of chief villain, and then uses the kangaroo as both Psalmist and enemy. 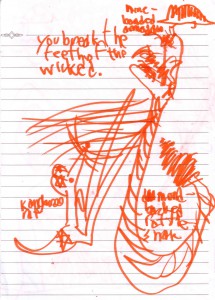 The two clash in a full-page illustration of “you break the teeth of the wicked.” The snake’s head is rocked backward from the impact of the gigantic feet of the kangaroo rat. The rat, by the way, is given an identifying mark that helps the reader understand his new function: A prominent star of David on his tail indicates that he is the Psalmist (and Psalm 3 is a Psalm of David). The six-sided star motif is repeated on his ears, for good measure. This image is especially powerful because of the confluence of force lines at its center: the horizontal motion lines cross over the sharp verticals of the impossibly elongated feet, and the stretched rat whiskers come in at their own angle.

In the top corner of the page, a nine-banded armadillo, clearly labelled, decorates the border area. But keep an eye on him. He will be coming down out of the border and into the main action in future Psalms.

As for the wicked and their sharp, sharp teeth: TAKE THAT! You won’t be biting with those teeth any more! 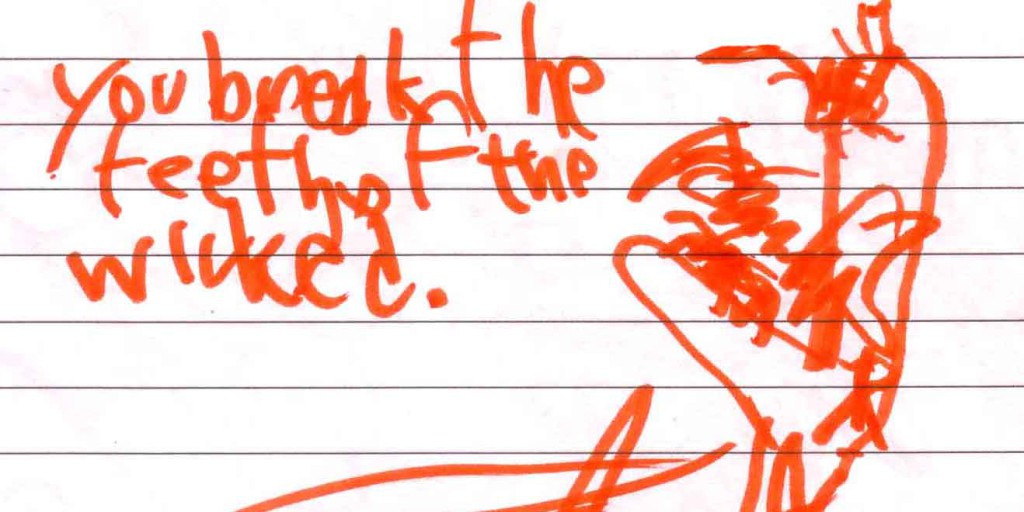