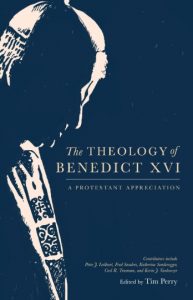 Here’s a new book worth looking out for: The Theology of Benedict XVI: A Protestant Appreciation , ed. Tim Perry (Lexham, 2019). It’s just an interesting idea to call on Protestant witnesses to write about the theology of this very theological Pope, and Tim Perry pulled together a fascinating set of authors, including Kate Sonderegger, Kevin Vanhoozer, Ben Myers, Gregg Allison, Luke Stamps, and Peter Leithart.

I got to wrote chapter 8, entitled  “Undiminished, Transcendent, and Relevant: Joseph Ratzinger’s Teaching on the Trinity.” The chapter outline’s right there in the three-term title. Here’s a sample from the first part of the chapter:

Ratzinger’s approach to the doctrine of the Trinity makes the most sense when we consider as broadly as possible what he thought was at stake in Christian witness in the modern world. Ratzinger was motivated by a sense that modern theology was in danger of trading away all that was best in the heritage of Christian doctrine. On his view, the danger was not that modern theology would accidentally do this in one fell swoop; it was that an entire series of trade-offs, carried out one after another along a definite trajectory, would result in the loss of faith’s reality. Writing in 1968 in the preface to his Introduction to Christianity, Ratzinger said that “the theological movement of the last decade” had to remind thoughtful people of an old German folk tale, the story of Hans im Glück.

In the story, Hans is given a large lump of gold, but finding it hard to carry, gladly trades it for a horse. This horse he then trades for a less troublesome animal, and then trades a pig for a goose and so on, until he works his way down to his final trade, in which a scissor-sharpener convinces him to accept a whetstone. When Hans accidentally drops the whetstone into the river, he reasons that he hasn’t lost much and simply returns home, glad to be entirely free of obligations at last. “How long his intoxication lasted, how somber the moment of awakening from the illusion of his supposed liberation,” Ratzinger notes, is left “to the imagination of the reader.” But for his part, Ratzinger makes clear how the story works as a parable of modern Christianity:

“The worried Christian of today is often bothered by questions like these: has our theology in the last few years not taken in many ways a similar path? Has it not gradually watered down the demands of faith, which had been found all too demanding, always only so little that nothing important seemed to be lost, yet always so much that it was soon possible to venture the next step? And will poor [Hans], the Christian who trustfully let himself be led from exchange to exchange, from interpretation to interpretation, not really soon hold in his hand, instead of the gold with which he began, only a whetstone which he can be confidently recommended to throw away?”

There is something playful in the way Ratzinger makes his point: he uses a folk tale, allows that “such questions are unfair if they are posed in too general terms,” and admits that “it is simply not correct to assert that ‘modern theology’ as a whole has taken a path of this sort.” But he is in earnest when he warns that in the theological developments of midcentury Roman Catholicism, “there is widespread support for a trend which does indeed lead from gold to whetstone.”

To illustrate some of what worried Ratzinger, I call in as witness not Hans im Glück but another Hans, Hans Küng.  That these two disagreed about important matters is hardly a secret, but I try to show how their disagreement is grounded in their divergent ways of handling the doctrine of God. And toward the end of the chapter I also connect a few dots to trace why Ratzinger’s particular critique of liberation theology took the form it did.

Here’s a summary paragraph about Ratzinger’s attempt to resist the trade-offs that would result in diminishing the Trinity:

The primary way that Christian confession of the Trinity was  diminished in the twentieth century was by the loss of transcendence, and specifically the loss of a sense of God’s transcendence over history. The deep interest of modern theology in the reality of history repeatedly distracted theologians from the eternal triune life in itself. Theologians often drew the doctrine down so close to human experience and historical development that they ended by entirely submerging the triunity of God into the history of salvation. In many cases, this movement remained only a kind of tone or attitude, suggesting that any talk of God in himself was irrelevant and inert, but that the real action was in the history of salvation. But often enough the movement went further, from gold to whetstone, in explicit denial that the Trinity has any internal or immanent life. Ratzinger rightly sensed that the tendency of much modern Trinitarianism was reductionist and in danger of being merely historicist. The style of Trinitarianism he deployed was designed to arrest that downward movement, using all the resources at his command to do so.

Did Ratzinger succeed in keeping the doctrine from being traded away for smaller and smaller items? Did the final trade indeed fall into the river and issue that dreaded theological kerplunk, disappearing under the flowing stream of history? Did Ratzinger find a way to maintain both the transcendence and the relevance of the Christian teaching on the eternally triune God? Reader, you will have to get the book to find out. But you’re going to want it for all those other chapters, too.