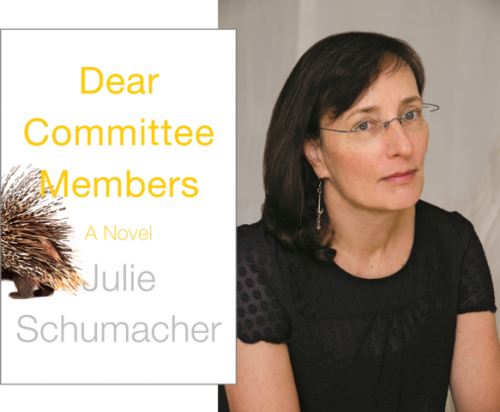 As the academic year rolls back around, I usually end up reading a late-summer silly novel. Nothing eases the pain of being a grown-up with a job quite like a dose of Wodehouse –though Alexander McCall Smith and Jack Handey also work pretty well.

I need more from a late-summer silly novel than just a little amusement; I want a book that delivers an actual laugh every few pages, and this year I found one that delivered —Dear Committee Members, by Julie Schumacher.

It’s a short novel written completely in the form of academic letters of recommendation. Epistolary novels are always a bit of a stunt, but is there a genre of epistle with less literary promise than the letter of rec? I was drawn into this book by the sheer unlikeliness of the concept, but it only took a few pages to convince me I should read the whole thing.

All the letters are by one character, professor Jason Fitger. Fitger teaches creative writing at Payne University, to which he has assigned the unofficial motto “Teach ‘Til it Hurts!” And they’re all dated, so we know they span from September 3, 2009 to August 3, 2010. Here is the first voice we hear:

Over the past twenty-odd years I’ve recommended god only knows how many talented candidates for the Bentham January residency … Well, you can scratch all prior nominees and pretenders from your mailing lists, because none is as provocative or as promising as Darren Browles.

Here is the oversharing (why does the committee need to know how long Fitger has been writing letters?), the inappropriately chummy tone (“god only knows how many”), and the lavish praise (tour de force!) that characterize all of his letters. But here already is also the specter of the unreliable narrator, the possibility that this is not a man we should believe either in his critical judgments or in his self-knowledge. Is the committee –are we the readers– supposed to believe that Bartleby-in-a-Vegas-Brothel is anything but the worst idea in the world for a long novel? Does Fitger believe it? Is this a joke?

And so a plot emerges. I admit I mainly enjoy this book as a collection of several dozen very funny letters, many of which can be read in isolation: the one where he tries to talk a paintball range into hiring one of his students; the one where he insults the way a company has spelled its name and predicts that his student will soon be running the place; the one where he veers back and forth between praising and condemning his tech support guy (“His approach to problem solving is characterized by sullenness punctuated by occasional brief bouts of good judgment”). But Dear Committee Members also unfolds the story of a tenured professor somewhat adrift. We overhear him during an eleven-month season in which he is reconnecting with his past (establishing or maintaining contact with several members of a formative grad school seminar) and trying to secure a future for a student (the Browles of the first letter, actually). It’s a good story, and Schumacher asks the reader to do just the right amount of work to reconstruct the events that drive it.

Fitger is a not a pleasant person to spend time with; he seems to have stalked in from some lost Updike novella with all the strengths (verbal dexterity, quick wit) and weaknesses (womanizing, narcissicism, entitlement) attendant on the middle-aged white profs that have anchored enough books to constitute a sub-genre. But he’s genuinely funny when he’s trying to be, and he’s often funny when he’s not trying to be, so we laugh with and at him by turns. And it’s a short  novel, so we can bid him adieu before he cloys.

The book also develops a meditation on the character and meaning of recommendation letters. Fitger, it turns out, is in the act of failing to write his  next novel, and instead is producing a voluminous amount of these letters. At one point in a letter of rec,  he inappropriately overshares his statistics: “By recent estimate I have penned more than 1,300 letters of recommendation, many of them enthusiastic, some a cry of despair.” In fact, we meet Fitger near the end of a a 3-year relationship that started via letters of recommendation: his girlfriend works in the Student Services office, and wanted to meet him in person after reading hundreds of his letters of recommendation (“an odd sort of wooing, consisting as it had to of my praise for others”). This reminds me of the undertaker in Evelyn Waugh’s The Loved One who flirts with a make-up artist further down the “assembly line” by fixing large, pleasant smiles on the faces of the corpses. Fitger turns out to be the king of the recommendation letter. After one particularly warm commendation, he muses, “writing letters of reference such as this one allows me to reinhabit, if only fleetingly, the pensive, knock-kneed person I once was and to advocate for that former version of myself.”

Along the way we get several touches of academic life that are well observed. For example, Fitger tries to get something done without having to go through proper channels, in order to avoid “loathsome hours battling the kingdom of No.” He chronicles the slow death of his humanities department as resources are channeled to economics and the sciences, and he tries to launch his students out of that doom zone, usually by asking potential employers to recognize their skills:

Be assured: the literature student has learned to inquire, to question, to interpret, to critique, to compare, to research, to argue, to sift, to analyze, to shape, to express. His intellect can be put to broad use. The computer major, by contrasts, is a technician –a plumber clutching a single, albeit shining, box of tools.

Being Fitger, though, he can no more avoid insulting his addressee than he can avoid describing the glories of the English major in a self-congratulatory and self-serving way. But let’s admit that this, too, has the ring of truth. Many a doughty warrior for the humanities is primarily a guardian of self-interest. His observations about his place in the pecking order are accurate. But so are Schumacher’s oblique revelations of the professional self-pity that underwrites laments over the fate of the humanities.

Asked to recommend a department member to serve on a committee, Fitger warns that there simply isn’t anybody available, because of the rigors of academic life:

more than a third of our faculty now consists of temporary (adjunct) instructors who creep into the building under cover of darkness to teach their graveyard shifts of freshman comp…. the remaining two-thirds of the faculty, bearing the scars of disenfranchisement and long-term abuse, are busy tending to personal grudges like scraps of carrion on which they gnaw in the gloom of their offices.

Hey, cheery stuff! And it gets cheerier:

I fear we are the last remaining members of a dying profession. We who are senior and tenured are seated in the first car of a roller coaster with a broken track, and we’re scribbling and grading our way to the death fall at the top.

But Fitger’s very unreliability saves the day, or whatever can be saved of it. By the books’ end, he is ushered into something like clarity about himself, his situation at Payne, and the meaning of the events he is living through. There’s an important insight just under the surface of the deftly-crafted conclusion.

But read this book for the laughs. If you’ve lived the life of the academic recommender, you’ll experience recognition time after time in Dear Committee Members. I hope you don’t experience too much recognition of the world of Payne; just enough to get the jokes.