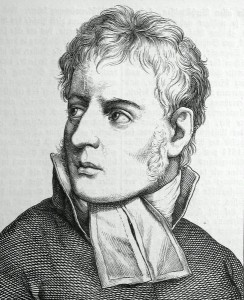 As I celebrated the graduation of the Torrey Honors Institute class of 2013, I took some time to think back on significant times I had shared with them. I thought of the Christmas party at my house their freshman year and the camping trip their sophomore year, when we read the entire Divine Comedy around the campfire.  However, in my judgment the most significant time in terms of our mutual education came in their junior year when I was their tutor for class sessions on selected works by Friedrich Schleiermacher. The discussions gave me a lot to think about, and after doing some Bible study and some outside reading, I sent them an e-mail as a follow up to our class discussions.

It was great to be with you for several sessions at the beginning of the semester. When I came your sessions, I felt the warmth of being with old friends.

You probably recall that in the Schleiermacher sessions, we spent a good bit of time at the end of class talking about his sermon on prayer. I was surprised to find how sympathetic many of you were to his presentation on prayer. What puzzled and concerned me is that Schleiermacher’s denial that  prayer can have any effect beyond the spiritual improvement of the person praying seems to directly contradict the teaching of Jesus and the teaching and examples elsewhere in the Bible. The Bible teaches that God effects change in the world in response to prayer and that some changes will not occur if we do not pray.

I’ve thought about why Schleiermacher’s point of view might seem plausible or appealing. My first thought was that people might be reacting to all the ways Bible’s promises regarding prayer can be abused: “name it claim it” theologies, treating God like a genii whose job is to fulfill wishes, overconfidence that God must always grant us what we ask (particularly in regard to finances or healing). I also considered that what Schleiermacher affirms about prayer’s effects are great truths: prayer does help us align our thinking to God’s thoughts and submit our wills to his ways. In class, someone brought up Philippians 4:6-7, which singles out freedom from anxiety and peace of mind as effects of prayer without referring to specific answers.

Although the teaching of Christ may be abused and some of Schleiermacher’s teaching is true and helpful, there is also great danger in accepting Schleiermacher’s denial of Christ’s teaching on the efficacy of prayer. As I considered it further, I wondered how much the appeal of Schleiermacher’s denial comes from more troubling sources. The first is the naturalism that pervades modern thinking. The mainstream of popular and scholarly thought in the last two or three centuries (at least in the West) has had very little place for a God who intervenes in natural events or human history. The second is personal doubt that comes from experience. When we ask God for things and then don’t receive them, it becomes easy to think that our requests aren’t heard.

The Bible, especially the New Testament, encourages us to have three things in respect to prayer: boldness to bring our requests to God, faith to trust that he is able and willing to give us what we request, and endurance to keep on asking when our requests aren’t immediately granted. Schleiermacher’s denial of prayer’s efficacy, and the naturalism that lies behind his denial, undermines all three of these. The corrosive effect his teaching can have on our faith is why it is so dangerous.

I’ve put together three resources for thinking about the efficacy of prayer in relation to Schleiermacher. The first is a collection of Bible verses that deal with the efficacy of prayer. I’ve bold-faced a handful of the verses that seem to sum up the Bible’s teaching. The second is from Andrew Murray’s classic, With Christ in the School of Prayer. Note the last selection, a prayer that grounds petitionary prayer in the relationship of the Father and the Son before the foundation of the world, a relationship seen in Psalm 2 “You are my son… Ask of me, and I will give….” The third is a direct critique of Schleiermacher’s naturalism and the resulting denial of petitionary prayer from a book by William Dembski (pgs. 61-66). As I prepared to write this, I re-read most of Miracles by C.S. Lewis which is also effective in challenging the kind of naturalism found in Schleiermacher. However, I found Dembski’s critique more helpful since it directly engaged Schleiermacher on prayer. (Note: of the six pages, the first two are the most difficult. Don’t let them keep you from reading the rest of the selection.)

There are obviously many difficult things to think through in regard to prayer. I hope that you will bring your best thinking to bear on it these difficulties. I’d be more than happy to discuss them with you. Of course it’s more important that we actually act on what we learn from the Bible and pray. It’s my prayer (yes, I’ve actually been asking God to accomplish this) that God would use this discussion to clarify your thinking about prayer and strengthen your faith that your Heavenly Father is ready and willing to give you, his beloved children, what you ask from him.