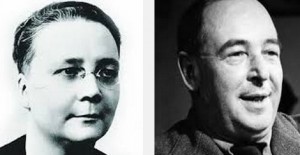 Last year, four professors from Torrey gave brief talks on some of our favorite 20th-century Christian thinkers (Chesterton, Sayers, Tolkien, Lewis). Videos of the talks are here; the whole thing was pretty obviously an excuse to collaborate with Chris Mitchell on a project where he could share his expertise with the whole Biola faculty.

But “expertise” is an interesting word for this series on non-experts. Although we tend to categorize them as “Christian thinkers,” all four were conspicuously not professional theologians, pastors, or spokespersons for official ecclesial bodies. Tolkien and Lewis were academics in non-theological fields: literature and philology. Chesterton was a journalist/writer, and Sayers was an advertiser, novelist, playwright, and translator. Two Catholics and two Anglicans, more or less good churchmen, but not an ordination or pastoral-theological degree among them.

It is crucially important that it was amateurs, laypeople, who contributed so much to midcentury public awareness of Christian doctrine. It is no accident that these non-professionals are the ones who reached such a wide audience, and the ones who are still with us in so many ways.

A friend wrote to me over the weekend and pointed out this passage from my talk introducing Sayers:

She was convinced that Christianity had a magnetic power of attraction if only it were stated clearly…Sayers was actually an advertiser…She recognized that what Christianity needed most was not to be redesigned, tweaked, updated, defended. What Christianity needed most was to be sold and Sayers devoted her skills to getting the main ideas of Christianity into the public mind by any means necessary. She didn’t often argue in defense of the faith in traditional apologetics, instead she developed an apologetic of simple presentation. If people simply see and understand what the church has been claiming all these years, they’ll be drawn to it. The dogma doesn’t need to be made exciting, there’s no way to add any drama to it from the outside.

What my friend experienced in that passage was moment of recognition, a clarity about his vocation as a Christian communicator. The task before him is not to become increasingly professionalized in an authorized pastoral or academic role, even when these options are available. The major task is to communicate what he knows, creatively and persuasively, to a wide audience that doesn’t expect to hear it from non-experts.

One of the most touching moments of vocational reflection in the life of C.S. Lewis is in a letter he wrote about the future of communicating Christian ideas. After considerable success in this arena, Lewis had a kind of mid-life anxiety about whether anybody was going to join him in the work of being a non-expert translator of Christian ideas into everyday language:

People praise me as a ‘translator,’ but what I want is to be the founder of a school of ‘translation.’ I am nearly forty-seven. Where are my successors? Anyone can learn to do it if they wish…I feel I’m talking rather like a tutor—forgive me. But it is just a technique and I’m desperately anxious to see it widely learned.

Lewis was great at what he did. Where are his successors? The school of translators that he hoped to found is still too sparsely staffed. “Anyone can learn to do it if they wish… it is just a technique.” Graduates of that particular school of translators, the Lewis and Sayers school, will not be the professional theologians and pastors. They will be amateurs who do something else for a living, and who find their voices and their audiences in surprising ways unavailable to the professionals.