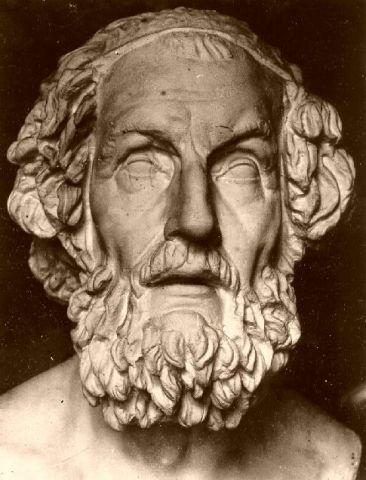 Every year our freshmen begin their college education reading Homer’s Iliad. And every year our freshmen stumble upon the same sophisticated “insights” about the ancient poem. They posit that Homer, or some poet before him, able neither to explain nor to master the wine-dark sea, deified the visible phenomena as Poseidon, Ocean, nymphs, and so on. They suggest that the Greeks, finding love to be such an unassailable power, took some solace in myths of Aphrodite and Cupid. In short, students make sense of his writing by considering it an artefact of the pre-philosophic and pre-scientific mind.

While this is a mildly plausible (and sometimes, with greater nuance, scholarly) explanation of some of Greek poetry and religion, my students have little reason to believe it. In fact, when pushed to explain themselves, they usually reveal that what motivates their read is something that C. S. Lewis and friends called chronological snobbery–“the uncritical acceptance of the intellectual climate common to our own age and the assumption that whatever has gone out of date is on that account discredited.” And while snobbery in any form is unbecoming, chronological snobbery has the added demerit of being bad reasoning.

The fallacy is large in its consequence. By it we perpetuate the blind spots peculiar to our age and, so doing, miss the insights of those who might show us another way. In the case of reading Homer, the claims of scientific naturalism (to which my students hardly know they are committed) leave little room for the claims of religion and imagination.

If we make his poems into tools by which we simply reinforce our own ideas about the cosmos, we can hardly expect Homer to teach us. Our insights are about the text not from it. Instead, to take him seriously as a teacher, we must increase the humility and charity of our hermeneutic. But, taking Homer seriously gets a little uncomfortable.

Homer’s poems inscribe a tradition that peoples history with heroes whose lineages boast divine seed. Certainly, this poetic memory of a heroic age intuits that humankind has suffered a loss of former greatness and nearness to divinity. But the Iliad blurs lines between poetry and history. The poem also attempts to tell who was born of whom, where people dwelled, what battles they fought, who won, and how. Even in the golden age of the Athenian intellect, the Greeks believed not only in the Trojan War, but also in Homer’s stories of it.

We call mythology what was also Greek religion. Junior-high literature students endure mythology units sketching pictures of gods and goddesses, drawing divine genealogical trees, and synthesizing myth variants. We have done our best to domesticate the ancient beliefs, which made wild and totalizing claims about reality. But religion, not mythology, builds temples, makes sacrifices, and performs rites, processions and ceremonies.

Making museums of ancient religious sites is one way to comprehend (and, dare I say, sterilize) the past. Byzantine Christians, on the other hand, converted the Parthenon to the Church of the Theotokos, and the Ottomans converted that church to a mosque.

Much of western history is marked by a certain fidelity to the Homeric imagination. Alexander the Great slept with two items beneath under his pillow on his military campaigns to conquer the East: a dagger and a copy of the Iliad. He believed the poem to offer the greatest guidance for military strategy. Virgil immortalizes the Romans as the Trojan remnant, rendering so poignantly the image of Aeneas carrying on his back his father Anchises and his family’s gods from a Troy in flames. Geoffrey of Monmouth tells a story of Aeneasâ€™s grandson Brutus founding London, and calling it New Troy.

And with even the surprising force of literalism, the fifteenth century Ottoman Turks rooted their history in Troy. When Mehmed the Conqueror led the Turkish conquest of Constantinople he claimed, as the leader of the Trojan remnant, “Now we take the revenge of Hector.”

Still, some of the most faithful to the Greek imagination find it difficult to be Homeric literalists. For instance, Lord Byron was the first person known in history to swim the Hellespont, a mile-long strait between the Sea of Marmara and the Aegean. He was inspired by the Greek myth of Leander, who nightly swam the Hellespont to visit his beloved Hero, who nightly lit his way from her window. When Hero’s light failed in a winter night’s storm, Leander drowned, and Hero dove in to the water to take her death with his. In a poem commemorating the occasion of Byron’s own swim, he still calls the account of Hero and Leander “a doubtful story.” But it was this doubtful story that worked so strongly on Byron as to inspire his daring feat.

Must we, like the Ottomans, take Homer literally in order to take him seriously? Or, like Byron, can we follow the poet though we think he is blind? Neither quite satisfies me.

Novice that I am, I’ll admit that taking Homer seriously is hard work. But I take it to be simply the hard work of reading.