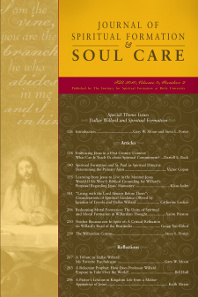 The Spring 2016 issue of Biola’s Journal of Spiritual Formation and Soul Care has a brief tribute to Robert Mulholland, who died in December 2015. Editor Steve Porter puts Mulholland on the “short list of the founders of the spiritual formation movement.”

I’m an editorial consultant for JSFSC and knew Mulholland at Asbury Seminary, so Steve asked me to write a quick remembrance of Mulholland. I remembered this:

I took exactly one class with Bob Mulholland during my MDiv at Asbury Theological Seminary in the early 1990s. Mulholland was serving as Provost at the time, which must have been a heavy administrative load. But he kept one foot in the classroom as well, teaching the class on Revelation (NT666, a course number apparently designed to warn a certain kind of student away) and also offering the course I took, Roman Hellenism. I wrote a rather sprawling paper on the logos philosophy that reached back to Heraclitus and forward to Origen. Dr. Mulholland guided it bibliographically and graded it enthusiastically. It never occurred to me how far outside his field of expertise Mulholland was going in teaching that sort of interdisciplinary history or classics course as New Testament background, because he handled every aspect of it with such high professional standards. He taught efficiently and with passion, but did not draw attention to himself.

And also this, which is printed in the journal along with remembrances from others:

My favorite Mulholland book is 1985’s Shaped by the Word: The Power of Scripture in Spiritual Formation. Back then it seemed to be speaking a language nobody else was speaking yet, and Mulholland gently introduced concepts like the distinction between reading for formation rather than for information. Somewhere in the book he encourages readers to approach scripture as the word of God in the full New Testament sense of ‘logos:’ as “the shaping, organizing, forming principle of the universe that held everything together and directed its course.” It’s no surprise the word would shape its readers, since it is such a potent giver of form. Mulholland must have been one of the first to draw these connections together and articulate them in a way that reached contemporary evangelicals. He was a major figure in the spiritual formation movement, and an early anchor to hold the movement firmly to biblical standards.