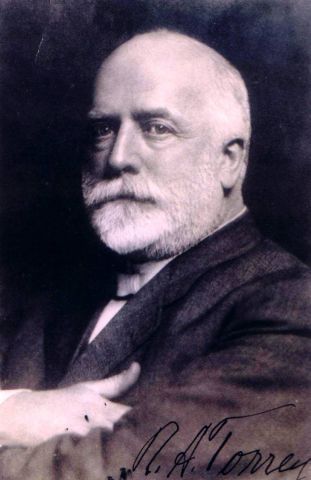 In 1917, R. A. Torrey preached a sermon to his congregation the Church of the Open Door in Los Angeles. His text was Psalm 1, and the sermon had the promising title: THE SECRET OF BLESSEDNESS IN HEART, BEAUTY IN CHARACTER, FRUITFULNESS IN SERVICE, AND PROSPERITY IN EVERYTHING. But despite the “How To Succeed” tone of the title, Torrey wasn’t selling easy answers or nifty tricks for getting prosperity. Instead, he was up the same thing he’d been doing for years: preaching the main things as the plain things, even in the midst of war-time. These sermons were published that year in the volume The Voice of God in the Present Hour (NY: Revell, 1917).

The main, simple thing Torrey wants to focus our attention on from Psalm 1 is that blessedness comes from meditating on the word of God. â€œThe reason why many do not delight in the Word of God is because they do not eat it. They read it; they skim over it, they smell of it, but they do not eat it, and yet they wonder why they do not delight in God’s Word.â€ Torrey recommends “eating the word” by meditating on it, and on his way to applying the idea directly to our use of Scripture, he takes a great swipe at how our culture has lost its ability to meditate, and the schools aren’t helping:

We live in a day in which meditation is largely a lost art. It is largely a lost art in all our study. We send our children to school, they are not allowed to think; they are simply crammed and crammed –we cram them with physiology, biology, psychology and all the rest of the ologies; until they themselves become mere ape-ologies for real thinkers. We try to see how many branches we can cover in a few years and how much we can cram in. A child in the Grammar School grade has twelve studies; a child of thirteen will be set to writing a criticism of Tennyson’s ‘In Memoriam.’ This is a good way to develop conceited fools, but it is no way to develop thinkers. Set a child of thirteen to criticizing Tennyson’s ‘In Memoriam’ and by the time she is eighteen she will be criticizing the Word of God itself. But cram, cram, cram, is the word of the hour in modern education. If our children studied fewer subjects and really studied and mastered those they did study, they would know more and be of more use in the world.

“But it is in Bible study especially that meditation is a lost art,” Torrey goes on.