One the happiest parts of my life at present is the view out my office window. My second-story window in Sutherland Hall at Biola University looks down on a little sunlit courtyard with a fountain. The branches of a tree touch the window, and through-out the day, the sunlight filters through the leaves illuming and shining through some and casting shadows on others.

Watching the sunshine outside his window gave joy to Andrew Murray. He wrote, “From my breakfast-table I look out on a beautiful valley, with trees and vineyards and mountains. In our spring and autumn months the light in the morning is exquisite, and almost involuntarily we say, How beautiful!”

The beautiful valley Murray saw out his window is in Wellington, South Africa. Wellington is a little further inland from Cape Town than Stellenbosch, with its famous vineyards, but not as far in as Ceres. I happen to have read a description of the beautiful Ceres Valley in Afrikaans! When I lived in Kenya in the 90’s, I used to get Ceres fruit juice from South Africa. On the back of the juice carton, it described where the juice (die vrugtesap) came from: a “vrugbare valley, omring deur berg, waar die vrugte so soet and sappig groei” (a fertile valley, surrounded by mountains, where the fruit grows so sweet and juicy).

Andrew Murray (1828-1917) lived a remarkably fruitful life. Like his father, he was a pastor in the Dutch Reformed Church in South Africa. He was not only a pastor but also a missionary, an evangelist, an educator and a writer. He helped to found a mission society and several schools including the Theological Seminary of Stellenbosch and the Huguenot Seminary for women. He was a spokesperson for the South African revival of 1860 and spoke as an evangelist in Europe and America. He also wrote over 200 books.

The passage about the sunlight on the beautiful valley comes from a devotional book Murray wrote in 1895 called Waiting on God. Each day for 31 days, Murray offers a meditation on a scripture passage about waiting on God. The theme verse is Psalm 62:1: “For God alone my soul waits in silence; from him comes my salvation.”

The meditations include both theological reflection and practical advice. The theological reflections on the nature of God and mankind offer the fruits of almost fifty years of spirit-led biblical study and preaching. On mankind’s nature, he writes, “Man was not [created] to have in himself a fountain of life, or strength or happiness: the ever-living and only living One was each moment to be the communicator to him of all that he needed.” The advice he offers is practical and simple enough that even a new believer can try it out right away. “When you are praying, let there be intervals of silence…in which you yield yourself to God.”

This last fall while I was on a sabbatical semester, I read through the devotional twice. I’m trying to learn what it means to wait on God and look to him for guidance and strength. During the same time, I was reading a book I’d been given about cultivating “mindfulness” by the practice of taking a few minutes to break from my thoughts and focus on bodily sensations (especially the sensation of breathing) and current emotions. The rationale is that it will interrupt the unproductive cycles of thought about things that aren’t present, cycles of thought that can spiral down into anxiety, bitterness, and depression. I figured I would give it a try; that even if it didn’t accomplish much, at least it would give me some little relaxing breaks from my work. 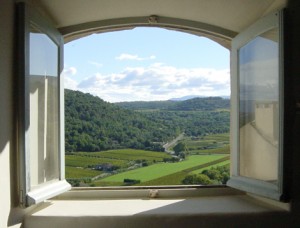 At the same time, I wondered if there weren’t some authentic Christian alternative to this advice that came from secular psychologists, or perhaps ultimately from Eastern spiritual practice. I read a little about “centering prayer,” a similar practice offered by Christians that suggests focusing on a simple word from God instead of on bodily sensations. However as I read Andrew Murray’s book, it seemed like the practice of “waiting on God” had the most to recommend it—not least the dozens of scripture passages Murray collected on the subject. 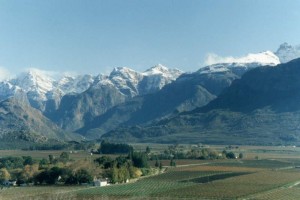 The picture of waiting on God I found most memorable in Murray’s book comes in the meditation on waiting for God’s light, the one in which he describes the sunlit valley. He is meditating on the verse “My soul waits for the Lord more than the watchmen wait for the morning” Psalm (130:6), and he reflects that as the watchmen wait for the sun to shine on them, “God has shined in our hearts…the light of the glory of God in the face of Jesus Christ” (II Cor. 4:6). Nature teaches us, he goes on, that we can live in the light of the sun all day, but what plants do involuntarily we are to do voluntarily. “Even as the trees, day by day, and month by month, stand and grow into beauty and fruitfulness, just welcoming whatever sunshine the sun may give, so it is the very highest exercise of our Christian life just to abide in the light of God, and let it, and let Him, fill us with the life and the brightness it brings.”

He looks out the window at the beauty of the sunshine on the valley, “and the question comes, Is it only the light of the sun that is to bring such continual beauty and joy? And is there no provision for the light of God being just as much an unceasing source of joy and gladness? There is, indeed, if the soul will but be still and wait on Him, will only let God shine.”

This is a beautiful picture of what it means to wait on God. Sitting still, enjoying the warmth and light of God’s love, “just welcoming whatever sunshine the sun may give.” I’m reminded of the children’s story of Ferdinand the bull, who overcame the “distractions” of a bull fight by “sitting just quietly” in the sun and enjoying the flowers, a habit he had formed by long practice under a cork tree. Sitting just quietly…. 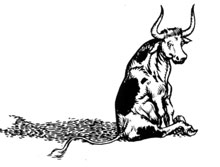 Of course, this is not all that waiting on God involves. The picture in Psalm 130 of watchmen waiting for the morning reminds us that the usual time for waiting is in the long dark night. It’s also true that waiting on God, silently waiting for whatever he has for us, is not the only kind of prayer. It has its complement in the kind of prayer described in Murray’s earlier and better-known book With Christ in the School of Prayer. In that book, Murray draws only on the teaching of Jesus and the memorable pictures of prayer are of the widow who begs the judge for mercy until he relents and the man who asks his neighbor for bread at midnight: these models of prayer are definitely not just quietly waiting for whatever God chooses to give.

Waiting on God is also not the whole of Christian life. Murray followed up his book with sequel titled Working for God. I read it each day in January in preparation for the semester of teaching that started last week. I’ll use it a second time in February, and I’ve invited my students to join me. Murray reminds the reader with a new scripture passage every day that God expects his children to produce the fruit of good works. But he also reminds them that there is no way to bear fruit without drinking in the light of God’s love.