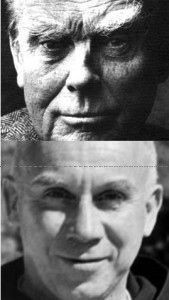 In 1958, Thomas Merton, the Trappist monk, wrote a fan letter to Czeslaw Milosz, the Polish poet. Milosz knew some of Merton’s writings, and replied to the letter. The two struck up a correspondence that lasted for a decade, until Merton’s death in 1968. Those letters, fascinating for anyone who likes either or both of the authors, have been published as Striving Towards Being: The Letter of Thomas Merton and Czeslaw Milosz, edited by Robert Faggen (NY: Farrar, Straus and Giroux, 1997).

Merton (1915-1968) and Milosz (1911-2004) obviously wrote to each other with great excitement, and sensed some sort of rapport. But it’s pretty evident that they spend quite a bit of time talking past each other. Merton has opted out of the fast life by this time, leaving behind his globe-trotting ways and monking it in Kentucky. Milosz, on the other hand, is finding that, having staked everything on being Polish, now he must move to America –even worse, California! So just as Milosz is busy trying to figure out the strange coastal inhabitants of the New World, Merton is lobbing interpretations at him from a very different locale.

Merton likes Pasternak’s Doctor Zhivago, but Milosz is cold toward it: He sees in it “certain undercurrents” of the myth of “Crucified Russia, as the Saviour of mankind, as a chosen nation opening the paths to true Christianity through suffering,” which shows up as “part of Dostoyevsky’s historiosophy and appears in many other authors –also, in a discreet form, in Pasternak.”

Milosz shares some interesting reflections on how he is able to write without putting people on guard about his Christian commitments. Merton, of course, is a monk who cannot possibly write undercover. But Milosz is a poet, and can be sneaky:

A friend of mine reproaches me that I never write what I really think, that I am a dialectician, always speaking through the hat, perhaps a coward. I concede that he is right to a certain extent. But one has to be rusé as human limitations are great and what our readers would reject when said in an outright way, they swallow hidden in a pill which does not shock their snobbery. This principle I apply in a limited extent only, being besides practically helpless before the Western public from which I am separated not only by the barrier of language. As to my Catholicism, this is perhaps a subject for a whole letter. In any case few people suspect my basically religious interests and I have never been ranged among “Catholic writers.” Which, strategically, is perhaps better.

In 1960, Merton wants to hear Milosz’ worldly reflections on the cold war, and drops a few hints about Russian and the United States. Milosz speaks from a thousand miles above the ground: “You know that I am sceptical about Russia… As to America, I do not know. Anglo-Saxons are protected against many follies by their reluctance to grasp any philosophy of history –that reluctance is at the same time their weakest point.”

One thing Merton and Milosz can agree on completely is how terrible TV is. In late 1960, Milosz spends two days at a colleagues’ house in Los Gatos, and is apoplectic about the infernal TV device:

My children were looking for hours at television, to my impotent rage…. Just a few minutes before the television for me were enough to induce a state of shame an sadness for the whole evening. Among other nice things– commercials humiliating for human beings engaged in them– I saw the face of a judge from the South wo proclaimed that desegregation is ‘communism’: imagine those Negroes who listened to him and the only kind of conclusion they could come to.

In 1961, Merton tries contrasting himself and Milosz and the other people who “get it” with the people who don’t get it: the squares. Milosz immediately warms to the word, and tries out this groovy new bit of patois. It never quite sounds convincing, man. Merton opines that the squares want answers, but the non-squares (rounds? I was never sure what the alternative was) understand that the questions never go away: “There is something wrong with questions that are supposed to be disposed of by answers. That is the trouble with the squares. They think that when you have answers you no longer have questions.”

But Milosz will have none of it:

I do not agree with you when you say that you do not want answers, as answrs are what the ‘squares’ want…. They right if they have that desire. We have to integrate new and new questions and answers into a new image of the human universe. That’s why theology is, I feel, important…. Existential angst is not enough.

The letters collected in Striving Toward Being are fascinating to read. They throw some light on Milosz’ transition to life in California, and Milosz speaks much more clearly to Merton than he does in the eerie classic Visions from San Francisco Bay. The two writers maintain a great eagerness in their exchanges, but somehow they never quite end up on the same page. They were very different people, it turns out. They shared a desire to be radically Christian, and to use their writing to make a difference in the world. But beyond that, when their talk turned to politics or specific literary judgments, it tended to fall flat.