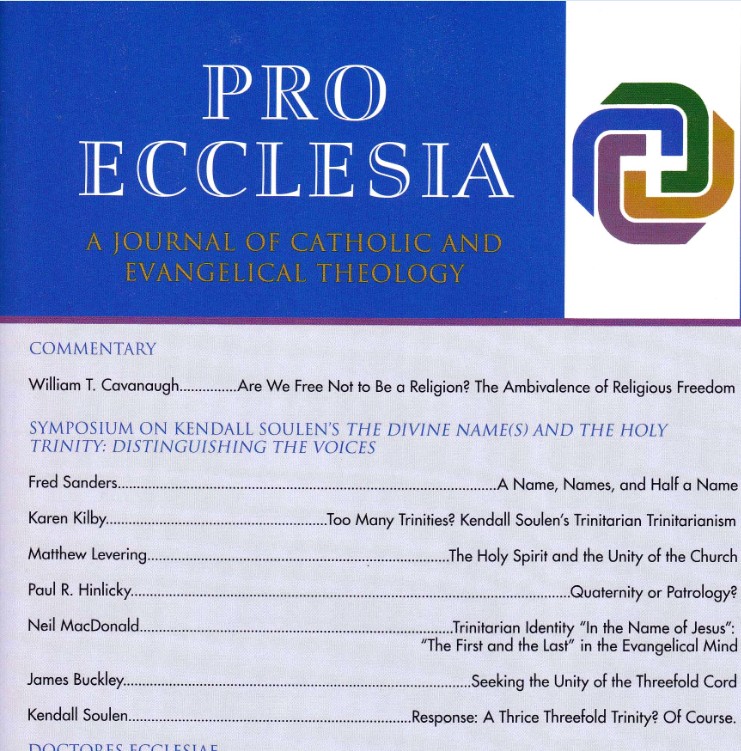 The Winter 2014 issue of Pro Ecclesia: A Journal of Catholic and Evangelical Theology features a 58-page symposium on Kendall Soulen‘s important 2011 book The Divine Name(s) and the Holy Trinity: Distinguishing the Voices. That seems like a lot of pages of commentary, but they are well deserved: Soulen’s book is both a solid accomplishment in its own right and a catalyst for further conversation.

I’m enthusiastic about this book, so I was glad when editor Joseph Mangina invited me to participate. The whole symposium is good, but then again you can always count on Pro Ecclesiato be one of the best journals out there: consistently serious, rigorous, and relevant.

Fred Sanders: “A Name, Names, and Half a Name.”

Soulen’s book… recommits Christian theology to take seriously the task of confessing the revealed name of God. The task, as Soulen sees it, is to reckon with that one revealed name of God (thus “The Divine Name” of the book’s title) and also with the infinite set of ways we can refer to God (thus the parenthesized “(s)” of the title). Between that one name and those many names hovers the traditional terminology of the baptismal commission: Father, Son, and Holy Spirit (thus “the Holy Trinity” of the title). What we have in this book is a theological project that suspends the three between the one and the many.

If it has a weakness, it may be that at times it is a little too rich, thought out a little toothoroughly, offering us perhaps more consistency and order in these new patterns than it should…. The somewhat overpatterned quality of the work can at times also be felt on other levels. While a number of Soulen’s readings of passages in Exodus are engaging and illuminating, the insistence that a threefold pattern of God’s uniqueness, presence and blessing can be found consistently across the canon leads in some cases to rather forced exegesis. …It will take some time for it to be properly assimilated, but my guess is that within a few years those writing on the Trinity who have not grappled with Soulen’s work will seem embarrassingly out of date.

Matthew Levering: “The Holy Spirit and the Unity of the Church.”

…I receive Soulen’s work as a superb reminder of the need to remember the name YHWH. In my view, forgetting the God of Israel’s personal name YHWH can lead us to suppose that God’s oneness somehow means a less personal, less loving, less communicative God. In other words, we can accentuate the Trinitarian communion of Persons in a manner that makes it seem that, prior to Pentecost, no one really knew the personal God because they “only” knew the one God. In fact the Trinity is one God: the mystery of divine communion is, among other things, a mystery of ineffable and transcendent unity.

We are rightly commanded not to take the name of God in vain as a first principle in theology. The question therefore is whether Soulen proposes obedience to this rule by means of an apophatic reserve of a katphatic Name or by construing the Name instead as an apophatic sign. The latter arises out of the polyonomy of divine names seeking God beyond the gods, beyond language, by direct intuition in the mystics, by a beatific vision in heaven, or in infinite resignation, as in Derrida.

Neil MacDonald: “Trinitarian Identity ‘In the Name of Jesus’: ‘The First and the Last’ in the Evangelical Mind”

It is the benchmark of orthodoxy to use the Tetragrammaton to include Jesus in the divine identity of YHWH as narrated in the Old Testament… Not to employ this pattern of naming is not to identify –name– the Triune God since this God is none other than the God of Israel. It is not merely a question of failing to name “most appropriately”; it is rather one of failing to name altogether because of naming anotherthan the people Israel’s God, Jesus’s God, the people of God’s God.

James Buckley: “Seeking the Unity of the Threefold Cord”

What we have by book’s end are the threefold nonidentical repetitions articulated in different ways for each of the three Persons in Scripture and (haltingly) in traditions Catholic and Evangelical. By volume’s end the problem I here find is this: where is the unity of this threefold repetition –a oneness focused in the Tetragrammaton, made complex in “Father and Son and Spirit,” and made even more complex in the multiple forms of naming here appropriated to the Spirit?

Kendall Soulen concludes the symposium by responding in turn to each of the participants, and his responses are a model of how to defend one’s work without taking a posture of defensiveness. The key is that Soulen really wants to know the truth about how to hallow the name of God biblically, and he’s more interested in the possibility of learning more about that than he is in proving that he wrote everything perfectly. So whether he’s ceding a point, re-stating an argument, critiquing the critic, or promising to say more in the forthcoming second volume of this two-part work, Soulen is always about the task of honing his theology of the name of God. This is already a landmark book, full of surprises and well resourced. As Soulen continues to extend the project and expand the dialogue, it will become even more helpful over the coming years.