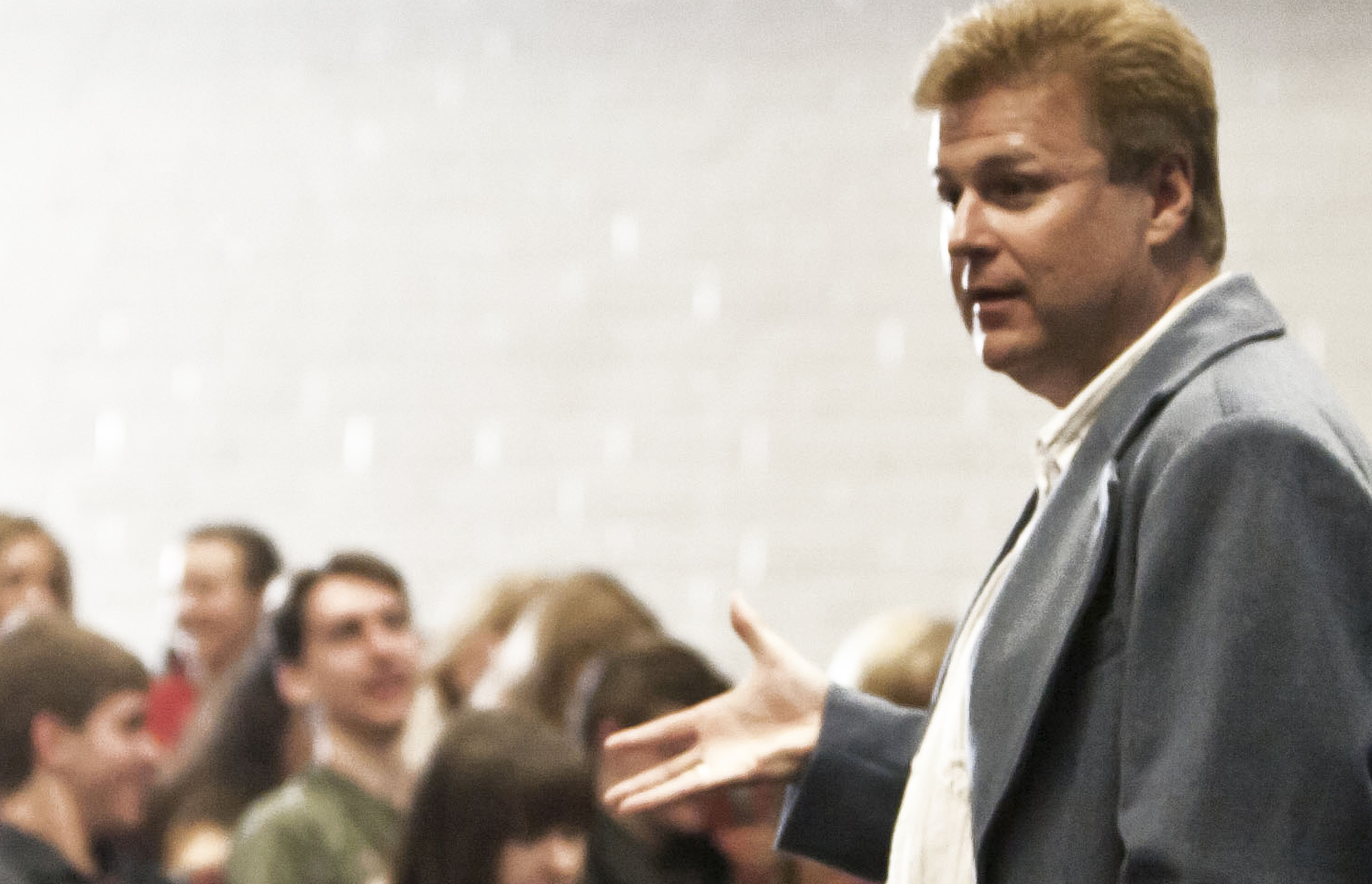 In the previous post, John Mark announced that he was leaving the honors program he founded to become the new head of academics at Houston Baptist University. He’s continuing, of course, to be an essential member of the team at Wheatstone Ministries through insight at board meetings, speeches at conferences and events, his kind and jolly mentoring, and so much more (…and, by the way, since that’s the case, look out Houston! Before too long, Wheatstone will be rolling back into town…), but it’ll be sad when we’re unable to pop by his house on a whim to laugh and to talk.

I’m very, very grateful for his work at the Torrey Honors Institute. With his peers, he built a program so personal and so profound that it felt both like home and like a whole new world to me and to my friends when, as starry-eyed freshmen, we stepped on in. We were challenged simultaneously to achieve more and to love more. We were given an education that is so deeply based on people that we could take it wherever people go, whether to the cubicle, the halls of power, or to bedside storybook time. It’s very good.

But in addition to producing an academic program without equal, John Mark also poured himself personally into the lives of students who attended. And that’s where I feel the loss for Torrey. The Institute will keep on keeping on when Reynolds moves to Houston, and it’ll still be among the best undergraduate programs in the world, but future Biola students won’t get to sit at Reynolds’ feet like my friends and I did. I learned a lot while sitting there. I learned things that have changed the direction of my life.

Prominent among the things he taught me are the following five. You can find these ideas in Plato, Augustine, Lewis, Chesterton, and other greats to whom Torrey introduced me, but I trace my most personally meaningful encounters with them back to John Mark Reynolds. It’s because he helped me discover these things that I’m sad to see him leave the program I’ve come to love.
Through Reynolds, at Torrey, I learned that….
1 – Deepened education produces deepened love.

When I left for college, my uncle looked me in the eye and asked me not to head so far up in the ivory tower that I forgot about my family. Likewise, I’ve seen new acquaintances become suddenly less personal when they hear I studied anthropology and philosophy. A highly educated intellect just makes for personal inaccessibility, right? And, well, much of the time, yes, it does. Aspiring scholars often become snobby or prickly, and their social networks become closed, leaving others outside.
But Reynolds modeled and advocated a different, brighter purpose for increased education: increased love. He taught me that love is communicated between people by means of things they share, and that the more they have to share, the better they can communicate their love. Every new word added to my vocabulary, every conversational skill, every book I read or film I watch could become a conduit for friendship or (Reynolds’ favorite) for flirting. Rather than demanding that others step up to whatever I appreciate and rejecting them if they don’t, Reynolds taught me to use every new appreciation as a means for reaching out to others.
And he’s right (though it’s not often recommended): it’s possible to flirt using logic.
2 – Morality is bound up with joy.

Education isn’t the only characteristic with a reputation for stuffiness. If anything, morality has it beat. Being good and having fun: they’re opposites, right?
Not so with the good doctor. He exudes a downright other-worldly confidence that God’s rules for good living end up being the same as God’s rules for joyful living. He teaches me that part of what it means that “the Sabbath [and any law] was made for man” is that God’s laws must fit with human exuberance. He taught me to honestly believe in the delightful kingdom that Christ is coming to establish, and to look forward to it by pursuing foretastes of it now. Anything that’s bad turns out to be bad because it dilutes the delight of God in His creations and of His creations in each other and Him. Joy is at the center of things.
“What happened to jollification?” he asks, while blowing bubbles in the academic office, or balancing a spoon on his nose, or making puppets out of marshmallows and toothpicks. When you’re around him, you can’t help but wonder that too.
3 – Excellence isn’t perfection, and that’s a good thing.

If you’ve heard him say it once, you’ve heard it a thousand times: “Don’t let the perfect be the enemy of the good.” Whether he’s advocating for amateur theatre and writing rushed plays for high school homeschool performers, or encouraging a disheartened student to keep on working when they didn’t meet their own expectations, or diffusing premature grumpiness in tech-impaired twenty-somethings who wish we still got around on horses, Reynolds reminds me that working in the real world is always better than grouching from an ideal one.
That principle ends up being at the center of most endurance. Without sacrificing idealism, we have to become people who work with what’s at hand and who strive to do our best, whatever that best might be. If we can learn to follow the principle, we’ll keep on being messy people, but we’ll be messy people who’ve made and done a bunch of nifty things, and that’s pretty darn desirable, relatively speaking.
4 – Everything can be questioned; the truth will out.

It has (thank goodness!) become an old Christian adage by now that “all truth is God’s truth,” but John Mark has a way of living it out that always refreshes me. He applies it in every direction, from the eager examination and discussion of cultural kitsch to the unblinking exploration of life’s hardest questions and Christianity’s strongest challenges. He deeply, purely believes that any question asked with honesty and humility in submission to Christ–any question–is a step taken toward truth. As best he can (and better than just about anyone I know) he strives to root out any fear, bias, or condescension that would block true questions or create dishonest ones.
This was refreshing to me as a eager, clean-out-of-the-press, happy Christian student, and it was salvific for some of my friends whose doubts and questions had been inappropriately suppressed. It involves a deep trust in God’s good intentions for us, and a rigorous commitment to honesty, humility, and hope. It means taking Christ at his word when he says, “Seek, and you will find.”
5 – Change need never be fearful.

Visiting one part of the Reynolds’ house can be something like visiting a blinking museum of technological development. An (in?)famous “first adopter,” John Mark can get downright giddy about tech’s new directions, and it shows. Yet step a room or two over, and you’ll find yourself in a space stuffed with images of czars and saints and kings and philosophers.  It can be a bit head-spinning at first, but before too long you begin to wonder why everyone else doesn’t just follow suit.
You see, Reynolds has never been too impressed by the theory that everything inevitably gets better all the time, but he doesn’t make the mistake that some anti-myth-of-progress types do: habitual nostalgia. He strives to stretch out his arms and embrace all of history, including the history that’s about to be made. He’s learned that God’s people can suffer an awful lot and still pull through, and that puts him at peace with whatever’s ahead. This wide-sweeping acceptance of what has happened and will happen allows him to look to the future keenly, and confront changes with boldness and with creativity. I wish we could all emulate him.
Because John Mark helped me discover these things while I was a student at Torrey, I’m sad to see him leave, but it’s also because he helped me discover these things that I’m proud to see him go. How could I be anything but joyful at the expectation that these ideas will spread to more people in more places? How could I not be filled with anticipation to see what this remarkable man can achieve when he sits with Robert Sloan at the helm of one of our best rising Christian universities? With a new scope for his ingenuity, and a solid base on which to build, I can’t help but think that John Mark’s years of greatest impact are still ahead of him.

John Mark, congratulations on your new position. May your love and learning be always deeper, may your life be filled with joy, may you have both room and support as you seek to excel, may you find new wonders to question and explore, and, John Mark, may your eyes be bright as you look to today’s changes and to tomorrow’s hopes. We’ll miss you at Torrey. We’re excited to expand our work with you at Wheatstone. HBU, buckle your seatbelts and get ready for a wild, jolly, and wonderful ride.