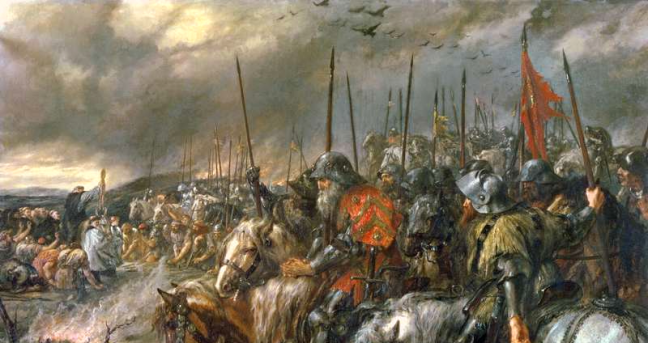 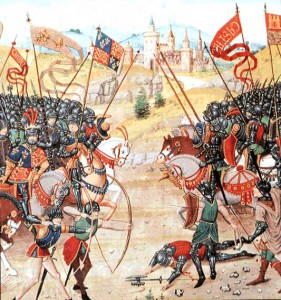 Okay, war is not really swell. But today (October 25) is the anniversary of two battles that live on in our memory because of the martial virtues conspicuously displayed in them. These battles conjured poetry from two of the greatest poets in the history of the English tongue.

First, the Battle of Agincourt, on the Feast of St. Crispin, 1415. Henry V’s outnumbered troops whooped the French with fancy footwork, English longbows, good old British pluck, and, if Shakespeare is to be believed, the greatest battlefield speech ever. Of course Shakespeare is freely inventing the words in Henry’s mouth, nearly two centuries later.

But what words! Noting how outnumbered the English army is, the king’s cousin quite sensibly remarks that he wishes some of the men at home in England were here with them now. “What!” replies King Henry. On the contrary, having more soldiers would be a major disadvantage, because then the glory of the day would have to be divided more ways.

This day is call’d the feast of Crispian.
He that outlives this day, and comes safe home,
Will stand a tip-toe when this day is nam’d,
And rouse him at the name of Crispian.
He that shall live this day, and see old age,
Will yearly on the vigil feast his neighbours,
And say ‘To-morrow is Saint Crispian.’
Then will he strip his sleeve and show his scars,
And say ‘These wounds I had on Crispian’s day.’ …

And Crispin Crispian shall ne’er go by,
From this day to the ending of the world,
But we in it shall be remembered-
We few, we happy few, we band of brothers;
For he to-day that sheds his blood with me
Shall be my brother; be he ne’er so vile,
This day shall gentle his condition;
And gentlemen in England now-a-bed
Shall think themselves accurs’d they were not here,
And hold their manhoods cheap whiles any speaks
That fought with us upon Saint Crispin’s day.

Second, the Charge of the Light Brigade during the battle of Balaklava, 1854. This was not a victory for the English, but a slaughter. Based on botched military intelligence, the commander of the British cavalry sent his men straight into the path of the heavily-armed Russian army. The Russians gunned them down easily, thinking they were probably drunk or crazy to attempt such a direct assault. But above the wasted lives, what stands out with astonishing clarity is the radical obedience and courage of the soldiers. And this is what poet laureate Alfred Lord Tennyson captured in his contemporary poem about the charge:

“Forward, the Light Brigade!”
Was there a man dismay’d?
Not tho’ the soldier knew
Someone had blunder’d:
Theirs not to make reply,
Theirs not to reason why,
Theirs but to do and die:
Into the valley of Death
Rode the six hundred.

There was a third major battle on October 25, the Battle of Leyte Gulf in 1944. It is far more epic in scope than Agincourt or Balaklava: Probably the largest naval battle that has ever been fought, it shut down the Japanese Imperial Navy. But it has not been the subject of poetry, to my knowledge. Get busy, ye poets of war!