The Common Room:
Dr. Matt Jenson and Dr. Fred Sanders discuss the topic, “What did John Wesley Make of 1 John?” 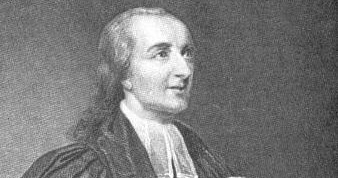 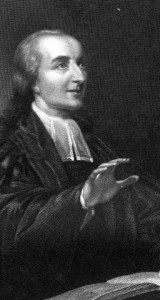 Who did John Wesley wish he could be more like? John William Fletcher (1729-1785), or, to use the French name he was given at birth, Jean Guillaume de la Flechere, a man who was famous among the early Methodists for his holiness and humility. He later became famous for particularly rambunctious anti-Calvinism, but that didn’t poison even the Reformed participants in the evangelical awakening against him.

His most important work, Checks to Antinomianism, is uneven: scarcely readable in places (like the title), but thrilling in others.

His best work, which deserves to be remembered better, is the six letters On the Spiritual Manifestation of the Son of God.

In this little book, Fletcher argues forcefully for what he elsewhere called evangelical mysticism, that is, the kind of insight into spiritual realities that is necessary for understanding the gospel experientially. Fletcher states that every believer must encounter Jesus, and have a personal meeting in which the Father reveals the Son to him. The letters insist strongly on spiritual reality, in a way that reminds the reader sometimes of Jonathan Edwards, sometimes of John Wesley, and sometimes of loopy televangelists. But Fletcher was not loopy; or if he was, may it please God to send such loopiness among us again, soon.

Martin Lloyd-Jones called the letters “undoubtedly a spiritual classic,” and noted in 1968 that

At a time like this, when many are preoccupied almost exclusively with questions of ecclesiastical organisation and realignment, and others are in danger of falling into a Corinthian and fanatical interest in spiritual phenomena, and the majority perhaps are just practising formal Christianity, nothing can be more salutary than the message of this book. It points us to the one thing that finally matters, and without which all else is more or less vain. It also points us to the highway to revival –both personal and general.

Here are a few quotables from the letters On the Spiritual Manifestation.

The Son of God, for purposes worthy of his wisdom, manifests himself, sooner or later, to all his sincere followers, in a spiritual manner, which the world knows not of.

The manifestation I contend for being of a spiritual nature, must be made to spiritual senses; and that such senses exist, and are opened in, and exercised by regenerate souls, is what I design to prove in this letter, by the joint testimony of Scripture, our Church, and reason.

In believers, this hidden man is awakened and raised from the dead, by the power of Christ’s resurrection. Christ is his life, the Spirit of God is his spirit, prayer or praise his breath, holiness his health, and love his element.

If we be not perfect Stoics in religion, if we have one degree more of devotion, than the marble statues, which adorn our churches, we should have, I think, some feeling of our unworthiness, some sense of God’s majesty.

Mistake me not, sir, for the pleasure of calling me enthusiast. I do not insist, as you may imagine, upon a manifestation of the voice, body, or blood of our Lord to our external senses. Pilate heard Christ’s voice, the Jews saw his body, the soldiers handled it, and some of them were literally sprinkled with his blood; but this answered no spiritual end: they knew not God manifest in the flesh.

A manifestation of the Spirit last year will no more support a soul this year, than air breathed yesterday will nourish the flame of life to-day. The sun which warmed us last week must shine again this week. Old light is dead light. A notion of old warmth is a very cold notion.

The agent or author of every Divine manifestation is the eternal God, one in three, and three in one. The Father reveals, the Son freely discovers himself, and the Holy Ghost freely testifies of him. Nevertheless, the Scriptures, in general, attribute this wonder of grace to the blessed Spirit.