In one sense, portraying the Holy Spirit in baptism icons is not a problem at all: the Spirit descended in the form of a dove. The iconographer does not need to try to get behind this simple assertion of the New Testament to ask “why a dove?” For the most part, painters just seem grateful to have been given a concrete, visible way of depicting this most mysterious and elusive Person of the Trinity.

Without this God-given revealed image, how would you ever portray the Spirit? But with this data of revelation in hand, iconographers only had minor considerations to work out: Does the dove descend head-first or feet first? Does the dove carry anything with it? How large and how high should it be painted? Personally, I prefer a very large and fully-rendered dove, as in the middle Byzantine mosaics (and Ravenna, and the sarcophagi and catacombs, etc.). The tiny colorless birds of later Byzantine and Russian icons seem inadequate to the task of signifying the Spirit’s presence in a bold visual way. But this is a minor matter, a question of taste. All of these aspects can (and do) vary greatly from icon to icon, without consequence. 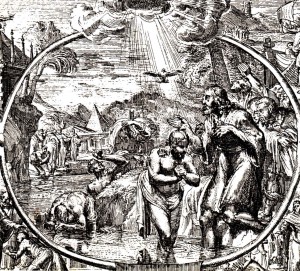 Of course typological thinking dictated that this dove would be considered in parallel with the dove who returned to Noah’s ark with an olive branch. Schiller’s Iconography of Christian Art provides an example of a miniature in which these two doves (of the ark and of the baptism) are portrayed in two parallel scenes, thus linking them typologically with absolute certainty. The allusion is a rich one: both scenes involve a dove, water, judgment, salvation, an accepted sacrifice, and the promise of peace between God and humanity. The image of the dove became such a recognizable emblem of the Holy Spirit that artists began to use it in other contexts: A dove hovering over the heads of the apostles at Pentecost made the reference to the Spirit more plain; a dove at the annunciation rendered visual the fact that the Holy Spirit was the agent there; a dove could be shown whispering into the ears of inspired writers to illustrate their inspiration. In one of the boldest intertextual applications, a mosaic at St. Mark’s in Venice illustrates Genesis 1:2 (“the Spirit of God hovered/brooded over the face of the deep”) with an image of a dove spreading her wings over turbulent water.

The Great Council of Moscow (1666-1667) did what it could to call a halt to this development, arguing that the Holy Spirit is not a dove, and did not become incarnate in a dove, but merely manifested his presence through the dove at one –and only one– point in salvation history. To remove the dove from the singular event of Christ’s baptism and use it as a portable pneumatology icon was improper (Ouspensky, Theology, 371-409). Ouspensky also mentions repeatedly the existence of an actual icon of the Holy Spirit, which apparently consisted of nothing but the dove alone. This image (possibly originating in the Novogrod school) was of course condemned, and of course continued to be made and used. For an interesting parallel western development, check out Francois Boespflugâ€™s Dieu dans l’art (p. 50-52). Pope Benedict XIV (1745) advised that the Holy Spirit should never be represented without the Father and the Son also being shown.

The baptism of Jesus in the Jordan is a focal point at which the meaning of the Christ event in its trinitarian context becomes uniquely visible. All of the themes of Christology are just below the surface of the Jordan event: Christ’s pre-existence and incarnation, his relationship with the Father and the Spirit, his voluntary self-giving and sacrifice, and his triumph over hell and death. Austin Farrer makes this observation about the baptism story:

When St. John came to write the story of Christ’s baptism, he connected it with Jacob’s dream of the ladder from heaven to earth, on which the angels of God ascended and descended (John 1:32, 51). And certainly the Baptism has so many levels of meaning in it, that without ever going outside it we can run up as though by steps from earth to heaven and down again. At the height of it is the bliss of the Trinity above all worlds, in the midst is the sonship of Jesus to his Heavenly Father; at the foot of it (and here it touches us) is the baptism of any Christian. (Austin Farrer, The Triple Victory: Christ’s Temptation According to St. Matthew, Cambridge: Cowley Publications, 1965, p. 345).

The icon itself resonates with the entire range of other images in which the story of Jesus and the salvation he accomplished are depicted. The dense visual allusions to icons of the annunciation, the nativity, the presentation in the temple, the transfiguration, the crucifixion, the descent into hell with the three days in the grave, the resurrection, and finally Pentecost are all latent images in the background of the baptism scene. Evdokimov examines some of these allusions in L’art de l’icone, especially on p. 246, as he gives an interpretation of the baptism in terms of the other major mysteries of Christ’s life. Truth rushes toward this center from all directions, to congeal in one arresting vision. The baptism icon is a compelling image of Father, Son, and Holy Spirit in perfect communion, working out human salvation. The icon and the truth it embodies can and should inform Christian life, and feed theological reflection.